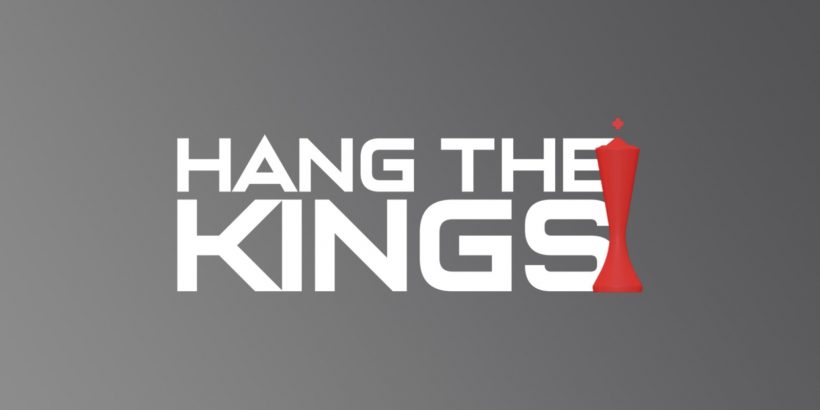 When it comes to puzzle games, you may think there’s a limit to how many iterations the same idea can have.

After all, a single set of rules should lead to a finite number of possibilities, right? Well, chess proves the contrary. With its six different types of pieces and 8×8 board, chess allows for a limitless number of actions, as players can express themselves in a variety of ways. Minimol Games have been proving that by transforming some of these rules into puzzle games with titles like Zen Chess, Knight Swap and Unlock the King. Hang the Kings has a similar approach, but with slightly different rules and objectives.

If you have played any of the aforementioned titles before, then you’ll have a good idea about what to expect from Hang the Kings. Here too, you’ll have another 100 bite-sized puzzle levels where you’ll have to play with the chess’ rules in order to progress. Again, the chessboard will take many different formats, with an ever-increasing difficultly curve between each level. Once again, you’re accompanied by a relaxing soundtrack, which blends well with a simple art-style that doesn’t get in the way of the main meat: the chess-based puzzler. Overall, Hang the Kings is so similar to Knight Swap and Unlock the King that I’m left wondering if they couldn’t be sold as a single package. However, it does has some differences.

Each one of these chess-based games by Minimol offers a unique objective, and Hang the Kings isn’t different. Between all these titles, Hang the Kings is actually the one that is closest to an actual chess game (excluding Zen Chess). Here, similarly to an actual match of chess, your main objective is to hang the king. However, you won’t do that by normal ways, using pieces of the opposing team. Instead, you’ll have to hang every single piece on the board first, then, you can hang the king and complete the level. This seems like a trivial and simple objective at first, but the game will ramp up the difficultly as you progress.

Hang the Kings does lots of interesting things in order to create different puzzle levels. Similar to Unlock the King, this game also plays with the many different chess pieces (except pawns). Thanks to that, the game is refreshing at all times, because you’ll be using and mixing different movements in each level. As mentioned before, the board is also changing constantly, taking many different forms, which obliges you to play around the limitations of the level. Finally, the last new element of Hang the Kings lies on having multiple colours at the same time. Certain levels have three or four kings of a different colour. So, you’ll need to play around with each ‘team’ of pieces, hanging them in the correct order.

The biggest flaw of Hang the Kings lies on being too similar to the other chess puzzlers, up to a point that it becomes hard to define which one is actually the best. Thanks to how it plays with the many different chess pieces, it doesn’t suffer from the same limitations of Knight Swap. Still, even then, it doesn’t do anything too different to stand out from Unlock the King or Zen Chess. With its low entry price, it becomes a good option if you want more of the same chess puzzle experience.

Hang the Kings is a puzzle game that proves that chess’ rules can be tweaked into infinite possibilities. It delivers another package of bite-sized puzzles for those who want more from games like Knight Swap, Unlock the King, or Zen Chess.