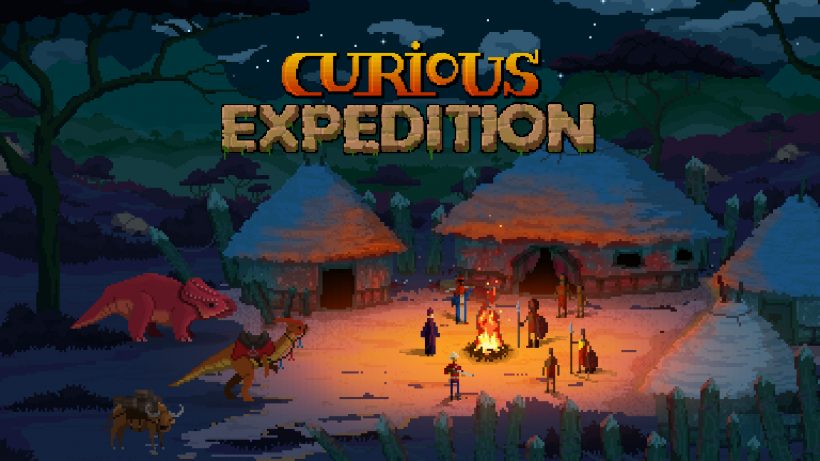 Discovery and chaos abound in Curious Expedition, where your goal is to achieve fame in the age of world exploration.

True to history, this involves taking advantage of natives, stealing sacred artefacts, and, of course, consorting with lizard people. This strategy experience pits famous figures against each other in the fight for global notoriety. Each comes with an ongoing perk, starting supplies, and a companion or two (except for that lonely weirdo, Rasputin). There is a tutorial and three difficulty modes to choose from – a godsend in a game as unforgiving as this one. RNG is at play from the get-go, presenting you with a random side quest to complete as you search for a coveted golden pyramid – the end-goal of each level.

Maps are presented in classic hexagons. It’s like a randomly-generated board game featuring different terrains, secrets, and enemies. The pixellated character sprites remain visible on the right as we watch their ultra-miniature silhouettes march in single file, revealing the surrounding tiles.

Locations with a question mark might reveal anything from a relaxing campsite to a cursed shrine. Note that one curse creates mountains, and in multiple playthroughs, this actually trapped me, blocking me from finishing the level. There is an air balloon escape option for these situations, but it’s impossible to use in the mysterious “portal world,” an issue that can only be resolved by restarting entirely.

You’re welcome to explore anywhere – that is, within the limits of your precious sanity. Luckily, sanity can be replenished with food or rest, but resting at a village, for example, might require you to trade for their trust or take part in uncomfortable rituals. It’s worth it, though, as losing your sanity or dying in combat results in a Game Over.

Indeed, if mismanaging your sanity doesn’t end your game prematurely, then a bad fight will. Combat is a turn-based dice game. Each character comes with certain dice, which can be linked for combos. Weapons can greatly enhance your chances, but it’s a matter of balancing your inventory between useful items like these and treasures to trade or take home. Losing companions means losing their item slots and abilities, and if your explorer dies, you’re done.

Speaking of inventory, this is another element of the game that players will need to carefully manage. Companions help boost your item slots, but it will always be a matter of prioritising what’s most useful. Once you reach the pyramid, you can sail home with the treasures you’ve collected and either trade them in for fame (which ultimately leads to victory) or for money. Finishing an expedition will also earn your character a medal, which grants them a powerful boost, be it an extra combat die or the inexplicable ability to randomly find bullets.

Completing an entire game is an uphill battle – and no, not because the soundtrack, with its stale drum kits and synth sounds, is boring and repetitive. It’s because beating a round of Curious Expedition might require dozens of tries due to the random nature of the game, which is a pleasure for fans of the genre and, perhaps, a frustration for those who like to have more power over the end result of the game.

Developer Maschinen-Mensch is already poised to release Curious Expedition 2 later this year. Indeed, the first game in this soon-to-be series is a solid strategy experience deserving of a glow-up.

Strategy and board game fans seeking a mixture of challenge, quirkiness, and randomly-generated excitement will find that in Curious Expedition. Although its simple presentation and unforgiving nature may turn off some, it’s a well-rounded, replayable experience.