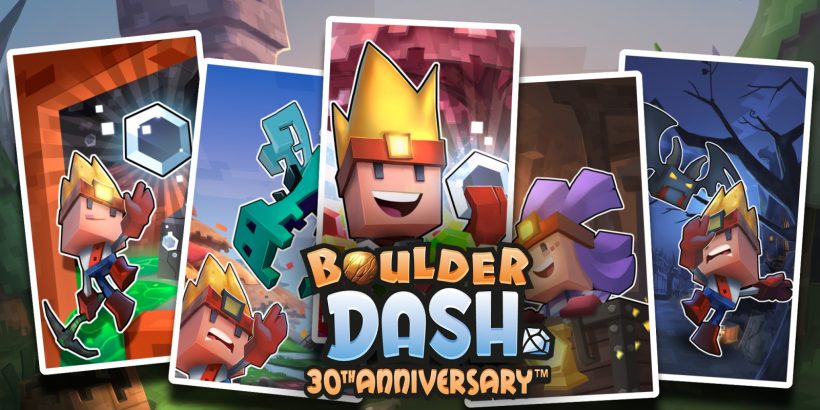 Well, this is a sign of the times. When the original Boulder Dash first arrived in the 80s, the pixelated adventures of Rockford were an exciting fit for the 8-bit era: puzzle challenges that required careful planning to dig a route through the soil and earn gems while avoiding dangerous obstacles. Now, in 2020, this latest version (and there have been many versions of Boulder Dash) for Nintendo Switch retains the fundamental themes of the game, but its origins as a freemium mobile phone game are evident in the rather convoluted menu system and the character upgrades and bonuses on offer.

Boulder Dash presents the unusual mix of a side-scrolling 2D perspective with paths of movement that suggest a top-down view. Press the thumb-stick in any direction and Rockford will smoothly dig through the soil. But the boulders that he encounters are affected by gravity and can be pushed “down” the screen to crush an enemy below, or inadvertently block the route that you were hoping to take. It does not take long to adjust to the surreal physics of Boulder Dash (especially if you have played a previous version) and there are several helpful tutorial levels to aid the player.

Rockford’s latest adventure is generous in the number of levels to explore. Themed bundles of levels are unlocked once you earn a certain number of stars, and the stars are rewarded depending on how many points you earn in a level. As the game progresses, new enemies are introduced, as well as other quirky features to enrich the puzzle element. On Normal play mode, a time limit ticks away as you try and dig for the required number of gems to open the exit. Casual mode removes the urgency of the timer, and Hardcore mode (which would be a great pun if it wasn’t for the fact that the word is used in every kind of video game, and not just the ones about digging through the ground) makes the gems just as deadly as the boulders, in that if they drop on Rockford’s head, it’s game over.

Our subterranean hero has a few tricks up his dirt-spattered sleeves, including a spyglass to scroll around the play area to view the lay of the land, and sticks of dynamite that can clear an otherwise impenetrable path. The latter can be a puzzle-breaker at times, although they come in handy when you have accidentally blocked your only route to the exit, thanks to a fallen boulder. Boulder Dash 30th Anniversary is the sort of game that requires many a restart, especially in the later levels when one dig in the wrong direction can mean there is no way to solve the challenge. But the game has been designed to play for a quick-fix, and each level often only takes a matter of minutes (or seconds in some cases).

Other characters besides Rockford can be unlocked as you progress and each has a bonus that tweaks gameplay a little, including retro-themed characters that allude to those nostalgic 8-bit days. The graphics and sound are crisp and efficient, although lacking in charm. Is there enough here to tempt you to explore underground? The 30th anniversary of Boulder Dash was not high on my agenda for 2020 (mainly because it is not strictly the 30th anniversary, as the original was released in 1984) but if you are a fan of the franchise, dig in.

The original Boulder Dash format has been given a buff and a sheen. This anniversary edition presents an accessible remake that is lacking in soul. Perhaps a little more digging would have unearthed more of a gem.