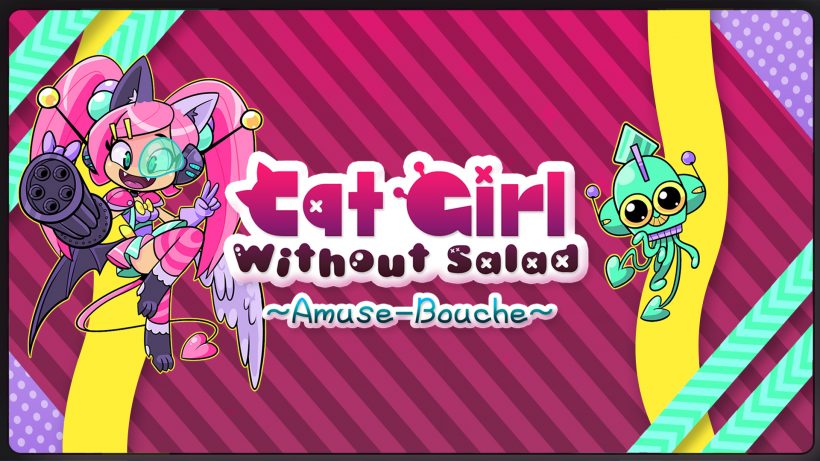 There’s a lot to like about Cat Girl Without Salad: Amuse-Bouche, name notwithstanding. The clean, colourful aesthetic does wonders for the overall enjoyment and perfectly complements the tone. The range of weapons available to Kebako, a “cat-eared intergalactic bounty hunter”, are easily some of the most smile-inducing found within the 2D shoot-’em-up genre, taking inspiration from puzzle games to RPG’s and, weirdly, everything in between. Yet, whilst esteemed developer WayForward Technologies – developers of Shantae, amongst other titles – is certainly aware of the enjoyable nature of Cat Girl, the overall execution is somewhat skewed in balance and, unfortunately, makes this more of a slog than it needs to be.

Starting its life as an April Fool’s joke in 2013, Cat Girl was brought to life on PC, exclusively in July 2016’s Humble Bundle. This Switch release, then, marks the title’s first console release – one that no one expected and, seemingly, no one asked for. Regardless, Cat Girl focuses on the “story” of Kebako, the aforementioned protagonist, and her companion, Squiddie, as they battle near-endless hordes of enemies, eventually leading up to the mandatory boss. As I’ve mentioned in previous 2D shoot-’em-up reviews, specifically Finger Freedom, the narrative is largely inconsequential. However, unlike Freedom Finger, WayForward doesn’t appear to put the effort in to give it the same character that the art style exudes. Still, it neither adds nor detracts from the content as a whole, but still provides that loose narrative undertone that pushes you along the beaten path.

And what a long, boring beaten path it is. Let me clarify: what a long, boring beaten path it becomes. The gameplay is seriously great; it’s full of character, charm, and whimsy that other 2D shooters lack. The uniqueness comes from the addition of genre-bending powerups, borrowing mechanics found in a wide multitude of other titles. For example, an RPG powerup transforms your weapon into a Final Fantasy-styled battle menu, complete with Attack, Magic and so forth, with the Attack command conjuring a Final Fantasy VIII Gunblade-esque weapon directly in front of you. The powerups are copious in appearance, and you’ll find yourself swapping between those available on a regular basis, whether due to the quantity floating around or you getting hit by an enemy projectile. Despite the unique flavour of the weapons available, I never felt more comfortable and more efficient when using the stock weapon. It was reliable and took little effort to use alongside dodging the influx of attacks that came my way.

Sadly, levels are too long, to the point where no amount of genre-defying powerups can save the early onset of boredom mere minutes into a gameplay session. It had me questioning whether I was stuck in a never-ending loop, forever trapped in a Saturday-morning cartoon, never to see the light of challenging gameplay again. When the onslaught of uninspired enemies did come to a close, only to be greeted by a boss that looked as if they were left on the cutting room floor of a Scott Pilgrim follow-up, I was initially pleased. A second later, however, I discovered they were bullet sponges, which left me feeling both deflated and defeated – despite the challenge being nigh-on nonexistent. Hit detection for Kebako sees to that, as It’s essentially non-existent.

Unfortunately, any lasting impression that Cat Girl Without Salad: Amuse-Bouche had on me is likely to just pass on by. It’s a shame, really, but not wholly unexpected.

Cat Girl Without Salad: Amuse-Bouche originated as a joke, but ultimately ends up as a bore. Yes, there’s some fun to be found within those two ends of the spectrum, but those moments are fleeting and never quite justify your time spent with it.