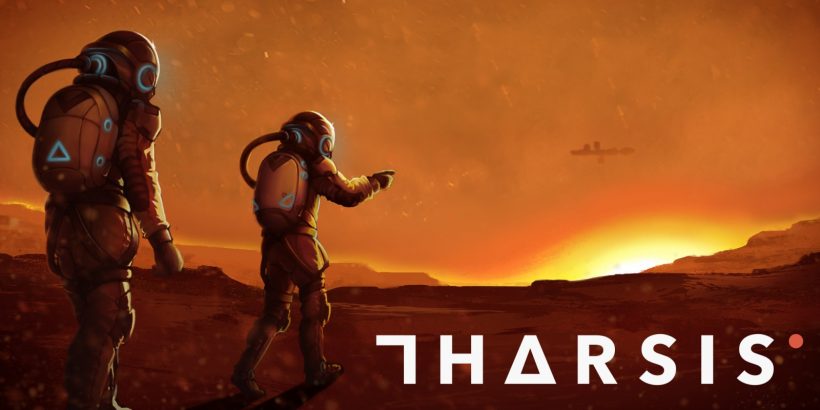 In Tharsis, no-one can hear you scream, or at least no-one would care if you did. This digital tabletop game by Choice Provisions offers a punishing space survival experience that relies a little too heavily on luck to be reliably enjoyable.

The concept is a simple one: You’re part of a crew of astronauts making a 10-week trip to Mars. During your journey, you’ll encounter unexpected deadly events that require you to maintain the crew’s physical and mental well-being to get to the finish line. Each “week” in transit is considered a turn, and during that turn, you’ll need to fix specific modules aboard the ship that you think will bring the most benefit, the success of which is based on dice-rolling. Damage to the ship is calculated in numerical value, and you’ll need to move a crew member or members to that damaged module and roll the dice to see if you can meet the required number to save everyone from certain doom.

Naturally, it’s not quite that simple, and there are other mechanics that complicate things. As in real life, crew members get tired, and to remain effective, dice must be kept topped up. A fully capable crew member can roll 5 dice, but an exhausted one will only be able to roll 1 die. The health of your crew must also be considered, as a drop to 0 will remove them from play. These, among other things, can be maintained by using the ship’s modules. The life support module will allow the crew to regain some dice, but perhaps it’s wiser to repair your hull instead. Furthermore, each crew member has a special skill that grants them bonuses. These decisions are where the strategy of the game lies, and in a kind of Yahtzee style of play, assigning dice to different functions that work best is key.

In between turns, you will need to select a side project that will help and hinder your crew in some way. You may be able to increase your crew’s dice, but you’ll lose health in return. Dice can also be regained between turns by feeding your crew, assuming you have food available. In a rather chilling tone, dead bodies can be cannibalised for dice in a pinch, though this will result in a permanent reduction in their maximum health. Their dice will also be permanently bloody-spattered, which is a really nice touch.

All of this may sound a little overwhelming, but the tutorial is expertly implemented and easily digested. Tharsis’ real issue isn’t its complexity, but its painful reliance on luck and RNG. Catastrophic events can demand repeated perfect rolls from the player, and the odds are simply astronomical. It’s clear that Tharsis isn’t designed to be won on skill alone, and luck will ultimately play a large part in the experience; however, that’s the nature of a game based primarily on dice rolls. The problem is that the proportion of strategy to luck favours the latter too highly, making any strategy employed feel null and void, which can often leave a sour taste.

Tharsis is a bold, brash game that delivers some clever dice-rolling mechanics, thus creating a much better digital tabletop experience than many actual franchise emulations have managed. It is, however, a very lonely experience, one that’s met often with sudden, unavoidable catastrophes that can make all your work seem for nothing – and that’s its biggest misstep.

Tharsis captures the ethos of a tabletop game perfectly, with layered, easy-to-learn mechanics and dynamic presentation. But with too much emphasis on luck, losses often feel unfair, making this a recommendation for intrigued tabletop gaming fans only.