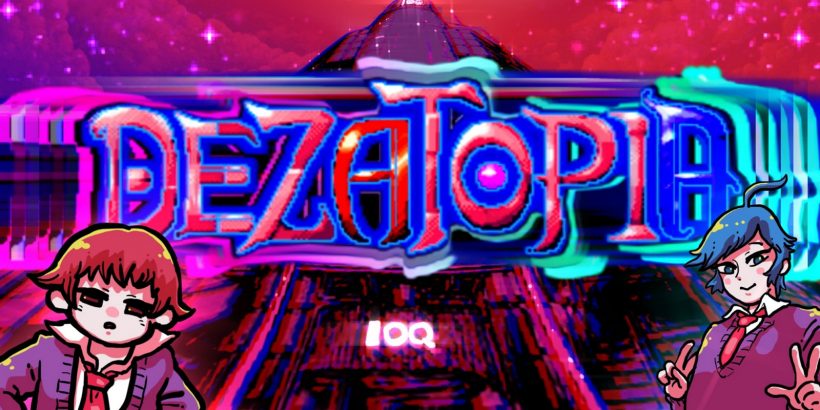 Bullet-hell SHMUPs are quick to raise strong feelings for gamers – typically anxiety – but provide an exciting challenge for those crazy gaming masochists.

Dezatopia bolsters its frantic gameplay with plate-spinning combat expectations on the player. Be prepared for mania, but amidst the chaos there’s creativity at work, and Dezatopia provides an extremely satisfying shooter with enough personal twists on the formula to stand out from the crowd.

At the heart of every SHMUP is its ship, and Dezatopia’s is an interesting beast, featuring four unique weapons for situational use. On the nose you’ll find a full-powered cannon for tackling the majority of your foes. The top and back feature differing bullet-spread weaponry, and your lower-side weapon is a uniquely designed water cannon that literally drips on top of enemies with surprisingly destructive power. I was also impressed to see that it had other uses such as watering plants that would grow and reward the player for their efforts – an unexpected but lovely touch.

Turning any of these weapons on will cause it to remain on until you switch it off, and as enemies can appear from any direction at any time, your natural instinct may be to have all four cannons running constantly, but be warned, each weapon operating slows your ship down, making it difficult to dodge hazards. The subtle art then becomes balancing the use of your arsenal to ensure maximum manoeuvrability as well as optimum offensive force.

Dezatopia’s story is entirely optional, and doesn’t impose itself in the slightest for action-focused players. All story is gathered via a huge array of collectables scattered through the worlds, which is great for someone like me that just wants to blow stuff up – which incidentally Dezatopia does very well. Bosses are a shining jewel in Dezatopia’s crown, creatively designed to force you to employ quick-thinking tactics and to switch up between your weapons intelligently if you want to survive. If you are struggling, the difficulty dynamically adjusts itself for your next run based on your performance, but this can always be overridden.

Instead of one campaign, there are a number of different “routes” that can be selected – akin to the Super Nintendo’s Starwing – each one consisting of 4 or 5 levels. The developers have gone to great lengths to mix up the structure with different enemies and a rotation of bosses to avoid repetition, and it works very nicely. However all routes ultimately result with the same end target, and that is to enter “Momoko’s Tower” – a challenging gauntlet leading to the final boss that the player is only granted access to should they meet a unique requirement set out for that route, typically something like reaching a certain score or completing within a certain time.

Dezatopia is visually very striking, full of colours, shapes and movement. There are times when the busyness gets too much for the Switch to handle, and the frame-rate buckles under the pressure, but it’s an acceptable dip to what is otherwise an impressive aesthetic show. Throw on top of this a banging 52 track chip-tune soundtrack, perfectly complimenting the mayhem of gameplay, getting your blood pumping at a ferocious tempo, and you’ve got one audio-visual treat for the player.

If you’re a fan of the genre then Dezatopia is a no-brainer. It looks and sounds great; the gameplay is fluid and adrenaline-fuelled, and the level remixes, seemingly endless collectables and reactive difficulty curve provide a lot of bang for your buck.

Dezatopia provides intense, adrenaline-pumped gameplay with intelligent combat tactics and plenty of replayability. Supported by vibrant visuals and a blistering soundtrack, it’s a killer title worth the attention of any genre fan.