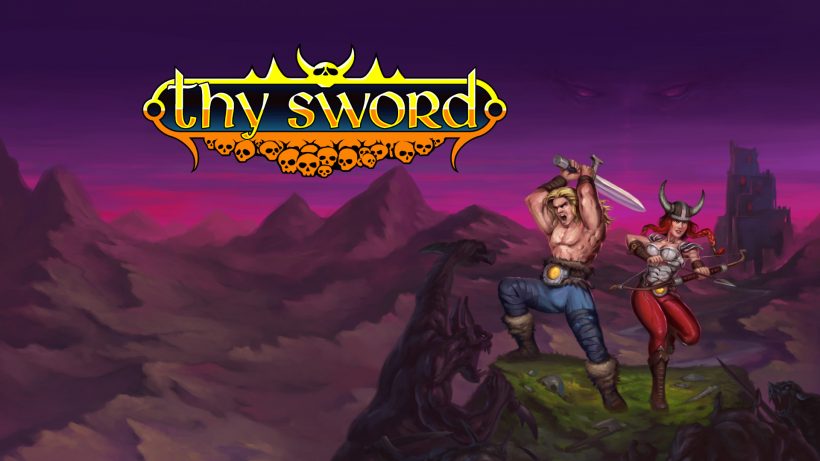 The game’s deceptively simple presentation may lead you to believe this is nothing more than another piece of throwaway Switch shovelware, but once the game gets its lo-fi hooks into you, your precious free time will magically disappear before you know what happened. I just wish the game had a bit more content to keep me coming back for more.

After choosing between two heroes (Barbarian and Valkyrie, though you’ll unlock more as the game progresses), you’ll embark on a quest to free the world from the diabolical tyranny of the generically named Dark Overlord. Of course, before you can face this fiend head-on, you’ll need to squash several menacing bosses and acquire powerful gems they have in their possession. In other words, it’s typical high-fantasy fiddle-faddle.

Each level takes place in a single room filled with various platforms and monsters. Once you’ve cleared the space of all those pesky foes, you’ll journey through a previously locked door and do it all over again. To keep you from getting bored, the game throws in some light procedural generation, which makes each level slightly unique. It’s nothing mind-blowing or game-changing, but the shifting layouts do an admirable job of keeping the gameplay fresh, which helps keep things interesting several hours in.

And although this is essentially an arcade game, Thy Sword certainly won’t tax your reflexes. Enemies follow very simple, very strict patterns, and once you know them by heart, taking them down won’t pose any problems. In addition to a basic attack and a simple block, you have a special move that deals a fair amount of damage if you can get the timing just right. Those who opt for the Valkyrie will have access to the longbow right out of the game, but Barbarians can pick that up later if they so choose.

In-between areas, your hero will visit an encampment, where you can purchase upgraded weapons, extra lives, health potions, and other trinkets and doo-dads to help you destroy the evil Dark Overlord. And if you’re the gambling sort, players can slap their gold coins on the table and play a round of Blackjack. Be warned: The mocking laughter issued by the dealer when you lose can crush even the stoutest of souls.

Since Thy Sword is an absolute blast the play, thanks to its adorable pixel artwork and responsive controls, it’s a shame the game doesn’t have a lot of content. Exploring Thy Sword from top to bottom requires only a few hours, though at this price point, expecting anything more seems foolish. The procedurally-generated levels add some replayability, but I would have loved more areas, characters, and weapons to unlock. This may sound like a silly complaint, but the game did leave me wanting more. If we end up with a sequel, perhaps the developers will deliver a more robust experience.

All in all, Thy Sword delivers a solid hack-and-slash adventure at a very reasonable price point. The solid lo-fi aesthetic, combined with tight controls, a nice co-op system, and addictive gameplay, make this a must-have for those who enjoy these old-school homages to a simpler time in gaming history. Unfortunately, while the adventure offers roguelite elements and procedurally-generated levels, chances are you won’t come back for more once you’ve finished the campaign.

Thy Sword looks great and controls like a dream. However, these wonderful traits, combined with the procedurally generated levels and roguelite elements, aren’t enough to keep you coming back once you’ve finished the campaign.