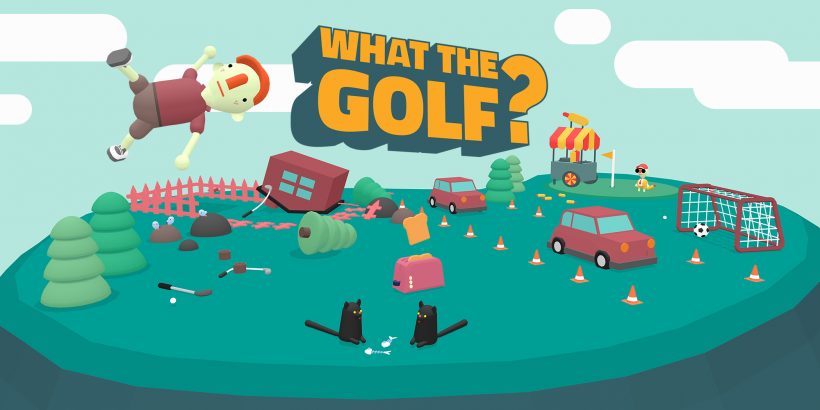 I’ve played real golf a grand total of once in my life and am not ashamed to say I rather disliked the experience.

In contrast, video games that attempt to do something new with the golf formula are something I’ve previously enjoyed; Golf Peaks comes to mind as one such title which takes the golfing concept and combines it with new elements for a pleasant use of your time. In this vein, you may expect that What the Golf? would be the perfect game for me: billed as a physics-based golf parody made by developers who, by their own admission, know nothing about golf, it should appeal to my non-golfer sensibilities, while providing some variety and light-hearted fun to boot.

The campaign constitutes the bulk of the game, offering approximately two to three hours of content built around short gimmick-filled levels. The aim is generally to manoeuvre the ball (or house, or car, or crab, or couch, or any number of the game’s other ball substitutes) to the flag. Each level offers different obstacles such as dynamite, circular saws, and surveillance cameras which all do their best to stop you from achieving your goal. Add in the ragdoll physics and unexpected mechanics and it’s all just a bit nuts.

But while these gimmicks provide some interest to the world of golf, it doesn’t take long for the shine to fade. The stakes are oddly low: core levels typically require nothing more than reaching the flagpole in order to progress, and as more often than not there’s no reason to limit the number of moves you use (unless you’re going for a place on the leaderboards), it’s frequently the path of least resistance to brute force your way through levels by spamming them. Challenge levels do offer additional restrictions and successful completion of these will reward you with collectables, but even so, the fundamental gameplay stays the same, and despite clear effort to keep things fresh, it does get repetitive.

There’s no shortage of references in What the Golf?, with many levels paying homage to different video games. Portal and Super Mario both make an appearance, as do a number of indies; the levels inspired by SUPERHOT stand out as some of the best in the game, both visually and mechanically, although I’m not sure whether that speaks more to the brilliance of that game rather than saying anything about What the Golf? itself.

What the Golf? also offers a two-player local multiplayer mode, where you and another player battle it out in ten randomly chosen levels before an ultimate fight-to-the-death. When I was checking out the mode, it became clear just how much damn fun the main game could have been by increasing the stakes and adding some human unpredictability and competitiveness to the mix.

Unfortunately, though, there’s little getting away from the fact that for all the gimmicks, What the Golf? is fundamentally just a game about moving an object from point A to point B as many times as it takes to finish the game – and sure, while technically the same may be said about other games, here it does feel as repetitive as it sounds. In the absence of any real objective or purpose, the game plays like busywork; the most fun you’ll have here is with the local multiplayer, but even this mode lacks the longevity you’d look for in a really solid party game.

Gimmicks and references can only carry a game so far, and in What the Golf?, what’s lying beneath these is lacking the substance of a truly worthwhile experience. With its higher stakes and unpredictability, though, the multiplayer mode shows more promise.