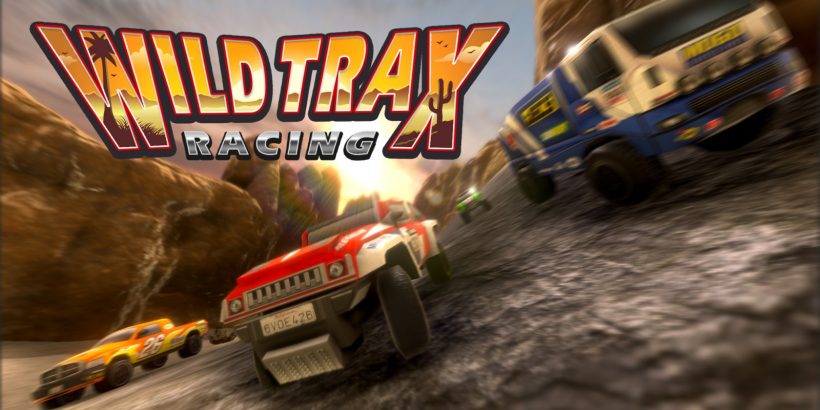 ‘This will be a race to remember!’ announces the narrator as the camera glides over the track to settle on your 4×4 vehicle. After a three-second countdown and a green light, the race begins. WildTrax Racing finds itself on a starting grid filled with many other racing games on the Switch, begging the question: Can it offer a unique twist or a fun ride to ensure success?

Visually, the game is, if not a feast for the eyes, certainly adequate to convey a sense of speed in some overwhelmingly brown racing environments. There are only three tracks to choose from, which are all available from the start of the game, and the journey is a continual route rather than repeated laps. To perhaps distinguish itself from other racers, the tracks are very wide; if you are after a game with tight racing lines, then this isn’t for you. An arrow overhead indicates the direction you should head, although there is lots of room to weave to and fro. There are rocks and trees to avoid, but the collision detection is suspicious enough that you can drive straight through some of them.

Your car begins each race in 50th position (yes, fiftieth), and each opponent appears to drive at a pre-defined path with little jostling between them. You can nudge into other vehicles, although this won’t result in anything more dynamic than a spin. Passing a checkpoint will add extra time, but strangely, the second track is much more generous with these checkpoints, compared to the first.

Only one vehicle is available at the beginning, but completing a race to claim victory unlocks another vehicle. The initial car can be a little awkward, but I had more fun with the vehicle that was subsequently unlocked. Occasionally, all the vehicles seem to jolt erratically (if you are suspicious of the responsiveness of your Joy-Cons, this is the game to test your patience), and if you come to a halt while going uphill, it is incredibly difficult to accelerate again. A turbo feature is available for a speed boost, but with the starter car, activating its turbo was about as exciting as the real-world equivalent of going from third to fourth gear.

Unfortunately, the whole ride is a bit lacklustre. The in-game timer is a marriage of brown and grey that hardly sets the pulse racing, and even the male voice stating ‘Checkpoint!’ during the race sounds only mildly thrilled, like he’s got better things to do than watch you mount a rock in an otherwise open space. The generic rock music also does little to excite.

The inclusion of a split-screen multiplayer mode for up to 4 players adds some potential. The lack of a timer or AI opposition provides the chance for amusing rivalry between friends.

In solo play, however, WildTrax Racing is too limited (three tracks, four different playable cars) to provide any long-term interest, and the handling is too patchy. The whole package seems a little rough around the edges, and there are errors that should have been spotted before the game arrived on the eShop. From collision detection issues to text errors that escaped a proof-read, there are problems big and small that overwhelm the potential to genuinely enjoy the game. The foundations are present for a fun ride, but there are too many faults to pass the MOT.

A race to remember? A race best forgotten, unfortunately.

There is a distinct lack of content in WildTrax Racing, and what little it has is barely road-worthy, with technical issues that restrict enjoyment and a lack of variety. My advice: Use alternative transport.