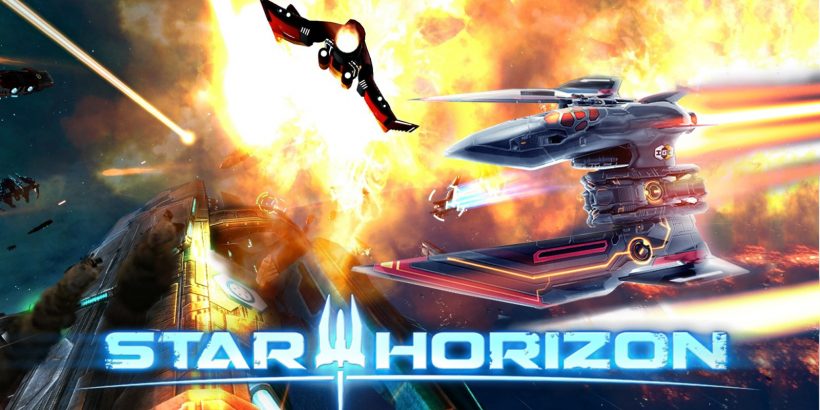 A space shooter first released a long time ago, on an online storefront far, far away, Star Horizon attempts in part with similar gameplay to fill the modern Star Fox void on the eShop. Under the hood is an intriguing narrative throughline with some promising story-altering choices, but the bland voice acting and simplistic gameplay make this one a little too ‘spaced out’ to compete properly with McCloud and co. That’s Fox McCloud if you were wondering, not Kevin McCloud of Grand Designs fame. You weren’t wondering, were you?

As a port of a now six-year-old mobile game that’s been on many different platforms, Star Horizon’s visuals aren’t anything special, but they’re pleasant and smooth enough in handheld mode. The bigger issue is the bland and generic designs themselves. Perhaps Kevin could have a been a good help, after all. Again, taking inspiration from Star Wars and Star Fox, the levels look like the space battle scene over Coruscant from the start of Revenge of the Sith, with the trench run scene from A New Hope also mirrored fairly closely.

Flying your ‘Federation’ aircraft with an AI that controls your overall flight path, you’ll assume the role of pilot John, who is sent into automatic hibernation after the Federation’s mothership is damaged via an exposed exhaust vent (sound familiar?). Upon awakening, John must figure out what has happened since he’s been out, reconnecting with his group and also perhaps making some big decisions along the way. I get the moral dilemma idea of what the game was going for, and it’s interesting being part of the ‘opposing force’ for once, but the choices feel a little less than Telltale when they don’t ultimately seem to affect the linear trajectory of the game’s ten levels.

In terms of gameplay, you’ll be flying through battlefields, asteroid fields, and even minefields in a series of on-rails space shooting set pieces, all while John lets out the same few quips repeatedly when firing at an enemy or barrel-rolling away from an oncoming missile. Perhaps that hibernation got to his head? You’ll have three types of attack: a standard laser, a missile cluster, and then a plasma cannon. It’s basic, which is understandable given that it was originally a mobile game, but it controls smoothly with the analogue stick. One big pet peeve is that enemies when flying into view of your reticle seem to be able to unfairly shoot you from off-screen, so you’ll often have to pre-emptively roll around in a bit of a guessing game.

As you progress, you’ll earn credits that can then be used to upgrade the various aspects of your ship, which you’ll certainly need to make it through some of the later stages in one piece. Sometimes you’ll have to replay a level a few times to save up some extra points, but the weapon improvements are satisfying to use, and cosmetic differences in the armour make for a nice sense of progression.

With a distinct lack of Star Fox in the Switch library at the moment (aside from the original SNES game and its unreleased sequel in the online catalogue), Star Horizon is a welcome – if generic – addition to the growing eShop. The ten levels do have some variety to them, but overall it’s pretty bland, and there’s likely better space-age excitement to be had if you’re willing to explore the Switch ecosystem.

Some dodgy voice acting and a generally generic aesthetic don’t do a great job of boosting this Star Fox-esque shooter into hyperspace. However, fans of the genre might find some fun in amongst the asteroid field of Star Wars references.