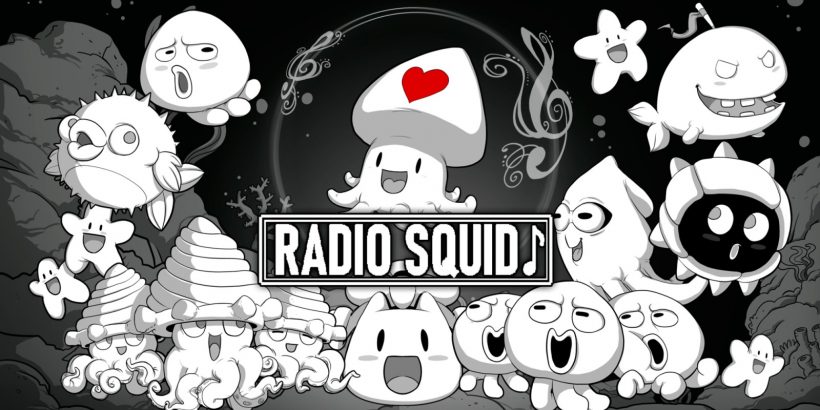 I love the Game Boy.

It’s such an iconic machine filled with genuinely playable games and a monochrome colour palette that retains a certain charm. Nostalgia can work wonders for us gamers, and Radio Squid is one of the latest indies to go 8-bit on us.

The retro graphics present a fresh and quirky appearance that belies a game lacking in content. There’s a rather odd (and if I’m honest, a little incomprehensible) backstory about the squid of the title being called into action to release “the power of the siren song” that is trapped within bubbles in each room of the game. Your squid can move multi-directionally using the left stick, and once you reach and pop the bubble on each screen, the squid gains the ability to fire bullets. Clear the room of enemy creatures, and you can move on to the next screen and repeat the process.

The on-screen play area is quite constrictive in size, given the proportions of the sprites, and there is little room for manoeuvre for a game that is encouraging you to play tactically. Once the note bubble has been popped, your squid fires bullets in an auto-fire manner; all you can do is change the trajectory of the bullets with the right stick.

Unfortunately, your own bullets can prove fatal to your squid, and these bullets can wrap around either side of the screen (if the room has openings on both sides) or indeed rebound off the walls. This means that the longer time you spend clearing a room of enemies, the more of your own bullets will be ricocheting around the play area. For this reason, you will want to line your squid up correctly to angle the bullets to eliminate the enemies as quickly as possible.

If this sounds like bullet-hell chaos, you could well be right. But it’s not particularly interesting chaos, and as the game continues there is little in the way of gameplay variety. After your squid takes a certain number of hits, the health bar will fully deplete, and you will lose a life. It’s not the end however: every enemy destroyed drops coins, and these coins can be spent to gain new lives. All the while a timer ticks on the periphery, recording the length of time that you have spent trying to make sense of this squid’s poor existence (present here for the benefit of speedrunners, I presume).

After completing a certain number of rooms, a boss fight will be your last challenge before reaching a save screen and the chance to spend coins on upgrades to help in your quest. There are a limited number of bombs available for those moments when you feel you are cornered, which – when activated – turn any on-screen bullets into more coins. Even without the upgrades, there are enough coins around to keep you stocked up on spare lives to take you to the end.

If you grit your teeth (which squid have, apparently) and swim on through this underwater shooter, you can expect to complete the game without too much of a challenge. The monochrome graphics are distinctive, and the chiptune beats that accompany the action are very decent. But aside from the polished presentation, Radio Squid does not have enough depth (ironically for an underwater game) to keep you enthralled. Each level is more of the same with little evolution in gameplay mechanics. Not a lot of content for nearly five squid.

Defeat will come often when there are so many bullets pinging around Radio Squid’s restrictive play area; it’s near impossible to get any momentum going. This is an underwater journey that is repetitive and frustrating. Swim elsewhere!