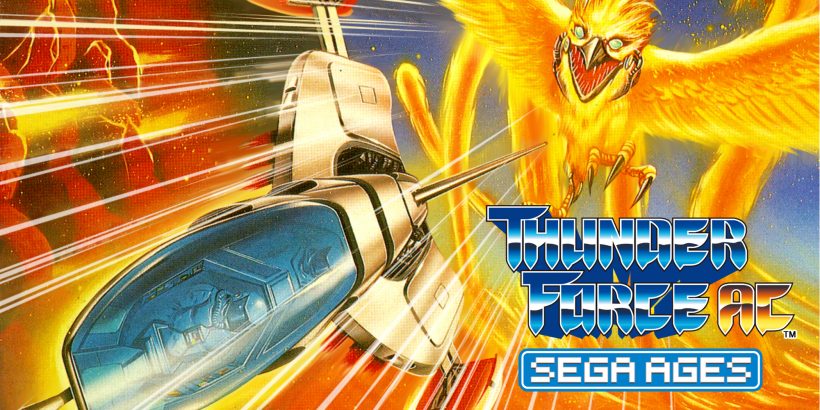 There are some genres which keep on coming back, again and again.

Yep, platformers, racers and shooters are amongst the many game types which have stood the test of time, but side-scrolling space shooters seem to have been around for as long as gaming itself.

Thunder Force AC was the fifth title released in the Thunder Force series of side-scrolling space shooters. With the AC representing its status as an arcade game (obviously), the first time this game saw a release on a Nintendo system, it was under the name of Thunder Spirits on the Super NES. It was back in 2018 that the Sega Ages series first came to Switch, with Thunder Force IV, and the presentation of that game remains in place here – you can choose from a number of different backdrops to set behind the main game screen, which occupies the centre of your TV or Switch screen. Alternatively, you can stretch the game out to fit the entire screen, or opt for the pixel-perfect recreation of the original.

Other than seeking out the original SNES version – which would probably set you back a lot of time, effort and money – the Switch version is the best way to experience the game. It’s the Sega Ages treatment which adds to the value of the package, with the Arcade Mode allowing you to play the game as it was meant to be played, while a ‘Kids Mode’ makes things easier for the less sadistic of modern-day gamers by upping your credits to nine from the standard six. The word sadistic isn’t an understatement – Thunder Force AC can provide for a tough challenge. And, of course, you can actually save the game this time, something which players in the 90s would have cackled in your face for even suggesting. Elsewhere, you can unlock ships from the other Thunder Force games, or go for gold in the rankings.

The game itself, however, has always been a little on the short side, owing to its arcade past. Other than the aspects you’d expect of a side-scrolling space shooter – taking out enemy ships whilst dodging enemy fire, collecting perks and weapon upgrades along the way before taking out an end-of-level boss – one of the trickiest parts of the game is simply avoiding the non-sentient environments. The game’s colouring and design often make it unclear where the safe area ends and the danger begins, and with the general colour scheme being quite dark, you’ll often dodge parts of the environment which are actually in the background but which you wouldn’t know for sure until you’ve flown through them.

More could be made of Thunder Force AC’s chiptune soundtrack were it not for the fact that the constant pew-pew-pew of the shooting will always overshadow it. That’s one of the inescapable drawbacks of the shooters of this era – you want to have the most authentic experience possible, but boy do the shooting effects become annoying. They’re enough to drive anyone watching you play insane. Bearing in mind that the game is structured so that you can hold down the fire button for the entirety of every level, you might find yourself experimenting with the weapon choices just to find one that makes a less annoying sound.

Even with that taken into account, Thunder Force AC is a competent space shooter with an intriguing past. Oh, and make sure you don’t turn on the autofire option, so you don’t out yourself as a big massive cheater.

Thunder Force AC may not be the shining light of the SEGA AGES collection, but space shooter fans and high-score enthusiasts will certainly be able to enjoy the experience. It’s short, but decent enough arcade fun.