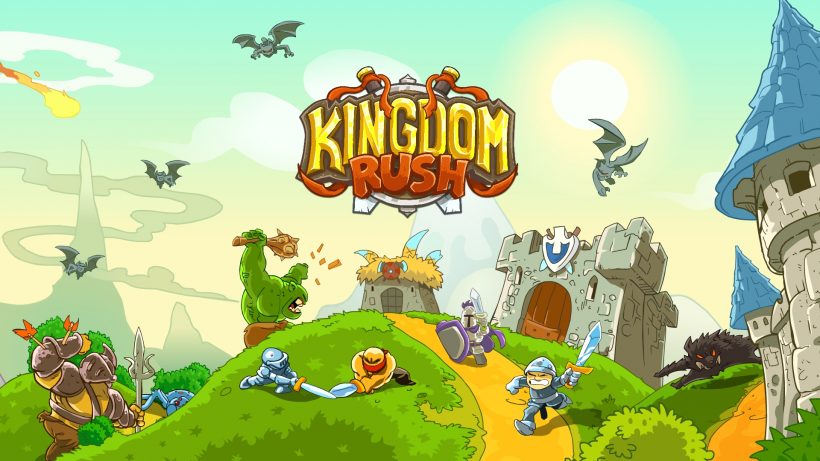 Mobile games, often repetitive by nature, can be hit or miss on PC and consoles. Kingdom Rush, like its first sequel Kingdom Rush Frontiers, is a major hit on the Switch. This simple tower defence game is a surprising gem packed with nonstop action and replayability.

We’re on a mission to protect the kingdom from evil forces – and that’s about all you need to know about the plot. The cliche story is told through mission briefings and illustrated panels. As the tale breaches darker territory, levels get significantly more challenging. Thankfully, the difficulty level can be changed before each individual stage.

Maps consist of roads, enemy spawns, and end-goals to protect. There are also spots for you to build four types of towers: Archers, Mages, Artillery, and Barracks. Barracks are different in that they stop enemies in their tracks, controlling their pace – a strategic tool that the game is sure to remind you of in an optional tutorial. The other three towers deal varying amounts of damage at different ranges. Each enemy coming down the line has a different type of damage resistance; thankfully, an in-game encyclopedia can refresh your memory.

Defeating enemies yields coins, which can be spent on towers, upgrades, and specializations. There are eight special tower classes to unlock, each of which can be extremely useful when placed strategically. For example, Archers can become rapid-fire Forest Rangers for high-traffic areas or Musketeer sharpshooters who pick off stragglers near the end-goal. Placing towers just so is half the battle in later stages and requires a lot of strategic forethought- especially when enemies can surprise you by paving new, unexpected paths!

There is barely a dull moment; between placing and upgrading towers, you’ll also be summoning extra soldiers to slow down enemies – and meteors to smite them. Both of these abilities have a cooldown and keep the pacing upbeat even in long levels. Plus, after unlocking Heroes, you’ll be moving a powerful soldier around the field to deal with especially pesky baddies.

When there is the odd second to breathe, you’ll be able to appreciate the maps, which are filled with tiny animated and interactive features. Meantime, the music can feel repetitive after a long go at a hard level – and the little voiced reactions from soldiers can also get old quickly.

Navigating this game is a snap using touch controls, which is to be expected since Kingdom Rush was originally designed for mobile play. However, using the Joy-Cons isn’t as much of a downside as one might think. Although scrolling around with the joysticks will slow down your reaction time in tense situations, it’s easy to pick up. Aiming meteors, reinforcements, Heroes, and barracks soldiers is fairly precise using this method, as well.

After each level, you’ll earn up to three stars, which can be spent on permanent upgrades to your towers and cooldown abilities. These upgrades, which can increase damage or cut costs, are easy to re-allocate at any time. It’s perfect for players who like to try out new strategies in each level.

Much like sequel Kingdom Rush Frontiers which hit the Switch earlier this year, Kingdom Rush is almost exactly like the mobile game. That’s not a bad thing – quite the contrary. Ever since it originally released, this series has been my go-to tablet zen game. Tower defence veterans and newcomers alike will certainly not be disappointed with this addition to their Switch library.

Mobile hit Kingdom Rush is right at home on the Switch, with art that pops on all screen sizes, and smooth Joy-Con and touch controls. Though simple in formula, levels have a steep challenge, multiple difficulties, and excellent pacing.