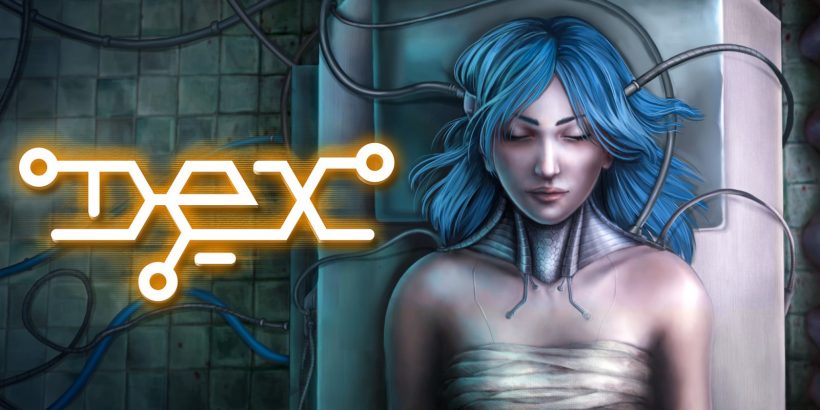 If not for the cumbersome combat and tiresome tech trials, DEX would have been a highlight of 2020.

Set in an open-world dystopia known as Harbor Prime, you take control of Dex: a blue-haired mystery who has abilities that a massive organisation is seemingly threatened by. Through 2D side-scrolling platforming, RPG tropes and a detailed, non-linear plot, DEX delivers a gameplay experience that is as unique as the world it is set in.

You kick off proceedings by running from your apartment as the organisation close in. What transpires from then on is entirely up to you. Form an allegiance with a Police Officer that you save from the slums, or suggest to a friend in need that they steal important parts for their mother’s operation, only to dob him in later on. The element of choice is initially intimidating, yet through extremely well-executed voice acting and an interweaving plot, it soon becomes the crowning glory of this title.

A story told is only ever as good as the imagination it captures, and fortunately, the rather beautiful locations that accompany the storytelling are the perfect complement. Whilst dystopian tales are becoming more common and therefore less bold in their design, there is something special here that I wanted to spend as much time as possible uncovering. Dialogue trees dictate how much you uncover, and the execution is on point here too. It felt organic, fresh and free from the usual limitations that one often expects.

It wouldn’t be a role-playing game without XP, an inventory and a map, and, once again, DEX ensures that all of the associated mechanics are put to good use. Skill points are obtained once the required XP has been gathered, and deciding how and when to use them is pivotal to your success in the game. It also dictates how you approach missions, as your preferred playstyle may not be possible without certain perks. It is satisfying to develop Dex into your very own cybernetic creation and the depth of detail means that you can really feel the weight of every decision you make.

In stark contrast to all else, the combat is simplistic and underwhelming. The change from melee to guns is a positive one when it occurs partway through the game, however, there is an underlying feeling that it could and should have been better. It can also prove to be frustrating too. Not nearly as frustrating as a trip to Cyberspace though.

At regular intervals throughout the game, you will be tasked with hacking into computer mainframes to steal information and disable security systems. During this time, you take control of a twin-stick shooting device that has to fend off viruses by shooting using ZR and ZL. It is infuriating. Disrupting the rhythm and flow of the engaging plot, it feels like a tacky add-on that the game could have done without. It is also quite challenging, and on many an occasion I had to restart, take some pills to improve Dex’s focus, and go again…and again.

If only. Those two words offer the perfect summary of DEX. The detail with which the development team have approached many areas of this game is commendable, and the world is one I could spend countless hours taking in. It is all the more disappointing, then, to find that some centrifugal areas are lacking somewhat. DEX comes recommended, but not nearly as much as it should have.

DEX delights and disappoints in ways that it feels only DEX can. The neo-noir, dystopian open world grabs your attention from the get-go, yet its grip loosens as the marvellous makes way for the mundane. What a shame.