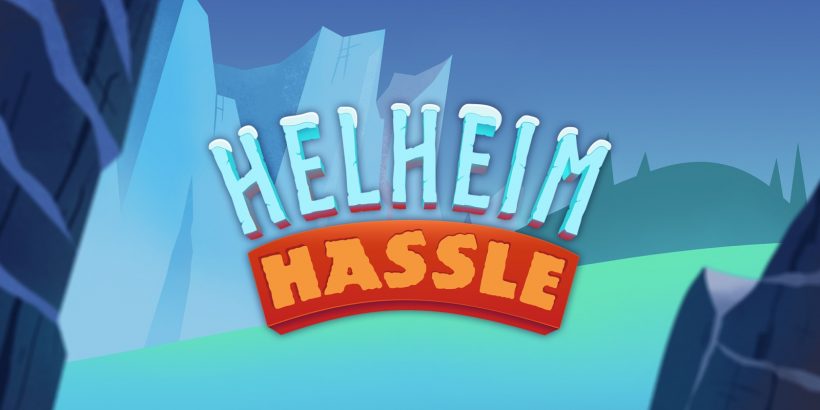 Development team Perfectly Paranormal is carving out quite an unusual niche for itself: limb-controlling games. Helheim Hassle has a lot in common with their first title, Manual Samuel, but it’s the twist on the main mechanic that stands out.

Helheim Hassle is a 2d platform adventure with a bright, cartoony exterior. The story is told with a shovel-load of humour which is rammed down the player’s throat right from the start, so it’s just as well that said humour is genuinely funny — there are certainly echoes here of other games that have won widespread praise for their comedic angle, such as the Monkey Island series of point-and-click adventures. When humour fails in a video game, it can be excruciating, but the developers have avoided this trap for the most part.

The main character, Bjørn, might control a bit strangely at first — with a really floaty jump, his arms flailing about — but this is explained, after a brief amount of gameplay, when his head pops clean off. There’s a ‘viking exploring the afterlife’ plotline which provides the exposition, but it’s the effect on the gameplay where the idea really shines: you’re suddenly placed in control of a decapitated body and a disembodied head, independently.

As you progress through the game, more limbs (well, legs and arms, anyway) become ‘detachable’ through minor mishaps and interactions with a host of amusing characters. A series of puzzles, meticulously crafted around this mechanic, are presented for the player to solve. These depend on various properties of each body part, and how they cooperate, separately or conjoined. For example, your head can’t jump particularly high, but it can roll around and reach certain parts of the landscape that larger body parts simply cannot.

It’s when you start combining limbs that the challenge really gets interesting. Stick an arm on a leg, and you’ve got a pretty effective team: they can climb, pick things up, and jump quite high. But without a head, you can forget about actually talking to anyone else.

The possibilities are huge, as evidenced by the codex which documents all the various combinations you create, and it’s this simple fact that allows for so many exquisitely-designed puzzles. Each limb, and every bizarre concoction you can come up with, behaves differently enough to set up all manner of entertaining obstacles.

The overall package is impressively constructed. From the writing, to the humour, the beautiful illustrations, and the excellent voice acting, Helheim Hassle shines with professional touches — the only small exception being a few typos in the dialogue here and there.

Unfortunately, there’s a minor flaw here: it turns out that controlling six separate limbs — and Frankenstein mash-ups of them — is not a walk in the park. Switching between body parts, combining them in the desired manner, and even recognising which you’re actually in control of, becomes almost as much of an effort as the actual task you’re supposed to be working on. Few games provide a single-button control quite as risky as one that pulls off your head and throws it in front of you.

Apart from a frustrating chase sequence or two, however, the game wisely builds its challenge around thought-out, leisurely puzzles. These make the most of the inventive central concept, whilst the amusing narrative and easy-on-the-eye graphics tie everything together into a highly pleasing aggregation. Unlike Bjørn himself, Helheim Hassle is a perfectly solid body of work.

Fall head over heels with Helheim Hassle, a game about putting your best foot forward, that won’t cost you an arm and a leg. If you like entertaining puzzle games, don’t sit on your hands, get to that eShop!