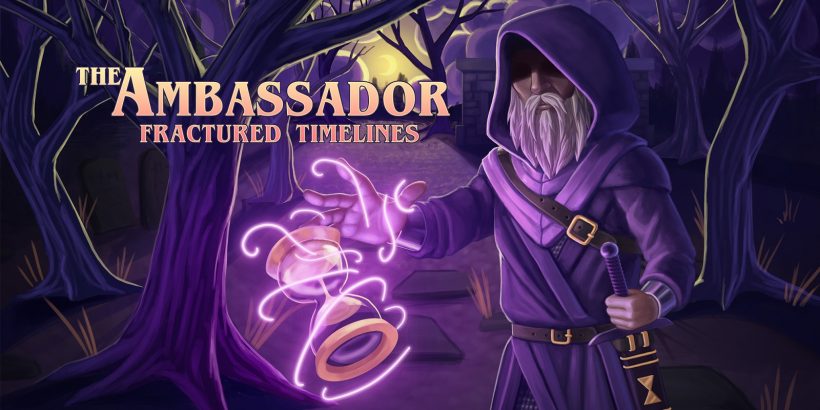 Imbuing you with magical powers and bestowing upon you a wealth of weird and wonderful weapons and garbs, The Ambassador: Fractured Timelines is a medieval twin-stick shooter game that puts you in control of Gregor; a newly recruited wizard that’s just had more than he bargained for thrust upon his shoulders. With the capital city of ‘Tamaris’ destroyed, it’s up to you to use your time-stopping powers and weapons to travel across three different areas, defeating a wide array of monsters and getting to the bottom of this world-ending mystery. Will you succeed? Only time will tell.

As with any twin-stick shooter, enemies will attack thick and fast from all angles in The Ambassador, and so as well as learning to master the ‘time-slowing’ technique that allows you to quickly evade danger in a pinch, you’ll have to carefully select your favourite loadout. Your primary weapon, secondary weapon, and clothing will determine whether you want greater mobility, ducking and diving between oncoming attacks and projectiles, or greater protection and damage output, getting the job done faster at the expense of taking a hit or two along the way.

My personal favourite combination was the ‘eldarmage robes’, the portal sword, and the crossbow, although later on the in the game I had to strategically swap out weapons and even robes mid-battle to utilise the benefits on-the-fly. With a couple of exceptions, most weapons have different pros and cons, and so you’ll find yourself going back to old favourites rather than ‘upgrading’ and never looking back. This RPG-element adds a great puzzle dynamic, as you take a look at each stage and analyse the best course of action (particularly when you’re going for no damage runs or faster times).

Controls in the game are smooth and responsive, which is crucial in a game like this, and the presentation is also pleasant – the crisp pixel art visuals do a great job of not distracting from the hectic on-screen gameplay, and the stellar soundtrack from Tony Manfredonia is a joy to listen to when slaying monsters.

After finishing the gruelling final boss, my aching trigger finger, cramped hands and sweaty palms collectively decided that my quest would end there for the time being. However, those that yearn for an even more dangerous adventure will be glad to know that there’s a ton of post-game content to dive into, and a range of tough-as-nails challenges. There’s an achievement system which rewards you with medals for beating certain bosses or pulling off feats with certain weapons, as well as time-trials for each level that test your wits by forcing you to rush into oncoming enemy fire. There’s even a challenge where you’ll have to make sure you destroy every crate and barrel in a level.

Finally, there’s an endless horde mode called ‘Bloodhenge’, where you’ll rack up points to buy upgraded weapons and open doors in a sort of Call of Duty Zombies-esque fashion. The replay value in this mode alone is great, and for those such as myself that are done with the campaign after one playthrough, it provides an arcadey excuse to keep the game installed for quick jump-in jump-out sessions.

Overall, clunky name aside, The Ambassador: Fractured Timelines is yet another satisfying and highly-polished Switch title to release this year from publisher Quantum Astrophysicists Guild. Fans of the twin-stick shooter should find something refreshing and different in this one, and those interested in the medieval, time-bending premise should give it a closer look.

With some brilliant sprite art and an engulfing soundtrack, The Ambassador: Fractured Timelines is a lovely medieval romp. The gameplay is satisfying, the variation of weapons and armour adds strategy to the frantic gameplay, and the built-in achievements and additional challenges add plenty of replay value.