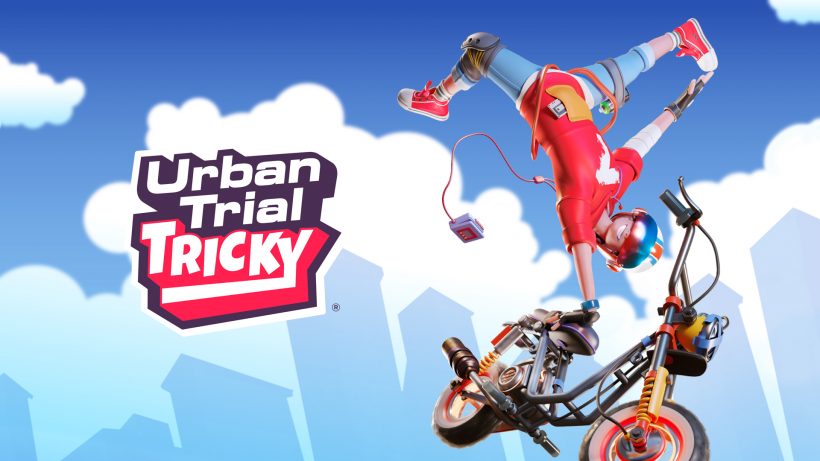 I don’t know when developers collectively decided that any game where you must make your way from one side of the screen to the other on a motorcycle must have the world “Trials” in it, but that’s just where we are in 2020. Ubisoft’s take on these fault-based driving games is, of course, the most well-known. However, you never need to look far on the Nintendo Switch eShop to find a suite of carbon copy alternatives. The aptly named Urban Trial Tricky luckily isn’t one of those, boasting just enough personality and customisation to make defying gravity on a bike fun for endless hours.

From the outset, it all seems familiar. The first couple of stages act as basic tutorial levels, where you’re given the time to get used to Urban Trial Tricky’s specific control set-up without any pressure to achieve a high score or quickest time. Before you know it, you’re zooming through various hazard-filled locations while pulling off the coolest feasible tricks, racking up as many points as possible by maintaining a decent score multiplier and trying not to crash. Acceleration is done by holding down ZR, with jump, turn, and trick manoeuvres mapped to the face buttons.

What helps Urban Trial Tricky stand out from the sea of other games in this genre, however, is its emphasis on performing unique tricks, and a vast amount of customisation options. You see, stages are separated into one of three types: Timed, Competition and Tricks. Timed is the most traditional mode, where you must finish stages in the lowest possible time – they rarely last longer than 30 seconds. Competition and Tricks, meanwhile, are a lot more free form. The former tasks you with completing a set number of tricks in a specific order within the time limit, while Tricks lets you off the leash to perform your own creations and purely involves chasing scores.

At first, achieving a 5-star rating was incredibly tough, with most of my early runs ranking well below the required score rating despite my best efforts. Eventually, though, Urban Trial Tricky reveals more complex button combos that lead to harder tricks, all of which are perfectly primed to help you reach the 100,000s and above providing you can land them successfully. It’s not uncommon for games like this to have a steep learning curve, but the benefit of this is that when you return to old stages to scoop up better ratings, it almost becomes second nature.

In addition to stars, every stage has a selection of challenges that will you grant you cash if completed. Sometimes this means gathering up all the collectables, racking up points using one particular trick and so on. From here you can visit the in-game store (no micro-transactions, don’t worry) to buy different costumes, bikes, and smoke. Smoke? I hear you ask. It might seem weird, but it was mere hours before I was riding a glowing orange bike dressed as a banana, leaving a trail of balloons shooting out from my exhaust. Crazy customisation like this makes all the growing pains worth it.

Urban Trial Tricky might not outright reinvent the fault-based racing formula, but by focusing on elements outside of the simple finish time, it offers up a fun spin on what it means to wrangle a bike across obstacles. Pulling off tricks can be genuinely challenging, and while you’ll likely blast through stages relatively quickly, there’s always a reason to replay them in the hopes of getting a better rating. Plus, running at 60 fps is a nice bonus.

Urban Trial Tricky is a fun take on a format Ubisoft successfully popularised some time ago. It’s suite of different unlocks and customisation options makes it a wild ride well worth taking, even if you’ll blow through stages relatively quickly.