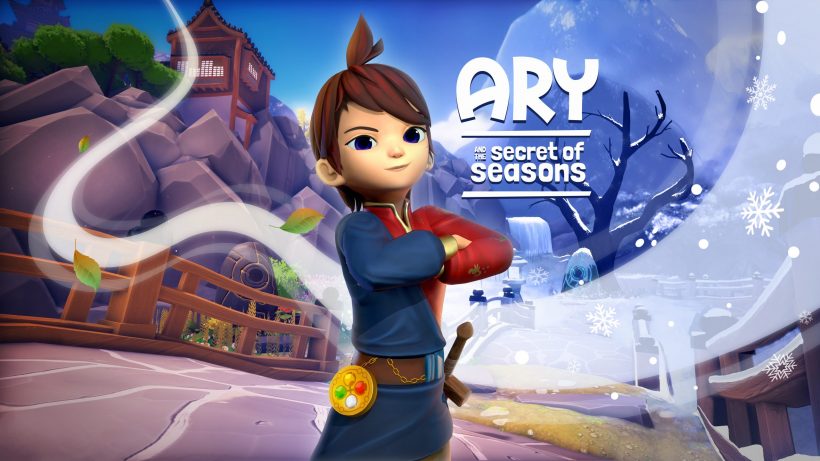 A game that keeps its innocence throughout, Ary and the Secret of Seasons is an adventure game that follows the story of Ary – otherwise known as Aryelle: a young girl on a mission to find her lost brother, Flynn, and in doing so, heal her father’s broken heart. Ary’s father is known as the Guardian of Winter, but with him being unable to perform his duties, Ary steps up to do them for him as the new Guardian of Winter. She cuts her hair, dresses in her brother’s clothes and picks up his weapon. She’s ready to begin her adventure and save Valdi.

Upon starting the game, you’re greeted with the pleasant sight of Ary playing with her toys, acting out a historical scenario of a legendary hero destroying an evil being. The Guardians of Seasons are put into place to protect this magical world, and here a young, innocent girl retells their stories in miniature form, unbeknownst to her the adventure she is about to embark upon herself.

Whilst running an errand for her mother, Ary is attacked by some very human-like hyenas, and this is where you first experience combat in Ary; a fluid and simple system using basic button combinations to attack, dodge and parry your enemies. The majority of enemies you come across will be easy to defeat, but you will come across the odd few that pose a challenge. Boss fights can be quite tough; it’s just all about learning their attack patterns and striking when you can.

Ary will come across various vendors scattered across the world that provide upgrades and items that are vital for succesfully progressing through the game. These come in the form of health items, increased attack power, cosmetic items, and much more. Make sure you look out for hidden chests dotted throughout to collect as many coins as possible in order to make full use of the vendors when you come across them.

Where Ary and the Secret of Seasons really excels is through its unique gameplay mechanic of using the seasons to your advantage, and for simple yet effective storytelling. A button press will allow Ary to use her special ability, which is usually needed to solve a puzzle and progress. Need to cross a lake? No problem, freeze it. It may uncover hidden ledges or icicles that were previously melted, which you can now jump onto. As for the story, it’s not mind-blowing, no. But the game’s enjoyable characters and solid cutscenes do a good enough job of keeping you interested, and that’s okay by me.

There are a few areas within Ary and the Secret of Seasons that I felt were lacking though – for one, the game’s mini-map. I found it incredibly difficult to read, and therefore struggled to find my way to my next objective a lot of the time, which became frustrating. It doesn’t really show a path; more like a blurred pixelated image of the area which could’ve been a lot clearer. Not only that, but the performance on Switch also suffers compared to other consoles. The framerate drops more than I’d like during dungeons, the visuals take a big hit, and loading times are also a significant problem, meaning that as much as I enjoyed Ary and the Secret of Seasons, I feel the £34.99 asking price is a little too steep for the experience on offer.

Ary and the Secret of Seasons offers players some unique gameplay mechanics and a story that doesn’t get boring, but sadly the numerous bugs and framerate issues don’t justify the £34.99 price point.