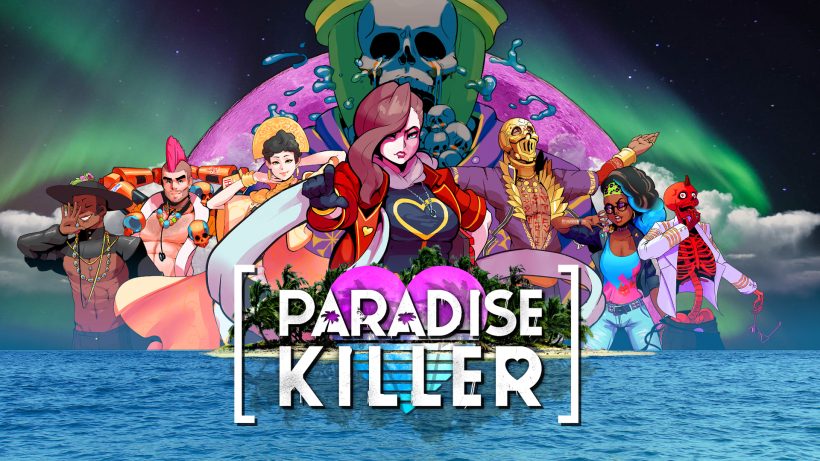 Paradise is meant to be a utopian refuge from the horrors of the world. On Island 24, things have taken a turn for the worse, and now attention moves towards “Perfect 25,” a new Paradise, a better Paradise – but before everyone can move on to islands new, a mass murder takes place.

Enter Lady Love Dies, the “investigation freak” who has been stuck in exile for the past three million days (that’s just over 8219 years, in case you were wondering,) for reasons that may or may not become clear. Lady’s expertise is required by the judge to find out who is responsible for the deaths of the entire Council, who are not only in charge of the islands but also the Syndicate.

Paradise Killer has elements that are reminiscent of other games, both in terms of mechanics and aesthetics, yet the collective whole has resulted in something rather unique. After having your task set from the Judge, you are free to explore the entire island at your own pace. Sure, Paradise (24) is ending, but it won’t do so until you feel you are ready to identify who is responsible for the Council’s demise.

To do so though, you need evidence, and that comes from exploration and asking leading questions from the non-council Syndicate members who are still alive (and haven’t already left for Perfect 25.) The answers they give can help support their alibi whilst also bringing doubt to someone else’s. Some of the seemingly random items you’ll find on the island can also bring up further lines of interrogation. Although you will be provided with plenty of answers and facts, that doesn’t mean you have a complete truth. It is up to you to determine a truth from all these elements.

You can decide how much exploration and interrogation is necessary before you initiate court proceedings. If you don’t have much evidence, it could be more difficult to pin the blame on your ideal suspect.

The game might end with the court sequence, but this is just an ideal way to bring closure. Although that closure is personal, as there is no right answer: you decide who you think is guilty, and the game trusts you to live with that decision.

The core game centers around unravelling more about the island, the previously failed islands, and the members of the Syndicate. This is done in any order you come across things, so each player’s experience will likely be quite different. This doesn’t require too much effort from the player, but the movement controls are far better than they should be for this kind of game, which prevents the various back-and-forth from becoming a problem.

It’s the presentation of Paradise Killer that ultimately makes it stand out as much as it does. At first, it might seem like it’s just using the vaporwave visual and audio aesthetic for the sake of it, but it is used wonderfully here. It’s just so damn cool! What’s more, the soundtrack is intoxicating, it’s like going down a Soundcloud rabbit-hole of unknown hidden gems.

The Switch is the perfect fit for this game; its style oozes from the TV screen, whilst also offering a chilled experience when playing handheld with some headphones on. See you on Paradise 25.

Paradise Killer is an exploration game like no other. There is a mystery to be solved, but you can spend ages soaking in the wonderful sights and sounds of the island. This one will stay with you for some time.