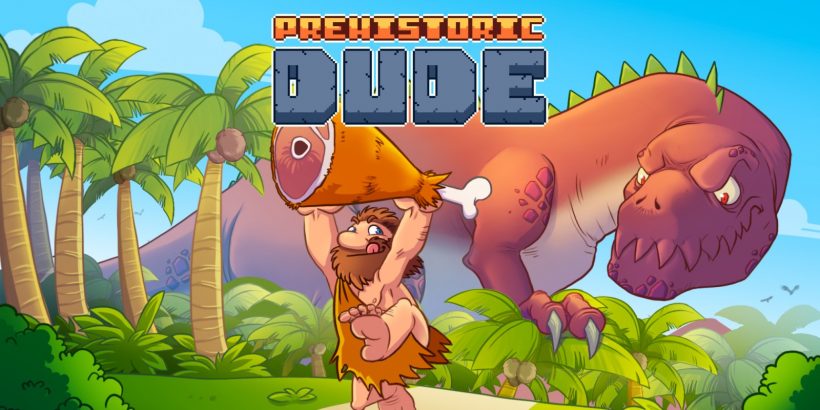 When I reviewed Juliano Lima’s previous title, Milo’s Quest, back in March, I noted that it bore many similarities to its predecessor — Super Box Land Demake. His latest, Prehistoric Dude, distinguishes itself by switching the genre from a top-down puzzler to a side-scrolling Metroidvania, but many elements are retained, for better and worse.

Let’s deal with the good first — unfortunately, it won’t take long. The distinctive graphical style remains; it’s bright, colourful, and every bit as appealing as those other titles, in all its pixelated glory. The game gets its plot — recovering your ham from a greedy dinosaur — out of the way quickly, dropping you right into the action which is nice and accessible. There’s also a welcome abundance of power-ups available to collect, given the small map.

The music is chirpy, catchy, and just about on the right side of annoying. And some of the ideas present, although not original in terms of this series, work as well as they have before: In particular, the variations in tasks to unlock certain rooms — collecting keys, destroying all enemies, activating all switches — give the player lots to do. At first.

But, sad to say, it gets too repetitive too early — and then the game’s over. Prehistoric Dude is billed as a ‘mini Metroidvania’, but even that’s an exaggeration. The game is all but done after 90 minutes, and that’s with plenty of exploration. That exploration isn’t particularly deep or challenging, either; this is a pretty linear game, which only serves to annoy when it diverts from the default path.

Combat is a letdown which abruptly moves from challenging to mundane once the melee weapon is obtained. But it’s also annoying at first due to the stamina system. It took me quite some time to realise that the stamina is tied into the club’s cooldown system, and the lack of any direct indication that the weapon is ready to use again can be incredibly frustrating. Early on, your only means of dispatching enemies is to fling axes at them, but these need to be collected as you go and they’re very limited. All the pacing seems slightly off.

There are annoying bugs too, and I’m not just talking about the bees and snails which threaten Dude’s existence. The ‘cling’ mechanism sometimes leaves you implausibly standing alongside a cliff, gravity having given up the ghost. Some enemies manage to just kill themselves (to be fair, that might actually be a design choice rather than an outright bug) as if even they can’t be bothered to take part.

And at the end, the final boss ramps the challenge right back up again, in a manner that is simultaneously welcome and infuriating. The dinosaur has a punishing attack pattern, but the screen shake that occurs every time it lands is so pronounced that it just seems unfair. At least you’ll have a good stock of axes which will have gone largely unused since collecting the club.

Any goodwill Prehistoric Dude succeeds in building early on, it manages to waste by failing to really develop the gameplay as things progress. It’s a game that is over almost as soon as the action’s begun, and maybe this is because there’s no real incentive to hang about. For a similar price, I’d refer gamers to the excellent Gato Roboto as an example of a mini-Metroidvania done much better.

Prehistoric Dude feels like it’s going through the motions. It’s too short, yet somehow manages to be repetitive, and the annoying combat and bugs will probably only encourage players to rush through the experience.