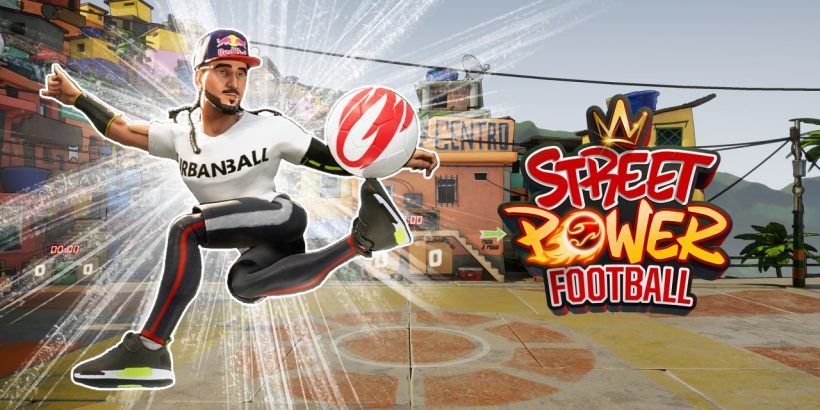 With the likes of NBA Playgrounds, WWE 2K Battlegrounds and the classic FIFA Street, arcade-like sports games have always been a big hit. Street Power Football – or Street Power Soccer if you’re in the US – is the latest instalment in the genre. Is it reminiscent of FIFA Street? Or is it a clear miss?

Living up to its name, Street Power Football is all about street football: a 3v3 match where performing tricks is just as important as scoring goals. Instead of featuring the professional footballers we’re used to seeing on our TVs each week, this game features icons of the street football world — some of them well known, some not. If I’m being honest, I had only heard of one name in this game and that was Liv Cooke.

There are a few different game modes to keep you busy in Street Power Football. ‘Become the King’ is the game’s adventure mode. In ‘Freestyle’ you’re free to perform whatever tricks you want, to a beat, but there’s a time limit and the person with the most points wins. ‘Trickshot’ mode involves hitting various targets spread around the playground. A ‘Street Power Match’ can be played 2v2 or 3v3, and you have 5 minutes to score 5 goals, whilst ‘Panna’ mode requires you to nutmeg your opponent. Finally, ‘Elimination’ is a 1v1 mode where players knock out a member of the opposing team each time they score.

‘Become the King’ is as close to a story as you’re going to get. You’re greeted by an enthusiastic Sean Garnier (Street Style World Champion), standing in front of a green screen, which honestly makes it feel very cheap. Add in the fact that it uses dubbed vocals, and it’s already not off to a great start; I would have preferred subtitles. He explains that you’re on a journey to become the best – or the King. To do this you must go through a series of ‘missions’ that require you to pretty much just play parts from the other game modes. Don’t enter this expecting any more story than that.

One of the selling points of Street Power Football is the ability to perform a plethora of tricks and, while this is true, there is no skill needed in order to perform them. Pressing the Y button will prompt your player to perform a random trick and that’s it. It would have been nice to use various stick and button combinations to perform different tricks. The fact that this isn’t an option makes the gameplay feel not only pretty boring but also unrealistic. There is no fluid motion when performing tricks either and when my player would be running with the ball, it would almost certainly ‘rubber-band’ back which quickly became frustrating.

Sadly, it doesn’t get any better when we look at the game’s graphics either. They’re very outdated to the point I felt like I was playing a much older game than one released in 2020, which is a shame. Animations are poor and it was almost impossible to pick out any details of both the characters and the environment itself. Everything sort of blends into each other. But hey, you can customise your player’s clothing…

Street Power Football didn’t provide me with any enjoyable moments at all, which is a shame because it had so much potential.

Street Power Football fails to deliver in pretty much every area. It’s let down by its poor graphics, poor gameplay and bugs, making the £39.99 price point almost laughable.