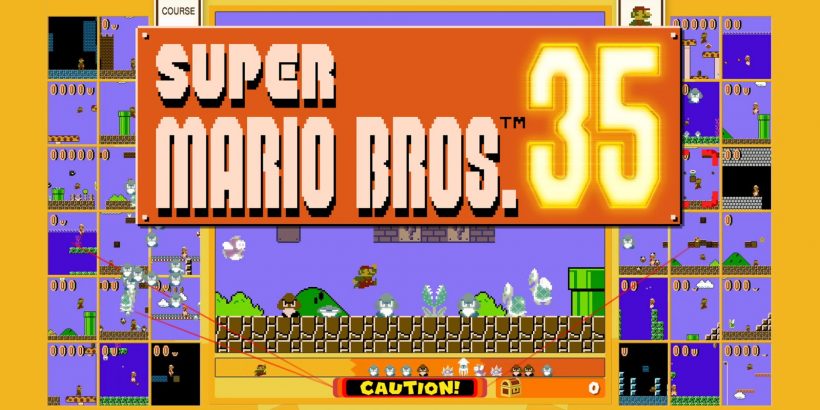 Well, it’s been 35 years since Super Mario first graced our screens, and what a 35 years they’ve been! We’ve had Mario in just about every iteration you could imagine, from racing driver to tennis player to squad-based shooter. You’d be forgiven for thinking that they’ve done all there is to do with Mario. But Nintendo (being Nintendo) dropped the announcement of a free-to-play Mario Bros. battle royale back at their surprise September Direct. Playable via NSO, it’s a daring concept that, thanks to simplistic, slick mechanics and faithfulness to the source content, has turned out to be a humble hit; who’d have thunk it!?

For those familiar with Tetris 99, the same developer — Arika — took on Super Mario Bros. 35, and the core concept remains. In Mario 35, you’re competing to outlive 34 other players in an endless run of Mario Bros. levels. Once you’re killed or run out of time, that’s it, buddy: you’re outta there. However, in order to spice things up, you can send enemies to your opponents by killing them within your own game; if you jump on a Goomba, you send that Goomba to someone else to deal with, for example. The idea is that you clog up your competitors’ screens with so many enemies that they make a mistake before you do. You’re also awarded extra time for defeating enemies, picking up power-ups, and reaching the end flag; things to be thinking about at all times, especially as the clock starts to speed up once you’re down to the last few remaining players.

The good news is, it plays like a dream. Though not strictly the same game as the original Mario Bros., it responds beautifully using either the d-pad or thumbstick controls, and you’ll feel right at home with the faithful, high definition environments and original music. Whether you decide to rush through levels or take your time with precise movement, the flow of play is superb. Should you pick up a Fire Flower or Super Star, you’ll feel like an absolute badman taking out hordes of enemies, racking up your timer and sending an army of undesirables stampeding into someone else’s game. It’s glorious.

While we’re on the topic, there are options for enemy distribution that add another layer of strategy to the proceedings. Using your right thumb-stick, you can select any one of four options depending on your gameplan: do you want to aim enemies at those with the most coins, those with the least time remaining, those who are attacking you, or just keep it entirely random? Coins allow players to spin a roulette wheel that awards them a random power-up. I like to take the high earners out first then, later in the game when the clock starts speeding up, I’ll switch to those with the lowest time remaining, to hopefully fluster them and force an error. The latter definitely seems like a common tactic, making it all the more important that you don’t start getting low on time yourself, or you’ll be on the nasty end of a lot of ouch-makers.

Mario 35 definitely peaks at its most chaotic. Water levels, difficult platforming levels, and of course Bowser’s castle all introduce new challenges and enemies to tackle and ultimately use to your advantage. Nothing prepares someone for the confusion they’ll feel when they first see a Bowser appear in front of them in the middle of the sea. Unfortunately, levels are introduced too slowly, and you’ll find yourself repeating early stages over and over, particularly as the level selection process isn’t explained. In fact, nothing in Super Mario Bros. 35 is explained, so there’s a lot of trial and error required.

It’s seriously addictive stuff for the first couple of days as you work towards that top spot, and you only need to look to the Twittersphere to see the effect it’s had on players, showing off their gold medals or lamenting over their second-place silvers. Admittedly, once you’ve got that win there is less of a desire to continue playing quite so ruthlessly. However, daily challenges, a rotating special battle with unique rules, and a coin ranking tournament — pitting you against other players that have already mastered the art of the win — are all there to keep you engaged.

Currently, Mario Bros. 35 only has a six-month shelf-life, disappearing March 31st — a crying shame and frankly a little bizarre. What we’ve got here is a really solid, completely unique game that’s demonstrated yet again Nintendo’s willingness to explore new avenues with sacred IP. It’s faithful enough to the original game to not upset the die-hards but modernises gameplay mechanics to feel smooth for new players. It will need new content to keep it fresh, but this party doesn’t need to stop. Let’s hope Nintendo rethink their strategy. Happy Birthday, Mario!

Slick mechanics, smooth controls, and faithfulness to the source material make Mario 35 another successful battle royale hybrid from Akira. Nintendo demonstrates yet again their willingness to experiment with sacred IP, and the result is something we’ve never seen before.