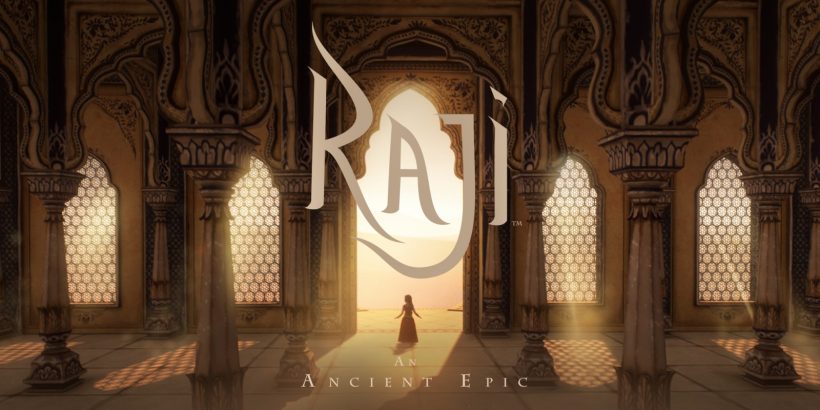 It isn’t often a release comes along which, though not mechanically changing the game, feels like nothing you’ve ever played before.

But that’s exactly the case with Raji: An Ancient Epic. Main character Raji is making her way across this rendition of mythological India to find her captured brother Golu. All the way, Hindu deity Vishnu and war goddess Durga pseudo-narrate the game and Raji’s quest as they watch down upon her, with Raji gifted the use of four different mystical weapons to help her cause. The first weapon is Durga’s Trishul, which is simply used to strike opponents from up close and personal. The bow follows, before a sword and shield and the most powerful weapon of all, which shall remain unspoiled, for the game’s very latter stages.

Everything about the game is intrinsically focused on Indian culture, starting with the heroine Raji and continuing to the settings, but also by way of interactable glyphs located all over the game world telling the stories of Indian gods and myths, a subject largely untold to a western audience at least in the guise of video games. What was particularly laudable was that this wasn’t culture for culture’s sake – Raji’s world is a tremendous, awe-inspiring locale for a video game and one which never feels out-of-place or shoehorned in. It’s excellently well done.

Part of the reason for that is just how good the visuals are. An Ancient Epic really is a looker, with crystal clear colours, excellent use of lighting and shadow, and some pretty impressive boss designs too. It’s one of the prettiest games on the Switch – there’s certainly no doubt about that. Unfortunately, there are a few too many repeated sound effects in the audio backing – a noise that sounds like a cooing monkey is heard far too frequently to achieve any sort of immersion, but that is a minor criticism in a game that otherwise is a superb presentation.

The general gameplay, however, isn’t perfect. The theme of the action is that Raji will follow a fairly linear path and along the way she’ll be fenced into a circle by invisible forces as enemies rain down upon her. The only way to move on will be to vanquish all of the enemies which appear within the circle, but there are some cool ways to dispatch of them: jump towards a pillar and you can kick off it to deliver a blow which harms all monsters within a certain radius of Raji. Deliver enough pain to an enemy and you’ll have the opportunity to deliver a finishing move which will heal Raji up as a result. You can get overawed at times, though, with several enemy shots hitting you before you’re physically able to do anything about it, so the control doesn’t feel quite where it should be. There’s certainly a tactical element to the fighting – trying to split the enemies up and then picking them off one by one, and deciding when to go for the finishing move in order to keep your health topped up – but thanks to a highly forgiving autosave system, you’ll never have to go back beyond the current battle when you die.

All things considered, even with some unfair controls-induced beatings, Raji is a must for your Switch collection. This is a fresh, new-feeling experience which tells a story I don’t think we’ve ever heard in video games. Everyone should be looking out for it.

Raji: An Ancient Epic is a beautiful adventure unlike anything we’ve likely seen in video games, let alone the Switch. The gameplay itself is of a strong if unspectacular standard, but it’s the design and the experience which you’re paying for here.