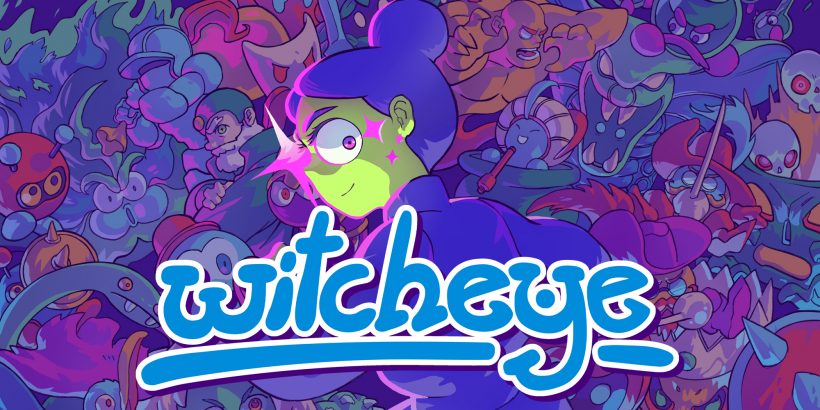 Before booting up Witcheye, I was a little concerned. A portion of the eShop leans on 16-bit retro-aesthetic to shift units through nostalgia; however, the witchcraft on display here from Moon Kid makes Witcheye more than the sum of its parts. With Devolver Digital as publisher, boasting a back catalogue of titles such as Enter the Gungeon, I should have had more faith in what was on offer.

A knight breaks into a witch’s hovel and steals her valuable witchy items. Sound familiar? It should. But stifle that exasperated sigh! Witcheye flips this tired convention on its head, reframing this menial fetch quest and putting you in the pointed shoes of the green-skinned hag. As she turns herself into an all-seeing eye of vengeance, you’re tasked with hunting down this would-be hero through a series of 2D environments.

The clumsy thief fumbles his winnings as he goes, leaving a trail of gems and spell ingredients in his wake. It’s your job to reclaim your goods by traversing a hostile environment filled with all manner of nasty creatures. Movement itself is a welcome reinvention, delivering what might be the first 2D platformer to not feature jumping. As the floating eye, you are in perpetual motion, able to change direction with a flick of the analogue stick or a swipe of the screen. You can also hold position by pressing any of the Switch’s buttons or tapping the touchscreen, allowing the eye to suspend itself in the air to line up a shot or avoid incoming projectiles. The added dimension of continuous movement increases the challenge of Witcheye. Despite being able to hold position at any time, in the heat of the moment this can quite easily be forgotten. Just like the diverse boss fights at the end of each world, this game is easy to figure out but difficult to master.

Despite modern design features, the game uses inspiration from the past to pay homage to the titles that came before it. The first enemies you encounter strike an uncanny resemblance to Dizzy Egg, and the level opening graphics are incredibly Sonic-esque.  The chiptune inspired soundtrack ties up the overall aesthetic, managing to feel fresh, despite being clichéd. The attention to detail within this seemingly simple retro-inspired platformer is something to be commended: enemy types are varied but the intricacies of fighting each one are tight and easily digested; underwater sound effects are perfectly muffled, and the level design – though simple – is perfectly balanced to allow you to make the most of the momentum you gather.

Witcheye’s strongest asset is how challenging it is; defeated enemies drop gems, but reach them too slowly and they’ll disappear. With a level end screen recapping what you’ve missed, those aiming for 100% can expect several re-runs, which is one of the only downsides to this title. Witcheye suffers from the same stage fatigue that many world-based 2D platformers do. As you move from Level 2-3 to Level 2-6, this sameness can become a bit of a bore.

With the ability to rush each level without stopping to reclaim any of your lost items, Witcheye is a game that balances the needs of the hardcore completionist and the simply curious. With its retro-charm undoubtedly pulling in an audience who expect a specific experience, I’m happy to report Witcheye delivers all of that and more, providing a unique 16-bit platformer.

Witcheye is a game that feels incredibly familiar yet fresh at the same time. The reinvention of movement, the attention to detail, and the clever role reversal make this 2D retro platformer so good; it’s witchcraft.