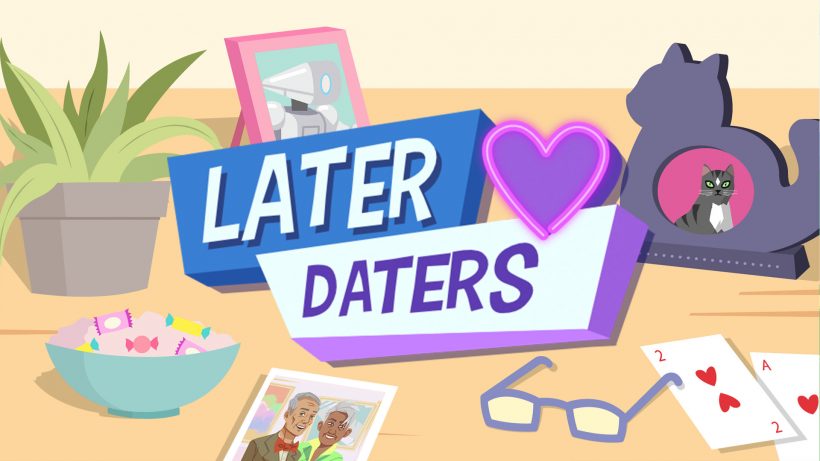 Sunset is a beautiful time of day! This metaphor hits the nail directly on the head in Later Daters. In this lifestyle role-playing game, slip into the slippers of a spunky octogenarian moving into the retirement community of Ye OLDE (Ocean Living Domicile for the Elderly). Here, the acronyms run rampant, as do the libidos, rawr!

Later Daters originally released on April 16th of 2020 from Bloom Digital: a Canadian independent game company that prides themselves on creating “…narrative driven games featuring authentic characters in the midst of pivotal moments and life-changing stories.”

On October 29th, Later Daters Part Two released, and features chapters four through seven of the hijinks at Ye OLDE. This allows players to continue their groovy golden-ager’s previous journey, or you can start anew and try something different! The Later Daters Switch Bundle is all of the chapters, as well as the bonus cribbage mini-game in one neat little portable package!

The game is a visual novel, so players will mainly be reading through the story, and making choices about how to respond to various scenarios and situations.

The game has a lovely, unique art style that is both simple and endearing; full of pastel colours and thick lines that are easy on the eyes, the art makes each character and background really pop! The residents at Ye OLDE have their own rich histories, which makes the game very replayable as you get to know the individual seniors and find out what makes them tick.

There is also an amazing amount of diversity and representation in this game that makes me proud of its Canadian creators! Not only do the characters come from every walk of life – from First Nations to Caribbean to Middle-Eastern and beyond – but the game is LGBTQ+ representative as well, there are no boundaries or biases keeping you from your chosen love interest. On top of that, the player can choose their own happiness: form a sexy monogamous relationship, dive a bit deeper and try out some polyamory, or throw caution to the wind and decide that you’re perfectly happy with yourself and simply make some very good friends.

Right from the get-go you can choose to be a Mr, Ms, or Mx, as well as several options with regards to your backstory: did you spend your life dedicated to your career? Or did you recently lose your beloved spouse? There are no wrong answers in Later Daters.

In our world today there is so much pressure to find a partner/house/family and have your life all figured out as soon as possible; Later Daters breaks the conventional mould by saying that whatever path you follow in life is okay, and will be just as rich and memorable as any other path.

The background music is quaint, and totally sets the mood. It isn’t on a loop however, so there were times when I would be playing in silence for a bit because the track had ran its course. One of the residents at Ye OLDE is a vintage rock star, and every so often he will be playing the piano and singing; all of his songs are actually sung in the background behind the words, in fact he even has his own music video! Be still my beating heart! No really… I could die!

Bloom Digital achieved what they set out to do; Later Daters is a compelling story, with well written characters, and the option to choose whatever kind of companionship you desire. Part Two adds a whole lot of zany fun, sexual innuendo, and steamy smooching, as well as delving into some deeper discussions about topics that are likely never far from the forefront of a life in the golden years.

The price given includes the base game and the DLC which, on the UK eShop, are sold separately.

Fall in love again or for the first time, make some new friends or don’t, in Later Daters. A fresh perspective on a genre dominated by a more youthful perspective. If visual novels are your cup of tea, and you want a new experience within the genre, then pick this one up.