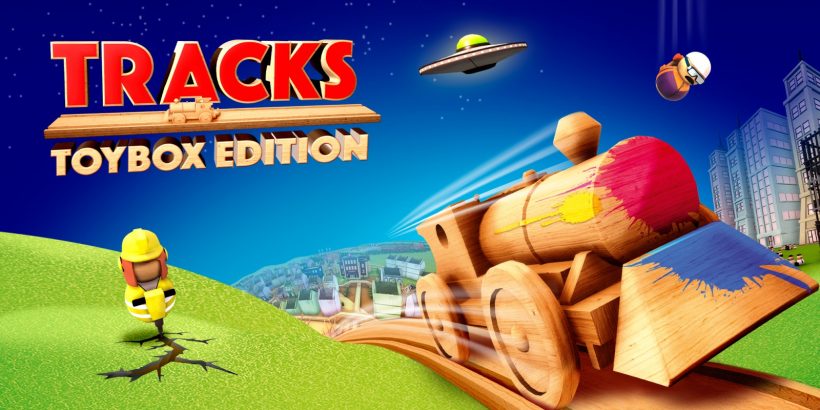 Could this be the train set that you have always wanted? Tracks – Toybox Edition eschews the need for a big box full of wooden trains, track pieces and buildings, and squeezes it all into your Nintendo Switch instead.

It all begins with a blank canvas on which to create your vision. There is a very limited selection of environments to choose from, including a Modern Apartment, a Bedroom or – here comes a curveball – the Moon, and from there a click of the R button presents a list of pieces to play with, including buildings, trees, vehicles, and signs. There are two different play modes: Free Play, in which you can create to your heart’s content with no specific objectives, or Passengers mode, which adds a little spice by asking you to create a track that links a platform of waiting passengers to a station elsewhere in the play area.

The core concepts are in place, but things start to derail after spending merely a couple of minutes with Tracks – Toybox Edition. The first obvious omission is the complete lack of touchscreen functionality. As we’ve learned from crafting masterpieces in Super Mario Maker 2, placing content with a stab of your finger is intuitive and efficient, and it seems counter-productive to not offer the option here. It can be laborious to be creative when your ideas are accelerating away faster than you can actually execute them.

Worse still, manipulation of the camera feels far more awkward than it should be, as if you’ve taken a step back in time to the early days of 3D gaming. Wrestling with the camera as you attempt to position an object is not an enjoyable experience.

To add to the confusion, when placing buildings in your chosen room environment, the game allows you to position an object in such a way that half of it is absorbed into the furniture with the other half sticking out like some kind of abstract piece of art. If you have ever wanted to merge a Pet Shop with a TV unit, this is your golden ticket. More oddness: tracks can be placed mid-air, floating without support, like a rigid wooden snake defying the laws of gravity.

You can exit the creative mode at any time and test the track you’ve created. The ideal viewpoint is from the driver’s seat, with a push of the left thumbstick to increase the speed of your train. If you have managed to enter a zen-like state and concoct an impressive town layout, it’s a pleasant diversion to then explore it from the perspective of your train; a little reward for your hard work – and constructing a map does feel a little too much like work.

To appeal to players that are not avid train fans, the game needs far more polish. The camera angles and the menu system should both be more user-friendly; even saving is a chore. There is no autosave, and loading a new track that you have created previously is a nightmarish test of menu navigation. If you are playing in a particular environment (the Bedroom, for example) and you want to play a track that you have previously created in a different location (such as the Modern Studio) you have to load the relevant blank location template before loading your track. It feels like an unnecessary obstacle for the player.

If you have the patience of a saint and enough interest in the subject matter, Tracks – Toy Box Edition may not be a complete train wreck for you. For anyone else, the game lacks dynamism and accessibility. It’s a disappointing ride that feels like it should have made a few stops at Quality Control before allowing passengers.

There are flaws under the hood that hinder Tracks – Toy Box Edition from fulfilling its aim. The user interface feels counter-productive, especially with a lack of touchscreen compatibility. Patience may prove fruitful, but overall, it’s not the smoothest ride.