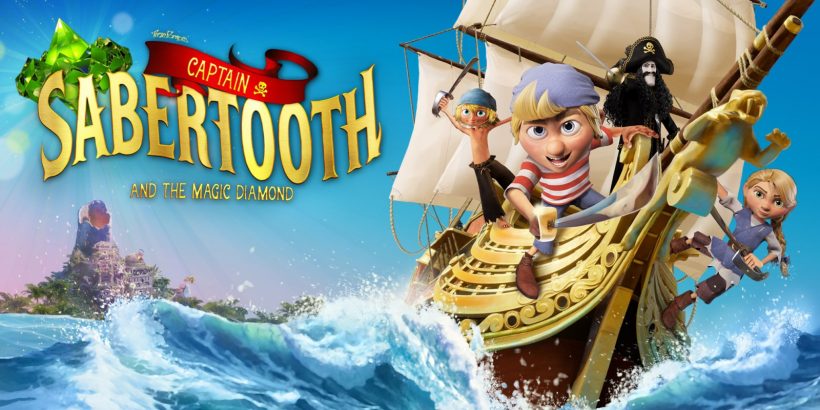 Captain Sabertooth is a multi-faceted franchise, incredibly popular with young children. In Norway.

If you’re unaware of the phenomenon, think of the Aardman Pirates! animated feature, the Pirates of the Caribbean film series, or even LucasArts’ Monkey Island games, any of which might have served as inspiration. Just don’t expect anything quite up to any of those kinds of standards.

Playing as an apprentice pirate (male or female, take your pick), you’re tasked with locating the titular diamond that grants its bearer any wish they desire. Along the way, you’ll gather all kinds of treasure, and amuse yourself with all manner of piratical antics such as, er, digging for more treasure. Really, it’s just all about treasure. And pinball, for some reason.

Captain Sabertooth is a 2.5D platformer, with Metroidvania elements, and a smattering of mini-games. Whilst we’re clearly not in Donkey Kong Country: Tropical Freeze territory, the overall look and initial impression is strong: locations are colourful and attractive, without obscuring vital platforming elements. And a smattering of puzzling elements helps to keep the action fresh, beyond the simple challenge of working out where to go next.

There’s a good use of environmental hints (basically, lots of arrows) to lead the way, and although even some of the early combat can be mildly challenging, almost every vanquished foe produces a hearty health refill. The first mini-game, involving canon firing, is easy to a fault: it gets tiresome about halfway through, by which point you’ll easily have achieved the score needed to progress.

At least the gameplay elements are reasonably varied. Through a series of environments, you’ll encounter many classic platforming tropes, including moving platforms, wall-jump challenges, and enemies that can be dealt with either via melee or ranged attack. The game doesn’t want for lack of ability upgrades, either: the wall jump is joined by improvements to the main sword attack, a rope-swinging mechanic, and some nifty diving gear. Actually, the swimming sections offer some of the nicest underwater action in the platforming genre, in terms of how the character controls, at least.

But Captain Sabertooth is a curious package. Despite its strengths, there are too many flaws that will alienate and frustrate huge chunks of the potential audience. Anyone much over the age of about six years will either be mildly irritated, or wound up to the point of distraction, by the agonising voiceovers and repetitive dialogue. The parrot’s screechy voice, in particular, is practically unbearable. And the first half of the game is almost insultingly easy for all but the youngest of players.

Those young players, however, may be put off by some of the combat. Killing animals is not a rare thing in gaming, but the sheer number and variety of innocent creatures that the player is called on to dispatch here could be unsettling. And the incessant dialogue (“Take that you miserable creature!”) simply adds to that unsavoury feeling.

Moreover, the game’s difficulty ramps up considerably, particularly near the end. Although experienced players should have no trouble finishing it over a weekend, some of the pixel-perfect jumps and underwater manoeuvring might prove all too difficult for the target audience.

In short, Captain Sabertooth is a better game than you might expect, but you’ll need to belong to an incredibly specific demographic in terms of age and ability to find this a worthy experience, particularly with the hefty price tag.

Captain Sabertooth and the Magic Diamond £31.39

Captain Sabertooth is, on one hand, a pleasantly surprising stab at a 2.5D platformer that fans of the series may enjoy. However, it has too many issues which will only serve to alienate young and old players alike.