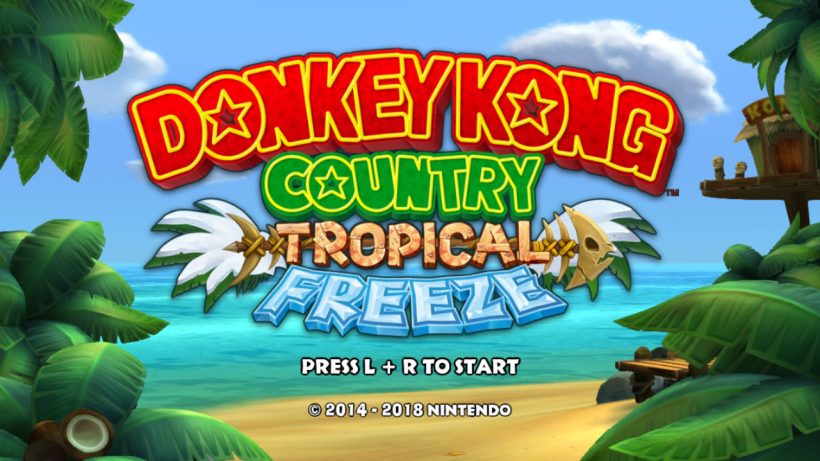 Go bananas on the go.

One of the main criticisms directed at Nintendo in recent years is that they tend to make their games a bit on the easy side. One could argue that their target audience has always been – and always will be – children, but for the millions of fans who have grown up alongside tent-pole franchises such as Mario and The Legend of Zelda, it’s safe to say that they’re after something a little bit more taxing. Enter Donkey Kong. Originally released on the Wii U back in 2014, Donkey Kong Country: Tropical Freeze continues Retro Studios’ streak of high quality games following their initial stint with the Metroid Prime series. Its release on the Switch is largely exactly the same experience as before, bananas ‘n’ all, but with a few significant additions and alterations that both newcomers and returning players will appreciate. But how does the experience hold up after four years? Let’s find out… 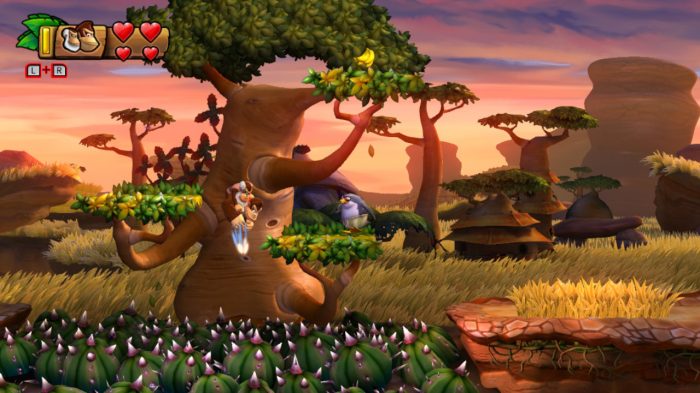 If somehow you didn’t play Tropical Freeze on the Wii U, or its predecessor Donkey Kong Country Returns on the Wii/3DS, you’ll be thrilled to know that it delivers practically everything you could possibly wish for in a side-scrolling platform title: bold visuals, sharp gameplay, varied levels, menacing bosses and a steep but fair difficulty curve. I’d go so far as to say that it’s one of the strongest platform titles in recent memory, easily beating out Nintendo’s own ‘New’ Super Mario Bros franchise and possibly even Ubisoft’s Rayman series – it’s that good. The level of sheer ingenuity remains intact with the Switch version – in fact, the ability to play the game on the go only further highlights just how fantastic it really is. Every single level is absolutely jam-packed full of secret collectibles and varied enemy design, it’s easy to appreciate the passion Retro Studios has put into the title.

It all kicks off during Donkey Kong’s birthday party, and just as our simian hero is about to blow out his birthday cake candle, a gust of wind extinguishes the flame and a snowflake floats into view. Before long, the entire island is buried beneath snow and ice – but what happened?! The opening cinematic does well to set up the general premise, but the story as a whole is largely insignificant. Additionally, considering the game’s subtitle and the threat of perpetual winter in the plot, you’d be forgiven for thinking that the entire game take’s place in snowy environments. Fear not, though – throughout Tropical Freeze you’ll be rolling across burning savannahs, plunging the depths of the sea and even traversing across some giant fruit. The variety throughout the game is seriously impressive and it never gets dull. 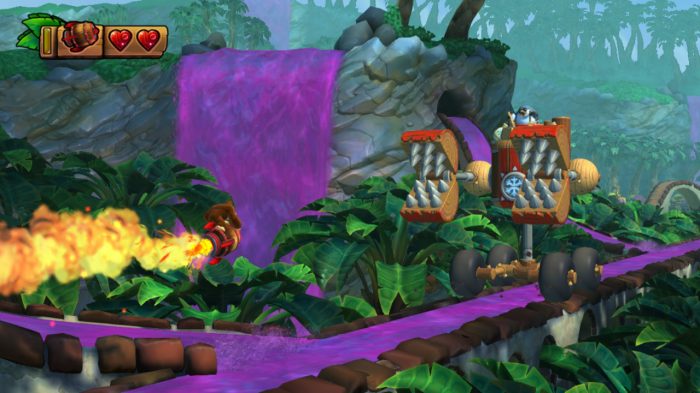 The gameplay remains pretty much exactly the same as its Wii U ancestor – DK can run, jump, climb and roll throughout the levels with grace, and you’ll often need to make use of his powerful arms to pound the ground in order to reveal secret passages and collectibles. You’ll also find barrels throughout the levels granting you access to one of DK’s faithful companions: Diddy Kong, Dixie Kong and Kranky Kong. Their abilities are unique to one another, offering distinct advantages depending on the situation at hand – Diddy Kong can use his rocket backpack to give DK’s jumps more distance, Dixie Kong spins her fabulous hair around to grant extra height to jumps, and Kranky Kong can just his walking stick as a pogo stick, allowing DK to bounce along the levels, dispatching enemies with ease and avoiding the danger of spikes and traps.

This doesn’t mean the game is easy, though – far from it. Even veteran gamers will find themselves cursing at some of the level’s devious designs. The boss battles, in particular, are especially tricky. Those of you used to Super Mario’s 3-hit boss battles will be in for a shock to the system here – every boss requires approximately ten hits to dispatch, and most will present themselves in three phases, each one more difficult than the last. Having said that, the game is ludicrously generous with lives – you’ll find coins scattered throughout each level, and by using these at Funky Kong’s shop, you can easily amass ninety-nine lives quite early on in the game. You’ll still die a heck of a lot, but I never found myself in danger of running out of lives. 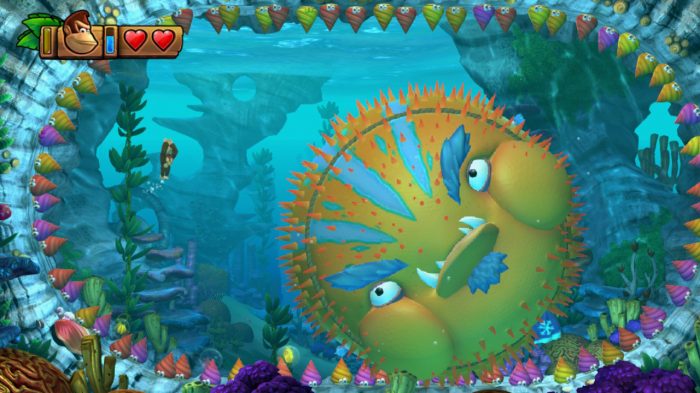 To counter the often harsh difficulty level, the Switch version of Tropical Freeze has introduced a new mode for newcomers: Funky Mode. This exclusively stars Funky Kong as its main character and makes the game a lot easier for the most part. You won’t be able to call on the assistance of DK’s family during levels, but Funky Kong has a generous five hearts at his disposal, as opposed to DK’s two hearts. He can also double jump and roll around indefinitely, meaning even the most casual of gamers can breeze through most levels at ease. I’d recommend everyone at least try this mode for the sheer joy of playing as Funky Kong, but veteran gamers will be best off sticking to the normal mode for the optimum Donkey Kong experience. 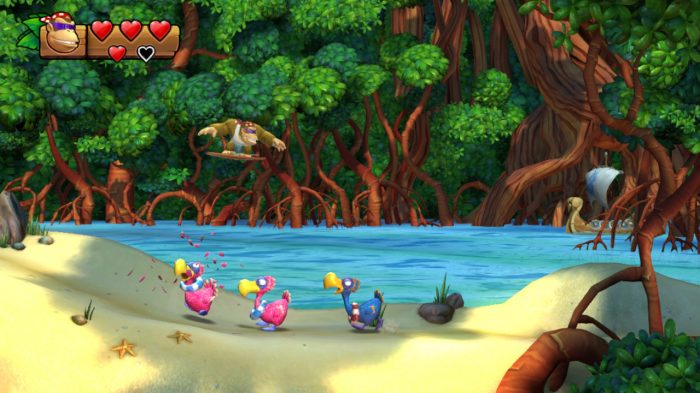 You’ll likely plough through the main game in as little as ten hours, but Retro Studios has been more than generous with its collectibles. Throughout every level, you can pick up four floating letters spelling out the word KONG, and there are also puzzle pieces hidden in more perplexing spots – collecting all of these and beating the world’s boss will unlock dioramas to view in the game’s menu. It’s a game that begs to be replayed, and best of all, you can also use collected coins to unlock figures based on characters and enemies featured in the game. These remind me a lot of the trophies in the Super Smash series, and you can browse them at your leisure to truly appreciate the fun, varied character design on display.

I’m truly thankful that Nintendo have chosen to migrate most of their forgotten Wii U hits over to the Switch, and Donkey Kong: Tropical Freeze is undoubtedly one of the strongest side-scrolling platform titles in recent memory – you owe it to yourself to own this game.

Donkey Kong: Tropical Freeze is as impressive now as it was back in 2014. Displaying gorgeous visuals, fantastic level design and a steep difficulty curve that seasoned players will appreciate, it’s a game that fully deserves a spot in your Switch collection.