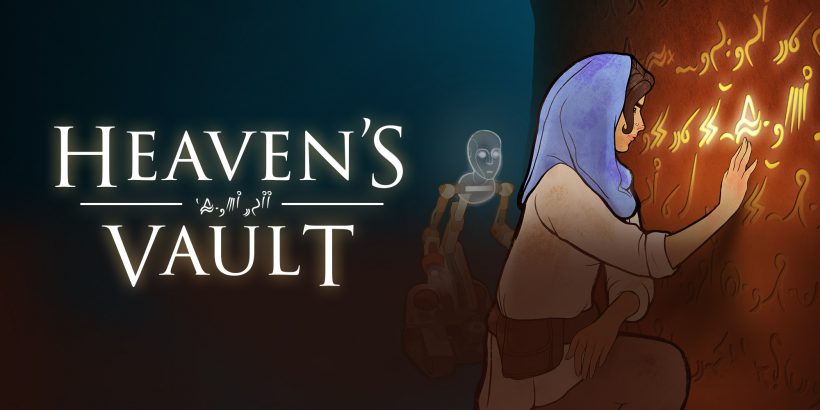 Nominated for numerous awards and coming from acclaimed indie developer Inkle (the minds behind mobile hit 80 Days), Heaven’s Vault is a game that has already garnered some attention since its initial launch in 2019. Thankfully, the game lives up to the expectations set on other platforms, with a distinct visual style and a unique language-based core puzzle mechanic.

As Aliya, a historian focused on uncovering and translating ancient languages, you’re sent on a mission to find a missing roboticist who has left a trail of cryptic artefacts and clues in their wake. From there, you’ll travel to a range of different environments, interacting with locals and solving mysteries as you go, slowly putting together a growing timeline of events to piece together the truth behind this disjointed nebula.

Heaven’s Vault has a unique art style, placing hand-drawn 2D characters into a fully 3D space. Occasional jankiness and stuttering can be a little jarring to begin with, and might explain why this approach isn’t adopted by many other modern titles, but the style does give the game a standout, bold graphical appeal overall.

Its visuals and style may mislead, but Heaven’s Vault is a true science fiction story. You’ll sail between destinations like Treasure Planet, with a ship that navigates cosmic waves to find distant moons to explore. The sailing aspect of the game is relaxing at first, but can get old pretty quickly as there’s not much to it. While you do have the option to skip these sections by delegating to your companion, there are sometimes ruins and artefacts to be picked up among the clouds along the way, so it’s better to probably stick it out.

The unique aspect of the puzzling in Heaven’s Vault lies in uncovering, transcribing and understanding an ancient language, left behind piecemeal in disregarded signage, ruins and relics. Initially, translations you make will be vague, educated guesses at best, but as you progress further and start to encounter similar phrases, getting contextual clues based on where the texts are inscribed, you’ll quite literally be able to piece together history. Those ‘eureka’ moments are unlike the buzz you get from normal puzzle-solving, as they all feel connected, as if they’re working toward a greater goal. It’s incredibly satisfying watching all of your prior recordings start to make sense as you slot in a newly learned cluster.

While the puzzles are the game’s standout element, it’s also quite a deep non-linear narrative adventure, branching off and differing depending on the choices you make throughout. Unlike a Telltale game, however, you don’t really know when a decision you’re making is a big one, and a lack of manual saves make even the most subtle of dialogue options potentially drastic. While frustrating not to have been given the option, it’s a choice that works to the game’s strengths in a way, adding to the sense of mystery.

Your robot companion, Six, while helpful at times, is also rather insufferable, pestering you on a C-3PO level but without the humour or charm. The fact he’s assigned to keep tabs on you throughout your journey says a bit about IOX, the ‘Empire’ of this nebula, who make sure to have a hand in the business of others. You’ll start to get the feeling that some people you encounter are a little bit more sinister than you may have thought, and it can have an effect on how you want to proceed with reporting back what you’ve learned.

One shortcoming of Heaven’s Vault is its occasional emptiness within environments. The music and VO are great, but exploring feels quite empty, with only slight ambient noise and effects. It’s serene, sure, but some livelier music, sounds, and full voice acting to the standard of the narration Gem Carmella provides could have taken its story to the next level. As far as this new version is concerned, the game feels right at home on Switch. The calming gameplay is perfect for playing in handheld mode of an evening, and touch functionality makes good use of the hardware to give you an additional control option.

Those enthralled by the fictional ancient language will be pleased to know that the new game plus adds a ton of replay value. Not only are symbols more difficult to decipher, but having the benefit of historical hindsight means that you’re able to change decisions you have made (and perhaps have come to regret), and discover secrets that you didn’t even come across the first time around. It’s as if you’re embarking on a new journey, picking up the mantle from a previous historian and adding to the ever-growing corpus of data to help you truly get to the bottom of the story.

Overall, while some additional polish would have made the experience that bit more enjoyable, the core language system within Heaven’s Vault shines through, making it a truly unique, must-play experience for fans of narrative-driven games. With in-built touch functionality, the Switch version is probably the best one to go with for fans of Inkle’s games coming over from mobile platforms.

Heaven’s Vault is a truly unique sci-fi adventure game from Inkle, combining a non-linear branching narrative with an ancient language system begging to be uncovered and deciphered. With a good length and plenty of replay value, it’s a story worth diving into.