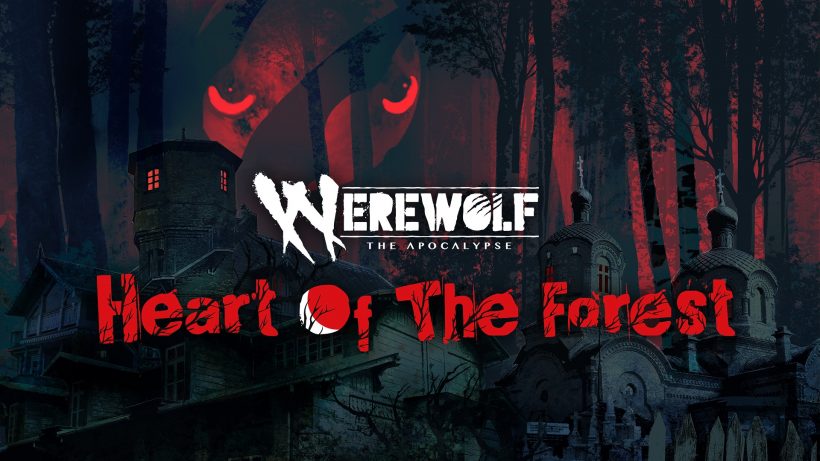 Not to be confused with the equally awkwardly named Werewolf: The Apocalypse – Earthblood that recently released on non-Nintendo consoles, Heart of the Forest is less a third-person action game and more of an RPG-inspired visual novel that places storytelling front and centre. Both titles are based on the extremely popular World of Darkness tabletop game, concerning – you guessed it – werewolves, but it’s hard not to feel like this is a more suitable translation given the richness of the source material. The book-like gameplay also works perfectly on Switch, letting you cosy up on the couch in handheld mode to enjoy a deeply atmospheric tale.

Heart of the Forest doesn’t waste any time in placing you at the centre of a mystery, casting you as 24-year-old college student Mai, who returns to her family’s Polish hometown in search of their secret origins. The game itself doesn’t take very long to complete, but what it lacks in length it easily makes up for with interesting characters to speak to, cruel twists in the story and many tough decisions to make. The beauty of it is that, despite there being static graphics sitting alongside the text, the visual novel approach allows you to form such eery experiences in your own head.

When the term ‘visual novel’ comes to mind, you likely think of over-sexualised JRPGs where the main crux of gameplay is speaking to different characters. Heart of the Forest is somewhat like this in that most of your time is spent reading reams of endless text, though developer Different Tales has done a good job ensuring that the prose is written well and always flows well. It’s true that all you’re ever doing is continually pressing A and occasionally making character decisions, but it quickly became natural and will be second nature for players used to curling up with a good book.

Your mind does a lot of the work filling in all the unique settings, characters and actions being relayed to you, though as mentioned, there is some artistic guidance by way of hand-illustrated graphics that do well to set in a folklore vibe. Heart of the Forest is, of course, based on a tabletop game, and luckily the minimal RPG elements embedded here also work to help you have a slight impact on the story’s outcome. This is all built around three specific attributes: Rage, Willpower and Health.

Health is pretty self-explanatory. There are various moments in the story where Mai becomes at risk of taking damage, much like in a tabletop game, but these can largely be avoided should you make the correct decision. Then you have Willpower, which dictates how confident Mai is feeling and how close she is to achieving her goal of finding out her family’s origins. Initially, you can only build your Willpower up to a max of three points, where spending them can open up more revealing story opportunities. Rage speaks to Mai’s, shall we say, ‘hairier’ side, working similarly to Willpower except that certain decisions and dialogue might be out of your control depending on the Rage level.

The attributes system always reminds you that what you’re playing is more than a simple digital novel, remaining faithful to the world’s tabletop roots by letting you swerve and shape the story. It isn’t too spoilery to say that Mai will eventually succumb to her true nature of becoming a werewolf, but how you choose to handle that with the knowledge and actions available is entirely your choice. Several times in Heart of the Forest did I wish I could do certain sequences over, but it simply wasn’t possible. That’s why I came to appreciate the overall tale’s short length, as a replay will no doubt see things play out differently.

Heart of the Forest is a story that surprisingly takes its time for a game with ‘werewolf’ in its title, letting you get to grips with roleplaying as Mai in the first three chapters before she undergoes these huge life changes. Hearing this might seem like a brave choice from the outset, yet it’s absolutely the correct one and gives each half of the game a slightly distinct flavour. This is mainly because, once you transform for the first time, you can then approach situations in different werewolf forms. Do you solve the issue in the more dog-like Lupus state, or transform fully as the hulking Cronos?

I really came to adore Werewolf: The Apocalypse – Heart of the Forest by its end, even if it forced me into narrative corners I didn’t like and transformed my Mia in ways I could never predict. This mode of storytelling is like nothing I’ve ever experienced before on my Nintendo Switch, and while the game is available elsewhere, it’s clear that here is the perfect fit. The core story may be quite short, but it in no way dampens the characters you meet along the way and the Polish-Belarusian sights you get to visit, all as you come to terms with the beast that’s inside you.

Whether you’re an avid reader or not, Heart of the Forest is a visual novel/tabletop RPG hybrid that plays ace on Switch. You owe it to yourself to play it.

Heart of the Forest is the perfect novel with which to settle down with your Nintendo Switch and cosy up on a folklore adventure. It may be steeply set in its tabletop origins, but all these elements work brilliantly in the experimental format.