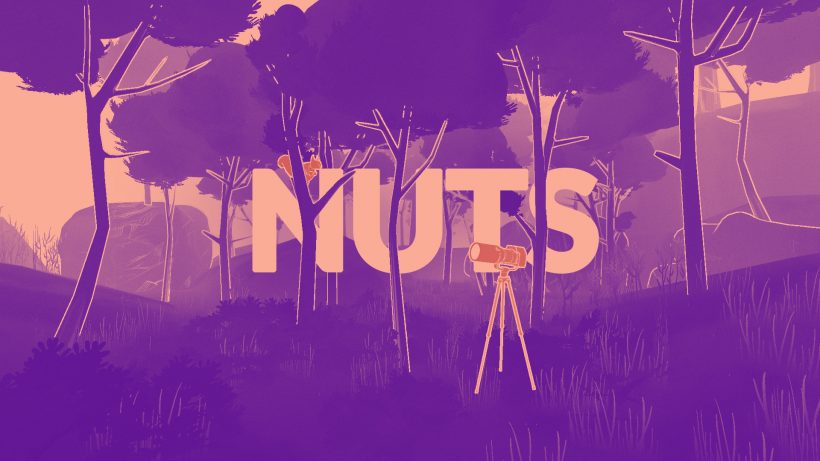 If you go down to the woods today, you’re definitely in for a surprise… The release of NUTS on Nintendo Switch promises a bizarre but beautiful wildlife photography adventure, asking you to care for a group of squirrels and their habitat. But within moments of setting foot in the forest, you’ll notice that something is amiss. NUTS has you taking up observation of these squirrels overnight as, after placing your cameras in a few advantageous places, you’ll hunker down for the evening and scroll through the footage to find out just what is going on. But is this a case worth cracking? Or would you be nuts to play this one…

With a stark, colourful art style and a narrative-heavy plot involving you being sent into the woods, it’s very easy to look at NUTS and make comparisons to Firewatch. But, although there are themes and mechanics that are clearly similar, NUTS does a lot to set itself apart with some intricate gameplay and cute protagonists. You are a scientist who has volunteered to assist in the observation of a group of squirrels, but the weird and surprising reasons why will slowly be explained to you as you play. Since you’re alone, every part of the mission is up to you, from scoping out squirrels’ trajectories, setting up cameras to film them, then finding them later on in the footage and faxing evidence to your boss. It’s a long and slightly obtuse process, but there’s a great deal of charm and fulfilment for achieving it all.

You’ll spend most of your time sitting in a chair, scrubbing through hours of nighttime footage of squirrels to find both them and their paths through the forest. Over subsequent nights you’ll follow individual squirrels’ routes to find out where they end up and what they’re all up to. Following them can be quite difficult, as they dart around frantically or duck behind foliage and the prerecorded camera footage is obviously static. But even having the patience and memory to track the next part of each route with your cameras can be tricky. This isn’t the only mission, as that would definitely be too monotonous, but it’s what you’re up to for a fair and comfortable amount of time.

At about five hours long, depending on how you play (I got lost an embarrassing amount), there’s only a handful of missions in NUTS to actually complete. But each one has a fairly large task, with meaningful phone conversations to subtly explain the mysteries interspersed as you discover more information. Sadly, the game only saves between each chapter, so you’ll have to try and put aside the time to solve and finish each mission. The challenge can be tough too as, while missions start out fairly simple, they eventually take on complicated caveats, and sometimes the squirrels will just be super tough to find.

Adding more time to this is the satisfyingly tactile, but often confusing way that you navigate your monitors and campervan. The interface here is a free-roaming cursor that you have to hover over each item you want to interact with. It works fine, but with a tiny reticle and a difficult time telling the colours apart on occasion, it’s often fiddly to do the things you want or need to in each mission. Meanwhile, outside of some broad hints in your journal and the phone calls with your scientist, there’s often very little here to assist you or point you in the right direction. Along with the minimal soundtrack and stark art style, this is clearly done to help you feel isolated and in control of your tasks.

Yet, while it’s cumbersome and sometimes frustratingly vague, I found myself enthralled exploring the wilderness of NUTS thanks to the stunning visuals and absorbing narrative. The phone calls you have with your boss are well-written and very well-performed, adding a touching sense of reality to a very silly, brightly coloured world. The story drip-feeds you information, but keeps you wondering about certain motivations and somehow injects a great sense of creepiness into the experience as well. While not entirely unpredictable, the story is incredibly well-presented and worth sticking with through to the end.

With hidden secrets in some corners, such as cassette tapes containing more insightful dialogue from your boss on her previous expeditions, and a beautiful environment to explore, I often forgave the idiosyncrasies of NUTS because I was simply enjoying wandering through the wilderness and exploring. I also found myself giddily trying to get funny pictures of squirrels, only to print them out and stick them on the pinboard in my cabin. There’s just a lot of attention to detail in the smaller things, that was appreciated and rewarded exploration and experimentation at every turn.

NUTS might be a bit too cumbersome for some but, for others, this will be a nut well worth cracking open. Each new mission had me pining for more squirrel pictures, and enjoying the tiny details that brought this world to life. Put simply, fans of wildlife exploration and narrative-focused games walnut be disappointed.

A beautiful world, begging to be explored, with captivating tasks. The interface can be cumbersome, and the instructions vague, but that’s peanuts compared to the sense of exploration and intrigue that NUTS cultivates. Don’t let me cashew ignoring this one!