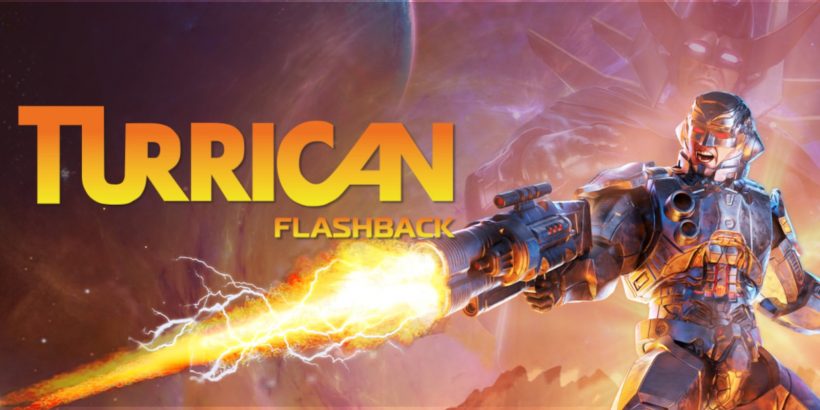 At the time of its original release on the Commodore 64 in 1990, the first Turrican game was an instant classic of the genre, featuring huge levels, inventive weaponry, and a killer soundtrack. The series managed to sustain a level of quality for its successive releases, and Turrican Flashback pools four of the games together into one compilation.

The planet Alterra has been rendered inhospitable, following a failed attempt at bioengineering. Genetic science however has crafted a saviour, Turrican, who revisits the planet to eliminate the hostile organisms that have taken over. What this amounts to for the player is an arcade shooter set across sprawling side-scrolling levels ripe for exploration. There are obvious influences in its execution: amongst many skills, Turrican can roll up into a Metroid-like ball to avoid danger, and there are timed jumps on moving platforms and hidden power-up blocks that recall the antics of Mario.

There are a varied number of enemies to defeat throughout all four games in this package, and Turrican is armed with some satisfying weapons to cut through the opposition. Besides a selection of different ammo types for his primary rifle, a Super Attack unleashes a screen-wide blast that clears all the threats around you. Additionally, holding ZL while rotating the left thumbstick unleashes the Laser, which not only eliminates the enemy, but also highlights any hidden blocks that conceal power-ups. Turrican is a series that likes to offer hidden bonuses if you take the time to search. Boss fights are scattered throughout and, refreshingly, not always at the end of a level.

Turrican II expanded on the foundations of the first game, benefitting from the 16-bit Commodore Amiga being its lead development platform with an increase in graphical fidelity. Mega Turrican took the battle to the Mega Drive, while Super Turrican, pitched as a game featuring the best elements of previous releases while adding new ideas of its own, launched on the SNES.

All three of these games join the original Turrican on this compilation, and if you enjoy one of them, you will enjoy the others. The gameplay is similar throughout them all, with subtle differences in execution. Mega Turrican offers a slightly more linear level design, and introduces a grappling hook, which doesn’t quite live up to the magnificence of Turrican’s previous gadgets. Super Turrican, meanwhile, tweaks the rotational laser beam to make it a Freeze Beam that stops your foes in their tracks, giving you valuable seconds to blast them with your rifle.

Although the games weren’t as brutal with their difficulty as many other releases of the 90s, it’s kind of Factor 5 to introduce some 21st century safety nets to your mission. A rewind feature allows the player to undo any errors of judgement, and there is also the reassuring option of saving your progress at any point during the game.

Different display options are selectable too, including widescreen — if you don’t want to constrain yourself to the authentic 4:3 format — or the addition of CRT scanlines. There are other optional sound and graphics variables to tinker with too. Of note is the Chris Huelsbeck soundtrack, which was iconic in the 90s and remains as potent now.

It’s a shame Super Turrican 2 has been omitted from this collection (although it is included in the Turrican Anthology releases coming soon from Strictly Limited) but it’s a treat to play this classic franchise on the Switch.

Although this is not the complete Turrican story, there are nevertheless four extremely playable arcade platform shooters in this collection. Turrican is an iconic 90s series that fits the Switch like a glove.