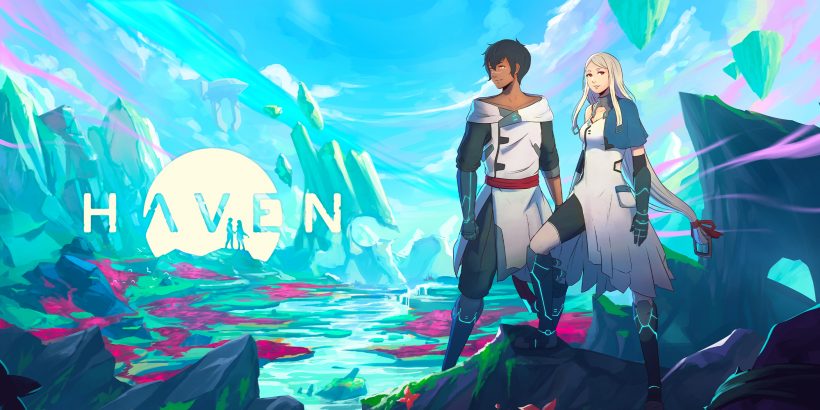 A compelling and genuine romance story within games is hard to come by. It’s often difficult to capture a real human connection like this, especially when you want it to be believable. The execution in other titles usually comes across as clunky, awkward, or just simply half-baked. The Game Bakers have cooked up a treat with Haven, as lovers Kay and Yu embark on an almost Journey-esque adventure of discovery and survival.

The basic set-up and premise of Haven is drip-fed to you over the combatless two-hour prologue. This might sound like a point against the game’s pacing, but far from it. The serene and ethereal opening does wonders for the narrative set-dressing, and the player’s comfortability with Yu and Kay’s relationship benefits from this, forming the bedrock of how you perceive the pair in the hours to come.

Kay and Yu have escaped to a strange, remote planet called Source, fleeing the oppressive culture of the Apiary, a society that couples up single adults. Having fallen in love naturally, but not chosen to be each other’s designated partner by The Matchmaker, they decide to strike out on their own.

Finding themselves stranded on Source after their ship is damaged, Kay and Yu must collect resources to feed themselves and repair their home. As the game starts, Yu mocks the culinary antics of Kay who seems to be making an Appledew-inspired dish for the third day in a row. Cooking is a large part of this title, enabling Kay and Yu to replenish health, get over fatigue, and progress their backstories through conversation. Food, hunger, and cooking are all regularly spoken about by the pair, often in humorous and genuine ways that makes the relationship that much more iconic.

The illustrated sprites of each character, which accompany the dialogue text, are in an appealing art style, varied enough in design to make you forget they aren’t fully animated. The voice acting is also stellar, with only a handful of awkward flirtations that are surprisingly suggestive when taken in isolation from the rest of the narrative. A blue outline highlights the speaker, making sure that even those who have hearing impairments are never confused as to who is speaking at any one time.

If you miss any of the dialogue, which is set to auto play by default to cut down on button presses, the pause menu houses a handy chat log of the most recent replies from each character. It certainly isn’t exhaustive, and it doesn’t go back as far as your save file, but it’s involved enough to help you catch up should you have missed something several responses back.

Beyond the beautifully designed illustrations which accompany the exposition part of the game, the world of Haven can look a little rough around the edges. The physical models of Kay and Yu look low poly in comparison, and the world of Source is lacking in visual variety, from creatures to the local fauna. The gameplay, however, is very well delivered. Kay and Yu glide majestically across the ground and through the air with anti-gravity boots. Stopping dead in your tracks is discouraged, with the game encouraging perpetual motion, with sliding and gliding on the agenda.

Where the game does eventually force you to come to a halt is during combat. A rust-like substance has begun to corrupt some of the local wildlife. This pixelated red ooze, which appears to be an asset imported from Astral Chain, has made the animals hostile to your presence. Despite the static nature of the turn-based combat, the actual controls fit the feel of the game. Ranged and melee attacks can be queued up for both Kay and Yu independently, with an energy shield ability being able to negate up to 50% of incoming damage, no matter who has it equipped. There’s a certain flow to everything that just works, and it’s executed flawlessly with minimal UI.

Kay and Yu can even join forces to unleash devastating combo attacks, but be sure to take note of what is effective as not all enemies react identically to the same abilities. Once unconscious, animals can be cleansed of corruption by selecting pacify, but be sure to do this promptly as knocked down enemies can re-join the fight.

Throughout your time with Haven, you will grow Kay and Yu not only as individuals but as a couple. Multiple-choice replies during conversations and your actions during free-roaming have the potential to grow their confidence and increase their bond. When you level up your relationship, both Kay and Yu receive abilities such as improved gliding and an increase to max health. As health can only be regenerated fully in the ship or through a campsite outside of combat, having a larger health bar to work with becomes invaluable quickly, as more challenging enemies descend on you throughout the game.

Haven is a touching adventure of two lovers in an intriguing fantasy world. Levels might sometimes seem a tad empty, with a ridiculous amount of loading screens interspersing them. Tasks may be a smidge repetitive. But the genuine heart on display ensures that this game will stick with you for longer than you would expect.

Haven is an incredibly zen and cathartic experience that has a genuine human relationship at its core, with combat that expertly manages to match the airy flow of the overall gameplay. It sets an incredibly high bar for quality.