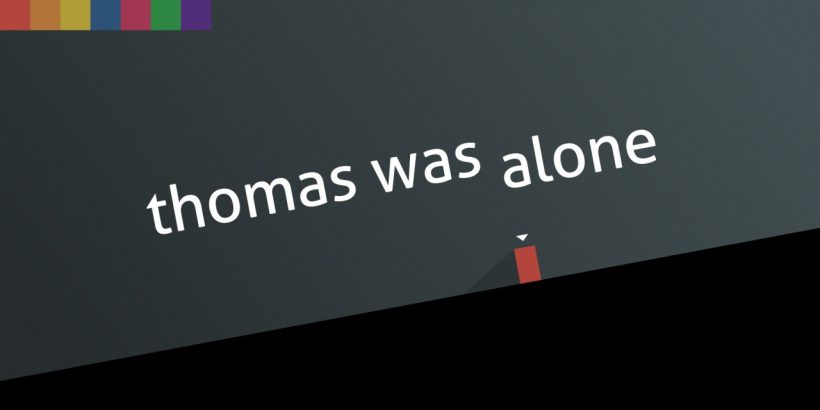 We come in all shapes and sizes. Thomas is a rectangle and, as the opening commentary in the game explains, he is alone. It’s intriguing that he is even aware of his isolation. He has a level of self-awareness that the tetrominoes in Tetris never achieved.  Thomas is a sentient block in a 2D world, with no obvious initial objective other than to move. He is perhaps as perplexed by his own self-awareness as the player is, but the in-game narration acts as a guide to push Thomas on, and to find out what purpose he has in his unfamiliar surroundings.

In essence, Thomas Was Alone is a puzzle platformer, with the aim being to navigate Thomas through each level and reach the portal, a white rectangle shaped to his proportions. Levels are numbered in batches of ten, and the first batch teaches the basics for movement. He can move left and right and jump, and this is the sum total of Thomas’ skills (actually, he is “absolutely fantastic at falling” too, as the humorously dry commentary explains).

Even in those first levels, Thomas questions his environment. Are the portals leading him anywhere of importance? Has this world been designed just for him? Is he being tested? His lonely journey becomes more interesting for him, and indeed the player, as the game progresses, and new sentient blocks are introduced. They each have fascinatingly different personalities, but despite being two-dimensional shapes, their hopes and worries can be relatable to people we perhaps know ourselves, or even a reflection of our own selves.

As each character is introduced, they are added to the tally of blocks that the player has to move to the exit portals. Chris is a cynical and strong-minded small square, while Claire is a significantly larger square with a caring heart and the burden of self-doubt. John on the other hand is a tall thin rectangle armed with an ego and a need to entertain. A tap of L or R switches between characters, allowing you to guide them individually to their destination.

Beyond their emotional traits, each shape also has unique movement skills that form the fundamental basis for the puzzles in the game. Claire can float on water to act as a platform for the other shapes to travel on, an ability which she rather sweetly considers a super power. In principle it is, as water is fatal to the other blocks, and causes a reset to the last checkpoint location (which is rarely far away). Thomas himself is a useful step-up for the short and stocky Chris, while John benefits from a much higher bounce.

Each block has to reach their respective portal to proceed to the next level, and so careful planning is required to navigate the landscape with each of them successfully. It is this format of gradually introducing new characters that elevates the challenge ahead, although the game never proves too taxing, and on occasion there is repetition in the requirements for completing a level. Several other self-aware blocks join the story as it proceeds, and an ominous pixel cloud floating in their vicinity adds to the intrigue.

Visually, Thomas Was Alone is strikingly effective, with stamps of colour from the main characters presented against the muted tones of their environment. The in-game typography is clean and easy to read (every moment of narration is also printed on-screen), and the game plays smoothly in handheld or docked.

Comedian Danny Wallace provides the narration that conveys the unique personality of each block, and his performance earned a BAFTA Games Award. The soundtrack was also BAFTA nominated, an atmospheric creation by David Housden featuring minimalist piano keystrokes blended with lush string arrangements and synth bleeps and beats. It is effective without being invasive, a masterclass in sound design.

Thomas Was Alone has appeared on several formats before, with the Wii U version being the only previous appearance on a Nintendo console. This Switch iteration includes Benjamin’s Flight, an additional pack of 20 levels that brings the total number to 120, and an insightful director’s commentary by creator Mike Bithell.

Like the characters within it, Thomas Was Alone seems to be more worldly-wise than you would expect, with references to other well-known video games and their cultural impact. The game is able to poke fun at the conventions of the platform game format, and works in small bites or as a few sustained evenings of exploration. It is a game that will remain with you long after completion, joining other indie gems such as A Short Hike and Gris that provide emotional resonance on an interactive level that only video games can offer. The purity of concept shines in Thomas Was Alone, and although this Switch version has no exclusive content, it’s fantastic that Switch players have the opportunity to play the game.

Ultimately, Thomas Was Alone is a game about friendship: the value in reaching out and making that connection with others, and the ability of those bonds to help us grow. Why not join Thomas for a little adventure?

There is a genuinely heartfelt story to be told between the self-aware blocks of Thomas Was Alone, married with excellent visual and audio aesthetics. A puzzle game with a heart and soul? That’s a rarity.