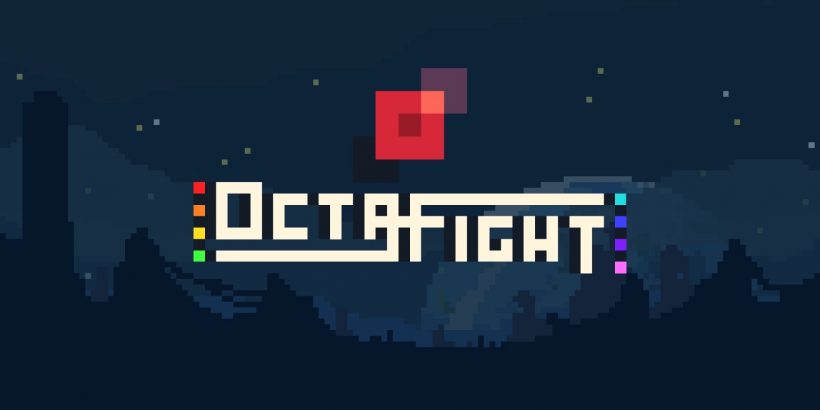 Grab yourself a friend – or seven – to enter a world of pixels, bombs and survival. OctaFight is an arcade game played across different stages, with every character exactly the same size and with all having the same attributes so that you start on a level playing field. You choose how you want to play the game through a series of modes, including a battle where you bomb each other until the last person on screen is the winner, or a ‘points’ mode, where scores ranging from one to ten are needed before the game is won.

Battle victories reward you with coins, which you can eventually trade in for bigger bombs or, my personal favourite, the bouncing bomb. Be careful with these, though, as if you time your throw incorrectly they can backfire!

The best game mode in OctaFight has to be one in zero gravity, which is totally bonkers. In addition to bombs flying everywhere, jumps will send you flying to the ceiling. It can turn into utter chaos, but it’s great fun. Gameplay overall is tight and has responsive controls, even if I still find the Joy-Con too dinky. With the Joy-Con side-on the A button throws your bombs, B is jump (which you can hit twice to double/wall jump) and Y surrounds with you a temporary protective shield.

From the bombs to the characters themselves, everything in OctaFight is a tiny square pixel, and it works really well with an endearing quality. Everything moves smoothly and the backgrounds are gorgeous. One stage has waterfalls flowing in the background, while others have animals moving around; all catch the eye nicely. The only issue with the graphics is that when there is a particularly frenzied match taking place, it can be difficult to see which character is yours, leading to some annoying defeats. If you like your party game music to be energetic and enthusiastic, then you’ll love the tunes on offer here. Electronic beats fit the action perfectly, and the developers have done a cracking job with these block-rocking beats!

Battles in the game are great for short bursts of play with a couple of people, although ideally, you want to be playing this with four or more friends, which in the middle of a pandemic is potentially tricky. That is not the fault of the game, but it is still relevant right now as you only have the option to play local multiplayer. I managed to play with three people for this review and enjoyed all of the battles – some lasted for thirty seconds, while others reached around five minutes. With more players, I can see battles lasting up to a good ten minutes.

Two things are glaringly missing from OctaFight. The first is the option for a solo mode against A.I., which with incremental difficulty settings could have easily been added as a single-player component. The second is the lack of online multiplayer, which has absolutely baffled me. I love couch co-op games and OctaFight nails that feel, but an online mode would have been the icing on the cake, making the title more accessible during these unprecedented times.

Overall, I’m frustrated with OctaFight. While I enjoyed my time with the game, its silliness, its looks and sounds, and found the battles an enormous amount of fun, not having online multiplayer or a solo mode feels like a missed opportunity. If you have the people around to play this game, I highly recommend you pick it up, as for less than a fiver you’ll have a great time. If you’re without friends or socially distancing from your gaming community, on the other hand, you might have to give this one a miss for the time being.

OctaFight is easy to pick up and play, and needs little time to master. Bombing your opponents off the screen to win is great fun, but with no online multiplayer or single-player, make sure you have at least one friend to battle with.