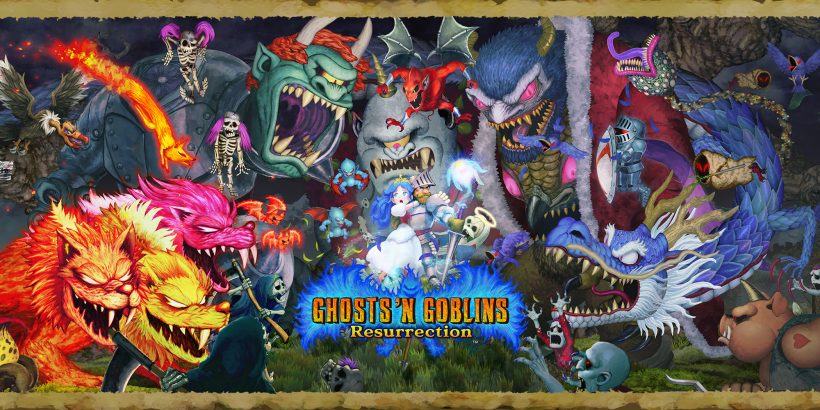 Originally released way back in 1985 and then ported onto a variety of consoles, Ghosts ‘n Goblins became renowned for its incredibly difficult platforming gameplay. Now, 36 years later, the latest in the series has been released on the Nintendo Switch with Ghosts ‘n Goblins Resurrection. Is this reboot worth the pain?

Ghosts ‘n Goblins Resurrection is a reimagining of the classics Ghost ‘n Goblins and Ghouls ‘n Ghosts. A love letter to retro gaming, this picturesque game tells the tale of Arthur the Knight on a quest to save his beloved Princess from the Demon Lord, Astoroth. To do this, Arthur must put on his trusty armour and enter the demon realm.

The game is a 2D platformer that features simple controls and gameplay mechanics, having to mainly use a combination of the B and A buttons — one to attack and the other to jump. What isn’t simple though is the game itself. As somebody who never experienced the original Ghost ‘n Goblins, I had no idea what I was getting myself in for. This was undoubtedly the hardest and most frustrating game I think I’ve ever played.

Upon loading the game up for the first time, you’re offered a choice of difficulty level: Easy, Standard, and Legendary. I chose the Standard mode — had I have known how difficult the game was I just might have chosen easy, which offers the player immortality.

Ghosts ‘n Goblins Resurrection offers players no tutorial, you just choose your preferred level and off you go. Although the lack of tutorial didn’t come as a surprise to me, what did was the fact you can choose your preferred route through the game. Well, at least for the first few zones. For example, your initial choice is between going through the Graveyard or the Execution Grounds. You’re given a little map layout of the level so you can see what to expect and then you can choose whichever you think looks easier. Spoiler: none of the routes are easy.

The main purpose in the game is to pass through a variety of zones, defeating enemies to get from A to B, usually coming across a boss of some sort at the end. Arthur starts off with a lance that he can throw at oncoming enemies, in all directions, but as you progress through each level you’ll come across other weapons to switch between. These can range from throwing daggers to hammers and even fire potions. The variety of weapons you come across is quite impressive. Each level is encumbered with enemies, all moving in different directions to get to you, which can be very overwhelming. One thing that I felt was a little annoying was that that the boss fights at the end of the levels were often a lot easier than the levels themselves.

It’s inevitable in Ghosts ‘n Goblins Resurrection that you’re going to get hit — a lot. But you don’t have lives in this game, as such. Instead, each hit you take rips off a piece of your armour, leaving you down to your boxers like some kind of weird strip poker game. If you get hit when you have no armour, you’re dead. Luckily, though, you don’t have to restart the whole level again. As you progress through a level you will trigger checkpoints, although these are few and far between, so you may end up being pulled back a little further than you would like.

There are various collectables to seek through each of the levels. These come in the form of hidden chests that are quite literally hidden. You’re usually required to hit certain spots on a map to get them to appear, and they typically contain a weapon, armour, or an object that will give you some extra points. You will also come across what are known as Umbral Bees, little floating rainbow creatures that are used to unlock and upgrade skills. You can unlock the ability to temporarily turn into a small boulder or even unlock an ability that gives you a chance of being revived after you have died (extremely helpful), among others. There are also in-game achievements to unlock which don’t necessarily reward you with anything but are still a nice addition.

As mentioned above, Arthur has the ability to use certain abilities or magic. This is done simply by holding the attack button for a certain amount of time. I really like the fact that you could use these abilities as they could help out in a sticky situation, but what was annoying was the amount of time it takes for them to charge in order for them to be used. I usually found that when I desperately needed to use an ability, by the time it had charged I would’ve already been hit — causing me to have to recharge again — or I could’ve just run through the danger. There are upgrades that can shorten the time it takes abilities to charge, it’s worth pointing out.

Ghosts ’n Goblins Resurrection’s art style is, quite simply, beautiful. It’s vibrant and colourful and a ton of detail has gone into putting together each level and all the enemies that accompany them. From desolate graveyards to icy glaciers, there’s a lot to be seen and each area is different enough to keep you interested in what’s to come.

Ghosts ’n Goblins Resurrection is a game that, the more you put into, the more you’ll get out of. If you’re willing to put the time and effort in, it will reward you nicely.

Ghosts ‘n Goblins Resurrection is an extremely challenging game that leaves you feeling both frustrated and rewarded. Players who are familiar with the series will feel right at home with this one.