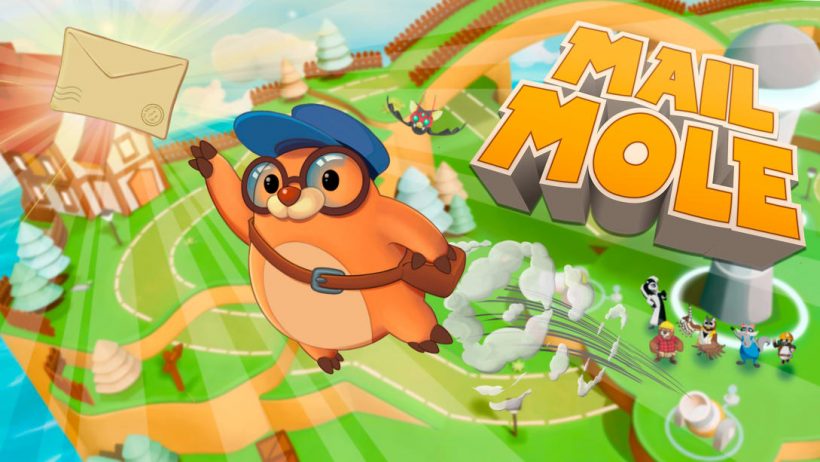 A small village of animals is planning their annual festival when, all of a sudden, an angry turtle in a UFO appears to steal all the town’s power. Truly a tale as old as time itself.

Molty, our adorable hero, has been summoned to Carrotland. The village needs Molty to deliver codes to far-reaching mailboxes in order to restore power.

Naturally, as a mole, Molty spends most of his time in the dirt. Players scuttle about underground, pressing B to leap gracefully in and out of terrafirma. Holding Y will allow Molty to move a smidge faster, and holding B for a short while will make Molty jump higher.

Utilising these controls, players must manoeuvre Molty into all kinds of different platforms. The platforms are full of tricks and traps to trip you up and off the edge.

There are seven different stages, and each stage consists of four similarly themed levels. From rolling hills to sandy beaches, winter wonderlands to sweltering deserts. Each level adds a new platforming challenge for players to contend with.

There are platforms that switch between visible and invisible every time you jump, ones that randomly appear when you are in the vicinity, and others made of sand that slowly sink while you touch them. The variety keeps the gameplay fresh and fun.

The graphics are cute and cartoony, bright and colourful. This is the perfect game to hand off to your little humans: the pace is light and easy, the platforming isn’t very demanding, and the violence is basically nil.

This doesn’t mean that platforming professionals should shy away from Mail Mole. Hardcore gamers can rejoice, for this game is almost begging for speedrunners to get their hands on it. There is even a speed-boost control mechanic: press the Y button exactly as Molty is landing in the ground, and he will receive a significant speed boost for a few seconds.

After a few successful deliveries, a lovely little skunk will call you over. This mephitidae has built mechanical moles to prove that the regular mole is inferior. Molty will be having none of that! Players will need to use all the speed boosts and shortcuts to come first in each race.

The music is charming, and fits the theme of each stage. The music on the main hub world is a soothing, generic, elevator music that you probably won’t really notice unless you are actively trying.

Now, do you want to see a mole dressed as Indiana Jones? How about a mole in a monocle? Mail Mole will scratch the itch of any fan of collectables. Each level is chock-full of carrots, the currency of Carrotland. Spend your carrots to make Molty the king of style.

While delivering mail is the goal at the end of every level, it honestly could have been anything. There are no heartfelt letters to grandma, or pleading entreaties to government officials for better public transportation. The mail is the magical McGuffin of the game; Molty could have been delivering carrots to orphan bunnies. The game had potential to be more emotionally engaging if the idea of mail delivery were better utilised. As it stands, it’s merely the reason Molty goes from point A to B.

Overall, Mail Mole is a delightful platformer in its purest form. The game feels like it was intended for a younger audience, but hardcore gamers will find things to keep them going as well.

Mail Mole is platforming action in its purest form. Considerably cute, moderately challenging, with gameplay aspects that will keep both newbies and hardcore gamers happy.