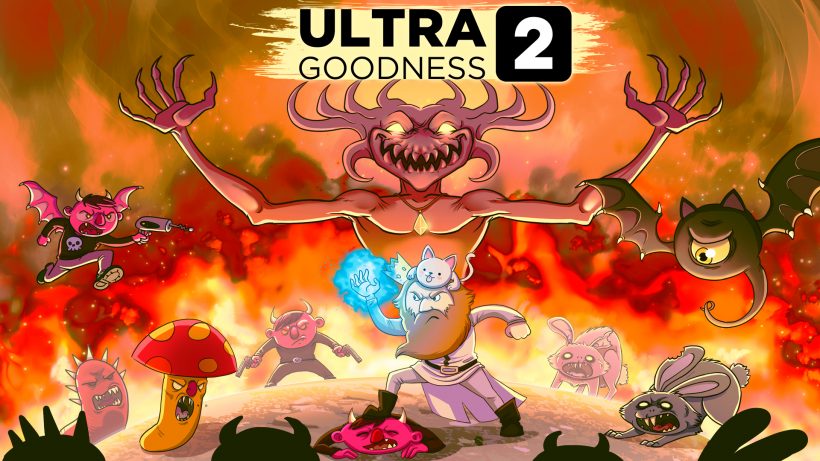 Evil has returned, and the land’s only hope is that a brave hero will step forth with enough willpower to sustain interest in an unoriginal repetitive shooter! A succession of overhead-perspective levels await, each filled with creatures to blast, and little else. Psychotic rabbits, fanged exploding mushrooms, devilish imps… they’re all present and homing in on your position. The question is: Is there really enough content here to encourage any desire to complete this mission?

The avatar under your control is – I presume – a king (complete with a shiny crown atop his head), although it could also be Jesus perhaps, if we are to interpret the classic battle as being against the Devil. There’s even a cat companion, and both characters fire their weapons in the direction that you pull the right control stick, with the left guiding your movement. Yes, it’s a twin-stick shooter; a genre that is hardly short on contenders.

The eShop pitch for the game includes a reference to “time manipulation”, but in essence, this is an aspect of Ultra Goodness 2 that bears little practical use. If you stand still and don’t shoot, everything around you slows to the extent that enemies (and their bullets) move sluggishly, allowing you a moment to ponder where to head next. In reality, it’s a feature that adds little. Twin-stick shooters are made to be played with constant movement; there’s no fun in remaining static.

Destroyed enemies drop gems amongst their gore-splattered remains, and these can be spent to upgrade your firepower. There are different formations of bullet trajectory available, but you’ll be able to progress through to the end of the game with little concern for upgrading. The king begins with five life-hearts, but if you lose them all, you can simply try again; there is no limit on lives. Completing a level allows you to restart from that point, and the regions that you play through include the classic trio of woodland, desert and ice.

The controls feel solid in execution. Some enemies launch themselves towards you at a rapid pace, while others burrow underground to reappear beside you. There is little variation as the game progresses, and this is the fundamental flaw to Ultra Goodness 2: it’s just too repetitive to remain engaging. More variety in objectives would have been appreciated. Your cat companion has some meaty power-ups, but they aren’t exciting enough to warrant exploring to any great degree. There are a few collectables to find on the battlefield that give you a little extra advantage, but tactical use of abilities isn’t required to advance.

Art design is functional. Though there are some fun characters, some aspects (including the menu system and the power-up designs) are too generic. During the early woodland stages, it can be hard to decipher where you can and can’t walk, due to the similar green tones that are used for areas of floor and the surrounding walls. The music adds atmosphere but isn’t enough to embolden your sense of adventure.

Overall, the fundamental building blocks of an enjoyable twin-stick shooter are present, but there is little original content and a lack of variety. Ultra Goodness 2 wants to flaunt the blood-spilling antics of its gameplay while suggesting its unique selling point is in time manipulation abilities, but the former isn’t enough to merit the journey, and the latter is redundant. This land is too formulaic. Evil forces can have it, there are other lands that offer more entertainment.

Twin-stick shooters occupy a crowded genre, and Ultra Goodness 2 is likely to get lost in the battle. Like the main avatar, the game has good intentions, but there’s not enough variety or originality to sustain interest.