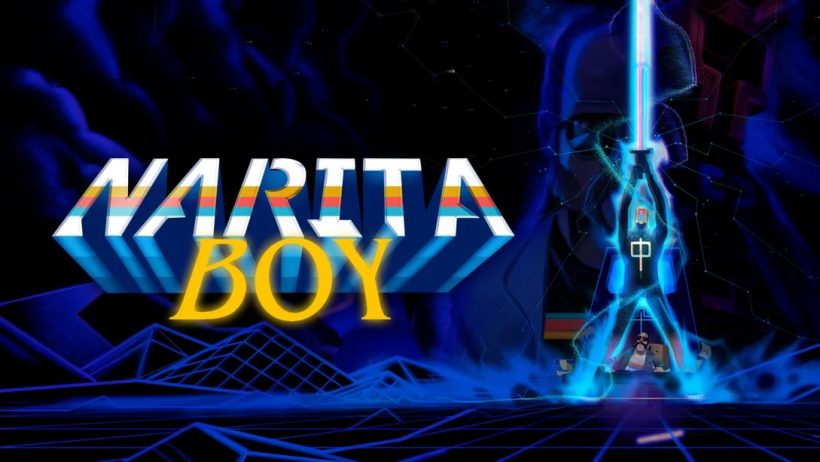 Pixel-drenched paradises are par for the course these days on Nintendo Switch. When we aren’t slashing our way through enemy-stuffed rooms using a blade in Katana Zero, we can always play the role of an 8-bit ninja warrior in either The Messenger or most recently Cyber Shadow. What I’m saying is that it takes much more than just retro-inspired visuals to make your 2D platformer stand out in 2021; this impressive level of style also needs to be backed up by exciting moment-to-moment gameplay. Does Narita Boy deliver on this? Sadly, not quite. But what it lacks in combat depth is more than made up for by a deeply atmospheric tone and pulse-pounding electro soundtrack.

You only need to look at Narita Boy’s key art to see where it pulls its influences from. The sight of a neon-laden humanoid figure raising his arms and blasting up a light into the air will be instantly familiar to fans of Tron or its 2010 sequel. In this case, though, it’s not an identity disc that’s being raised, but rather the legendary Techno-sword. As the sole wielder of this powerful item, you alone can save the digital realm, slashing through countless corrupted bosses and underlings to prevent the rogue program known only as HIM from taking over.

When I explain the narrative like that it probably sounds just as epic as developer Studio Koba would like it to be. The reality is, however, that Narita Boy places style over substance at almost every turn – at least on the surface. This does fine to push the pixelated visuals firmly at the forefront of your mind, but can become a little disorientating when you’re multiple hours in. This lack of context further isn’t helped by most NPCs speaking in gobbledygook. Sure, learning about the “houses of the Trichroma” or the meaning behind “creator totems” is good for world-building, yet it so often comes off as pretentious. Narita Boy is absolutely dripping with lore. I just doubt most players have the patience to penetrate the nonsense and get to it.

Story woes aside, the game does excellently to make it feel like you’ve been sucked into a world made up of code, cables, and circuits. Whether it’s a robot deer touting an Apple II-looking computer for a head, or the way floppy discs zoom into the foreground to announce the arrival of a new enemy type, Narita Boy really commits to the idea that what you’re playing was birthed in the 80s, even if most of the lighting effects and complex animations wouldn’t have been possible back then. Getting around also feels good for the most part, thanks to your ability to dash and climb up walls.

Initially, you might be tricked into thinking that Narita Boy resembles that of a Metroidvania. Surprisingly, it’s actually more linear with most locations serving as micro-hubs full of various paths to explore. Again this may have been a good idea in theory, but the lack of a proper mini map did result in me getting lost more than a couple times. Hey, I know, why don’t I just ask an NPC about where to go next? Oh yeah, because they’re too busy praying to the alter of the Trichroma or whatever. Poetic pretentiousness strikes again! Having no map isn’t a problem early on, but becomes more of an issue when you’re required to use a key in a specific hidden spot.

As alluded to earlier, combat can also leave a lot to be desired in Narita Boy. Swinging the Techno-Sword simply feels stiff a lot of the time, especially when compared to other games of this ilk that sit in the same genre. And despite gaining subtle abilities like bashing, upwards slashing and a close-range shotgun blast, the gameplay never really develops too much from your initial suite of abilities. There are a few, shall we say, ‘transformative’ sequences when what you’re able to do does change dramatically, but overall these instances are very rare. It’s a shame that actually performing strikes is never as fulfilling as it appears on screen.

There are just so many areas where Narita Boy frustrates more so than it probably should. Because while I constantly found myself bowled over by the synthwave sound design or the world’s minute attention to detail, it didn’t take too long for me to feel let down when looking at what it all amounts to. As far as retro-inspired 2D platformers go, it’s always two steps forward but sadly one step back. This is a game that absolutely oozes style and looks great in the moment. I’m by no means discounting that. Yet, as I’ve already mentioned, this surface-level dressing only gets you so far. Why not spend more time on helpful additions like a proper map?

From a stylistic standpoint, few other indie games on Switch can compete with Narita Boy. It easily succeeds in entrenching you within the look and feel of an 80s neon dream; I just wish that such ambition also translated into having the story, level design and combat be more coherent. If Studio Koba wanted to make players feel trapped within a microscopic circuit board they succeeded. Just make the journey through it as remarkable and enrapturing as the visuals.

Narita Boy is a neon-infused 80s fever dream, casting you as the hero of a microscopic digital system. The aesthetic and audio presentation nails this vibe. Just don’t expect engaging combat or a coherent story.