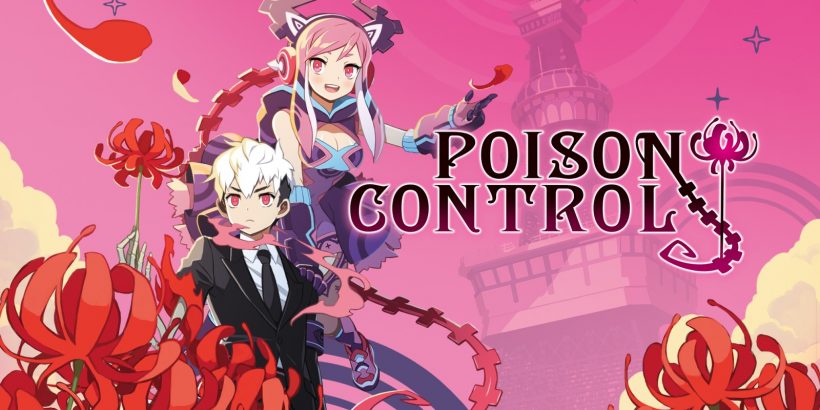 Even though a good portion of our favourite titles are actually made in Japan (after all, that’s Nintendo’s home), there’s a kind of separated category of games that are also made in Japan, but with the Japanese public in mind.

There’s a whole range of titles like that. From Persona to Danganronpa, these games actually broke the barriers of their specific demographics. Yet, more often than not, these types of games feature certain recurrent elements. They have stylized visuals, with strong anime inspirations when it comes to narrative and character-building (including the tropes you may expect). They also tend to explore niche genres, including visual novels, dungeon crawlers or musous, just to mention a few examples. If this kind of experience sounds appealing to you, then Poison Control may work as an option for something different and enjoyable. After all, it is not always the case that you can play a third-person shooter/visual novel mix.

Poison Control shows some of its best perks from the get-go. At the very start, you’re presented with a vibrant, stylized world that feels fresh and unique thanks to its sparkling pink aesthetics. With its cel-shaded 3D models, its anime-inspired 2D portraits, and its flashy HUD, this is a game that oozes with style at all moments. Alongside that you also have a striking soundtrack that does a great job in highlighting both the action and narrative moments with ease. Unfortunately, these visuals can become too samey as time goes by, especially inside the dungeons, which share a simplistic boxed format. Thankfully, the narrative does a good job of keeping you interested enough in what’s happening next.

In a broader sense, Poison Control tells two different types of narratives. At a macro level, you’ll follow the adventures of your protagonist, a human boy or girl that, for some unknown reason, has fallen into hell. After being attacked by a weird creature, you end up connected to Poisonette, a being capable of transforming your body into weapons. Together, you’ll need to clean out the poison that tormented souls are spreading throughout hell, as it is the only way to reach heaven. At a smaller level, though, there are many micro-narratives about each one of these tormented souls.

These “Belles”, as the game calls them, have suffered some kind of strong emotion in life, which has resulted into the creation of their own personal hells. This works on both a narrative and gameplay level – each Belle will have its own dungeon to explore. While you are at it, you’ll unveil their own personal stories, which are surprisingly varied in style and theme. While there’s a constant underlying dark humour in each, they offer a different range of feelings, with some Belles’ tales being more poignant, and others more funny or light-hearted.

With such a cool narrative concept and enjoyable presentation, Poison Control had everything to become one of those niche gems capable of captivating a loyal fan base. Sadly, the game drops the ball hard when it comes to gameplay. Here, too, Poison Control mixes up different things. With each Belle’s hell working as a separated dungeon, the game is reminiscent of a dungeon crawler, where you’ll walk from room to room, beating enemies along the way. The difference with Poison Control is that it features two main complementary mechanics: shooting and poison purging.

By holding ZL you enter shoot mode, where Poisonette transforms your arm into a gun. This mode works as you might expect from a third-person shooter, allowing you to use the different weapons you have equipped to dispatch enemies. Different than what you might expect, though, Poison Control keeps the shooting gameplay at a very basic level – and even then, it still fails to deliver something compelling. Most of the weapons work in a similar way, and if you ignore the damage numbers popping, enemies provide basically no feedback to show if you’re actually hitting them or not. This is especially problematic when you consider how imprecise the shooting reticle is in Poison Control. You can do your best to keep it over the enemy at all times, and still the projectile will do a different trajectory if you are too close or too far from them.

The poison purging mechanics aren’t that problematic, because they keep things simple. Certain points on the map will be sprayed with poison, and you need to hold the L button to do a reversed-Splatoon, cleaning what you can. There’s always a time-limit in how much you can clean at a time, so you need to be smart in how you do it, especially when there are enemies around. Also, there are some interesting interactions for this mechanic, because purging poison will replenish your ammo, and you can also damage enemies caught in the middle of the poison.

Overall, when you consider the addition of so many different elements, Poison Control is certainly a title like no other. It is one of those games where the highs are very high, but the lows are so low that I can’t really recommend it blindly.

With great presentation and an entertaining narrative, Poison Control is a weird mixture of dungeon crawler, visual novel and third-person shooter. It could have been the next great niche title, if not for its problematic shooting mechanics.