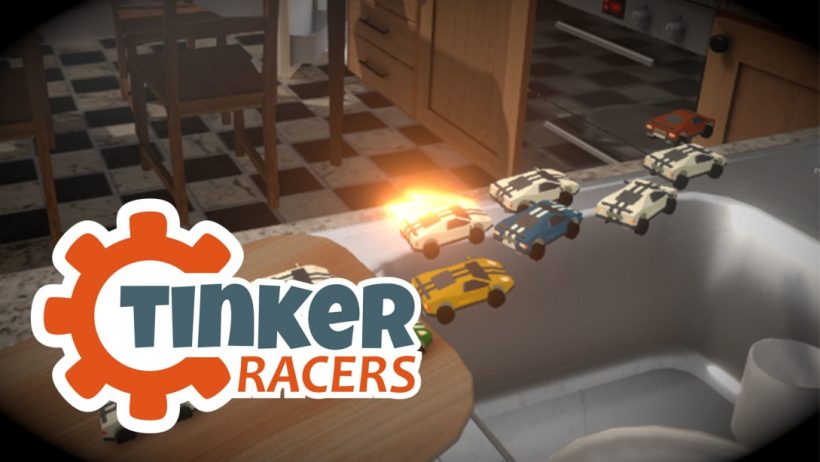 I’m sure I wasn’t the only kid who used to fawn over the shelves at Toys R Us, perusing the endless Matchbox and Hot Wheels racks in search of toy cars to play with during the ride home. The fun wouldn’t stop there either, of course, as other domestic settings like the kitchen, dining room and garden quickly transformed into an exciting racetrack. Even now, this minified approach to driving games continues to be a popular sub-genre, but does the unabashedly indie Tinker Racers successfully build upon the concept? Actually, yes. And it’s all thanks to some creative track designs and an ingenious emphasis on survival.

Tinker Racers won’t win any trophies for its graphics, true, yet this is more than made up for by the inherent challenge that comes from outracing your RC rivals. You see, whereas most games of this ilk would likely give you a series of home-based tracks and ask you to win a set number of laps, here your objective is to race ahead as far as possible in the hopes of wiping your opponents off screen. This neat spin means that holding back a little is sometimes a viable tactic, especially as more environmental obstacles are introduced. Nobody wants to be flattened by a falling piece of toast!

At times such unpredictable instances can be infuriating, throwing you off course just when you were edging your way to victory. Luckily, getting knocked off once isn’t ever the end world, because Tinker Racers challenges you and the AI to be the first to five wins. This often results in a surprising level of tension within the races, as you never want other cars to slowly claw back some wins just when you have one left to go. Many times while playing, for example, did I choose to play it safe and not utilise track boosts, all while hoping that the final car behind me would swerve and drop.

There are obviously multiple modes in addition to the core campaign that allows you to race with friends, compete in single races and perform time trials. However, one of the strangest decisions Tinker Racers makes is the lack of a garage. Different types of car or vehicle are gifted to you depending on the track. It’s a shame considering that collecting, purchasing, and customising cars holds a lot of appeal for players who enjoy racing games, and it would go a long way to infuse Tinker Racers with a bit more personality. Thankfully, a lot of the track designs do much of the heavy lifting here.

The career mode is split into various locations based around the average home, with each one split into four to six different tracks. Some are more inventive than others, but generally Tinker Racers nails the excitement that comes from dodging around printers, beach balls and counter tops while simultaneously trying to stay out in front. Almost every track features at least one element of sheer unpredictability, which can sometimes be frustrating when you end up losing a win through no fault of your own. This added challenge does, however, prevent you from cruising through races.

Tinker Racers isn’t a revolutionary new take on the miniature racing game concept first popularised by Micro Machines, yet the moment-to-moment thrill of having to outwit your rivals while navigating tracks full of oversized objects is always immensely fun. It is a shame that the graphics are lacklustre, and the customisation options limited, because these elements leave it trailing in second place behind its genre competition. Saying that, Tinker Racers is still a wild ride either alone or in manic four-player split-screen.

Tinker Racers makes the act of racing across sinks, chairs, and printers every toy car fan’s delight. It lacks the polish seen in other miniature driving games, but trying to survive against foes is a joy in bite-sized bursts.