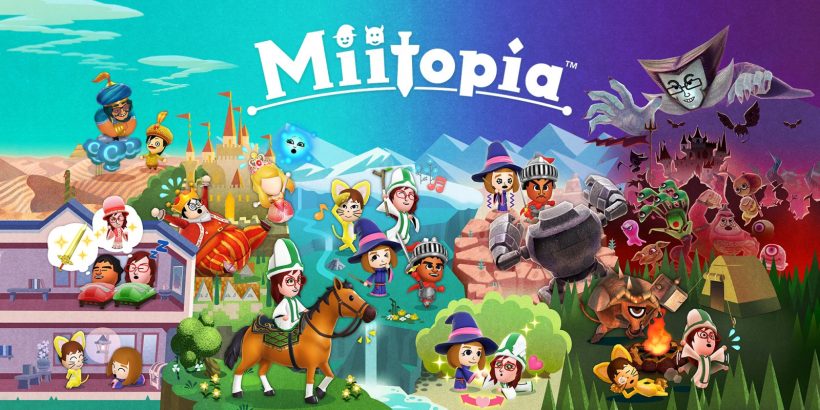 Similar to games such as Wii Sports or Tomodachi Life, Miitopia puts Miis front and centre.

This time, though, Nintendo has chosen to build an entire RPG adventure around the charm, weirdness, and humour of these Wii-era mascots. Previously a 3DS title, Miitopia comes to the Switch as an enhanced edition that is packed with many improvements on visuals, gameplay, and even some very welcome quality-of-life additions.

Miitopia’s story plays out in two different complementary layers. On the first layer, you have some predetermined events that set the narrative in motion. The titular world of Miitopia is a peaceful place inhabited by Miis of all kinds, until the Dark Lord starts to terrify people by stealing their faces and giving them to monsters. It’s up to you to defeat these creatures and return the faces to their rightful owners – all while you try to gather a party of friends determined to help you stop the Dark Lord once and for all.

With this basic premise, Miitopia sets a kind of theatrical stage and asks the player to fill in the gaps. Here lies the second layer of the adventure. The player has the power (and incentive) to create and choose specific Miis for basically every single character you will find during the adventure. From party members to NPCs you’ll meet along the way, almost everyone can be customised as you please – and here I should mention how powerful the customisation options are.

Instead of just taking the standard Mii creator from the Switch’s system, Miitopia adds a staggering amount of additional options for the creative types, including new elements such as wigs and make-up. Thanks to this almost limitless feature, you can create (or import from the internet) basically any imaginable character you want. It’s thanks to this feature that your adventure can become funnier in unique and weird ways. After all, it is not always that you can have Revali and Link fighting for Zelda’s love.

This idea of “creating your own adventure” is also explored by Miitopia when it comes to its RPG mechanics. From a gameplay standpoint, Miitopia takes inspiration from classics of the genre, including random enemy encounters as well as a simple but competent turn-based combat system. In the beginning, you’ll be able to create a party using the most common jobs found in the genre, such as a warrior, mage, or thief – each one with its own exclusive set of skills. However, in a very Miitopia fashion, things will go crazier sooner than expected. As you progress, you will also recruit weirder classes such as pop star, cat, and even flower.

An additional spice is added to these characters when you consider the four different progression systems that overlap during your adventure: levels, equipment, grub, and affinity. Levels and equipment work pretty much like any other RPG; grub is a bit more complex. Different enemies will drop specific food items, which you can give to the characters. The complexity comes from the fact that each item will improve a different status, and characters may have their own likes and dislikes.

Finally, the affinity system is a mechanic on its own. Basically, at the end of each level, there is an inn with different rooms available. By having characters share a room, they will slowly improve their affinity, which can unlock many different skills. You can also spend ‘outing tickets’ in order to send two characters to the beach or to the cinema (among other places), so they will become friendly. By doing that, characters can become more inclined to help each other in battle, increasing the damage of an attack, or even taking a hit for a friend.

As much as the sum of all these elements creates a weird and fantastic adventure, Miitopia isn’t free of drawbacks, and the way levels work is one of them. Instead of letting you freely explore each area, Miitopia’s levels take place almost as an auto-scroller, where you simply look at characters while they walk through each level. There are a few choices here and there, including maps with multiple paths, but that isn’t enough to remove the feeling that you are playing an idle game. At least you can hold B to increase the game’s speed. In addition to that, there are also limitations during combat. Here, you’re only able to directly command your own character, which hinders some of the strategies you can implement.

I also need to address the biggest elephant in the room: the game’s price. Miitopia is a lengthy RPG, which can take more than 30 hours to beat (and double that if you want to complete everything). There are many improvements and new elements in this Switch version – new graphics, interactions, and even a horse as a party member – but it is somewhat a hard sale when you consider the game is pricier than its 3DS counterpart.

Overall, however, if you want an RPG that is goofy and unpretentious, Miitopia may be a good option to consider. It offers an experience unlike any other game, and one that can be vastly different for you and Mii based on customisation.

Miitopia is an RPG adventure that uses Miis as a way to let players express themselves. Despite choosing to simplify some of the classic mechanics, it does offer goofy and funny moments for those willing to pay its increased price.