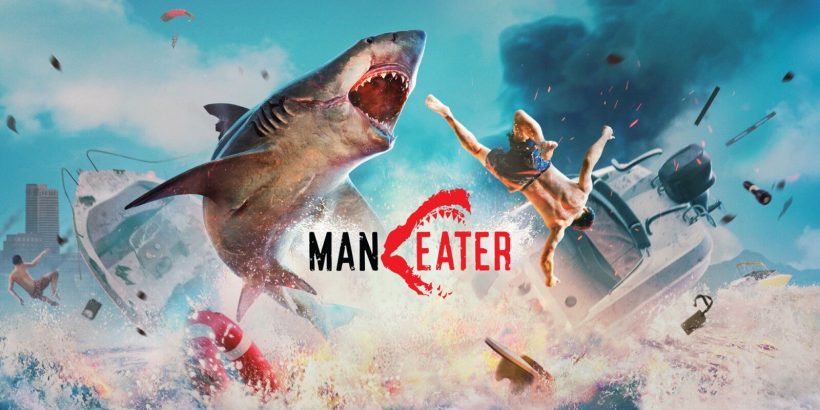 Whenever a meaty open-world game gets ported to the Nintendo Switch it’s always worth paying attention. How will it cope with rendering such a large setting? What concessions have been made to get it running smoothly? And, perhaps most importantly, does the full experience remain intact despite it running on lesser-powered hardware? It’s particularly interesting in the case of Maneater, because it’s not just one world you can explore but two. The life of a man-eating shark takes place just as much below the ocean as above, you see, and that’s one huge way this self-described “ShaRkPG” stands out. Overall, it mostly succeeds in letting players live out the ultimate sea creature fantasy, even if objectives get repetitive fast.

Presented through the lens of a fictional reality show clearly inspired by the likes of Gold Rush, Deadliest Catch and other over-the-top docuseries you might find on Dave, Maneater isn’t coy about how rough it is around the edges. This is an open-world RPG made by a tiny team, after all, so rather than try to be taken seriously, Blindside Interactive leans into its B-movie sensibilities using this quite campy framing device. Such a premise also helps fill airtime, seeing as having your bull shark protagonist speak would be a step too far – even for Maneater. Luckily, Rick and Morty’s own Chris Parnell does a great job as cheesy narrator.

Most of your time in Maneater is spent roaming the open sea, chomping down on wildlife and gradually evolving into a more refined ocean predator. Inspiring you to reach this goal is an early cataclysmic event: you are maimed as a pup after your mother gets gutted, shortly before being thrown back in the ocean by the shark hunter Scaly Pete. This paves the way for a different kind of revenge story where visiting multiple domains to become the dominant alpha sees you gain new attacks, abilities and upgrades. Before you know it, the shark hunter is suddenly the shark hunted.

Watching your bull shark grow from pup to teen to adult and all the way up to Megashark is genuinely thrilling, especially since most of the enhancements you acquire are depicted visually on your shark’s model. Unlocking bone armour, for instance, may offer better protection the next time you go head-to-head with a barracuda or alligator, but it also looks pretty badass as your flesh is suddenly caked in piercing enamel. Confident in your dodging skills? You may wish to forgo bone armour in favour of tiger skin, which offers its own gamut of survival perks and bonuses. Maneater has a lot of fun with these different special abilities. A personal favourite of mine became the electrified teeth, because they made short work of any smaller ocean prey.

Less inspired, however, are most of your objectives in Maneater, which end up just being generic. Rather than taking on a specific goal unique to each mission, reaching the rank of Megashark involves completing a near endless list of repetitive tasks. You’re always swimming to one point in the map to eat 15 humans over here, 10 fish over there, or to acquire this one arbitrary collectible just…. because. It tries to shake things up with its own GTA-style star system, Infamy, where causing too much chaos in a public area will draw out the hunting boats, but they never pose much of a problem.

Variety in Maneater instead stems from the many fish species unique to each area, the different look and layout of biomes, and the numerous equippable mutations already mentioned. This ends up just about being enough to sustain your gameplay appetite for 3-4 hours, but it quickly becomes monotonous soon after. Luckily, Maneater doesn’t outstay its welcome too much beyond this, and you’re never forced to outright complete each area’s total objectives before moving onto the next one.

I’m pleased to report that despite this ambitious design, the Nintendo Switch version largely manages to maintain a decent resolution in both docked and handheld mode. Certain environments and underwater locations can look smudgy, sure, but they get the job done and are no means as low-res as, say, some of the human faces the TV-style camera will sometimes swoop in on. Frame rate can be extremely choppy, though, especially as more enemy boats and fish begin to pile onto the screen at once. Still, this is far from the worst open-world port on the Switch that we’ve seen, a feat possibly aided by the game’s inherent schlockiness anyway.

Maneater – almost by default – instantly claims the title of being the best shark simulator yet. And while it is disappointing that the general crux of gameplay quickly grows stale, it’s hard to think of a better way to make story missions interesting when your protagonist’s primary mode of interaction is “chomp” and little else. The reality TV presentation is an expert workaround for where this ShaRkPG may have fallen down elsewhere, simultaneously unlocking more avenues for sea-based ridiculousness and self-aware humour. It’s not perfect, but this is a goofy shark game with bite!

Maneater is far from the fin-tastic open-world RPG we all want it to be, but when treated as the goofy shark simulator that it is there’s a lot of fun and laughs to be had. The ocean is your playground.