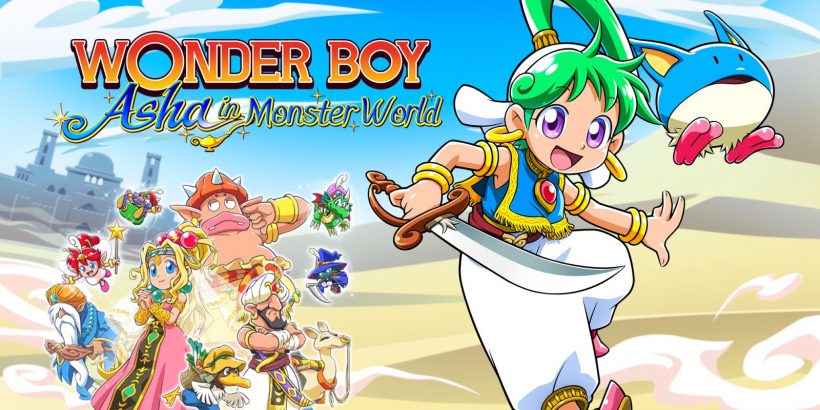 A lot of classic game series from way back yesteryear have had the re-release treatment on Switch, but even amongst all those, the Wonder Boy series has done very well for itself.

Earlier in the Switch’s lifespan, we got a new version of Wonder Boy: The Dragon’s Trap and a spiritual successor in the form of Monster Boy and the Cursed Kingdom. Now it’s the turn of Asha to come roaring into the twenty-first century.

This is a fully 3D remake of Monster World IV, which originally released on the Mega Drive in Japan in 1994. What is abundantly clear, though, is that the 2021 version of the game is packed full of vibrancy, colour and personality. Much like The Dragon’s Trap looked almost like a completely different game when that title got a Switch release in 2017, Asha in Monster World shows just how much life can be injected into a game by way of a high-definition coat of paint. That a game manages to create such a feel-good atmosphere around itself with an English-speaking audience when its voice-acting is all in Japanese (I think) should always be considered an achievement.

The gameplay, though, is quite conspicuous in its simplicity. Jumping helps negotiate the platforming elements and a swipe of the sword is often what’s needed in order to dispatch enemies, but the game’s one pseudo-characterising element is Asha’s Pepelogoo, summoned with the R button, hovering with a watchful eye over Asha’s shoulder when it’s not being used. Pepelogoo can come in mighty handy for getting Asha out of trouble, as it allows her to perform a double jump when she holds it above her head, and it can quickly fish her to safety when she’s plummeting to the bottom of a watery abyss. It can put out flames, which helps to solve puzzles, and it can even make a platform out of its own body so that Asha can hop upon it to bypass molten lava. Really, without the aid of Pepelogoo, Asha on her own would be a bit rubbish.

The necessity of having to call Pepelogoo each time you want to make a double-jump, though, makes for a particular bugbear when it comes to those times that multiple double-jumps are required in quick succession. Rather than simply double-jumping and then double-jumping again to make quick work of what should be a rather unintimidating obstacle, you’ll need to hold the R button between each double-jump until Pepelogoo is attached to Asha. This adds some really unnecessary time to the platforming which doesn’t equate to a satisfying challenge. Elsewhere we’ve seen the likes of Super Meat Boy make for an admittedly more complicated but considerably more fun challenge, but this feels like something firmly rooted in the decade from which it came. That’s not necessarily a bad thing, but it should be seen as a museum piece rather than something to make waves.

If you’ve got no prior experience with the Wonder Boy series, there are certainly plus points beyond the visuals, however. The game does well for story, with a mysterious voice calling out to Asha in the game’s opening scenes, prompting her to head off to see Purapril XIII in her opulent palace in Rapadagna City. She, in turn, prompts Asha to head off in search of the land’s four guardian spirits. Finding those spirits takes place across four lengthy levels, each with a sub-boss halfway through, before the arrival of a more memorable proper boss at the end. The journey to the bosses, though, is largely forgettable. There aren’t many set-pieces at play which would live long in the memory, and generally you have to fight off a few enemies and simply figure out how to reach, say, a chest containing the bomb you need to blow away the boulder which prevents you reaching the next area. The game’s best bits are undoubtedly the boss battles and the bits in the bustling city – the rest won’t be thought of again after you’ve gone past them. The one thing to keep you busy along the way is to collect Life Drops, with each ten increasing your max health. There’s a finite number and the game tracks how many you’ve found in each level, but completionists will be the only ones needing to replay any levels.

The jump from Wonder Boy III to Wonder Boy: The Dragon’s Trap was naturally a bigger leap than the one made from Monster World IV to Asha in Monster World; after all, the third Wonder Boy game was originally a Master System title, so there’s a whole console generation of advances which gave Monster World IV a head start. But that head start has not been converted into an unmissable experience this time around. Going to such great lengths to stay close to the source material has resulted in a finished product that while looking impressive, lacks the firepower under the bonnet to be in any way a heavyweight competitor in a packed field of platform adventure games on the Switch. A physical release will propel the game somewhat, but there are a lot of better examples of the genre on Switch. Go and find them.

Wonder Boy: Asha in Monster World should be looked upon as an example of what a 25-year-old game could look like with the graphical technology of today. It doesn’t veer far from the source material, though, so the game itself feels basic compared with what the modern-day gamer is used to.