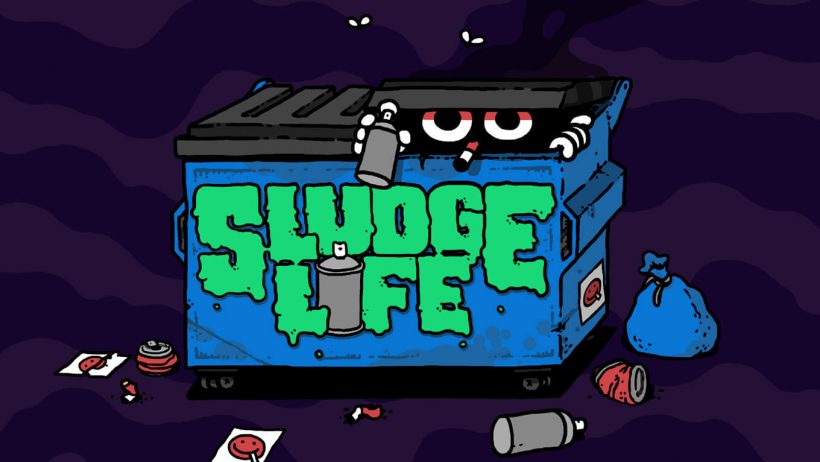 There were several times during my playthrough of Sludge Life, the “freaky artistic expression simulator” from developer High Hell and publisher Devolver Digital, that I was completely lost. With nothing in the way of overt goals save for a vague checklist on the pause menu, and the strange, hilarious words of the game’s inhabitants to guide you, this is an experience meant to be savoured, not solved. But even with such a strong sense of character and a signature style, does this game do enough to justify a purchase? Let’s wade into the sludge and see.

There’s no way to summarise Sludge Life that does it justice, but as its simplest, you play as a graffiti artist called GHOST who explores a weird island in the middle of a sludge-filled planet. As you explore the island in first person, you’ll quickly notice the title’s simplistic, polygonal 3D art style and strong character designs, all brought together with a heavy VHS effect overlay that makes this title feel nostalgic for old skateboarding tapes and home movies. With no strong instructions and no obvious markers, it really is up to you to explore as you see fit, and this is when the magic of Sludge Life comes together.

After spending a few frantic minutes trying to figure out exactly what I was meant to be doing, I bumbled into a few characters and conversations, tagged some buildings, found a snail, and then realised there wasn’t any rush to really do anything. I was having more fun simply exploring the sludge-laden wastelands and bumping into the many weird characters and scenarios on offer. While there really isn’t much in the way direction however, there are still plenty of things to find as you explore.

Sludge Life is brimming with weird characters, in a very particular visual style, each with irreverent and interesting dialogue that constantly made me laugh. With fart gags, drug use, musings on capitalist society, and pondering on the meaning of life, the world of Sludge Life is a mature one, and the topics of discussion even more. From the very beginning you’ll also discover that, as well as being able to pee in any urinal you find, you’ll also be able to smoke cigarettes, take mushrooms, and discover some other heinous undercurrents to the world. It’s a strange psychedelic mixture of overtly mature jokes in this visual style, but it works together and only accentuates the funnier parts of the title.

To actually try and play Sludge Life, you’ll be using a camera to scope out tagging spots to hit with your graffiti emblem, and trying your best to climb and break your way into hidden areas. There’s a huge amount of areas to spot, with rewards along the way for particular milestones. You even unlock different items that help with traversal, even if it all feels quite clumsy. Sludge Life isn’t a competent platformer, especially when it’s entirely first-person, but it’s serviceable enough for the aims of the game. The later items that open things up make it a breeze to explore and get those more hidden graffiti spots, as well as plenty of warp locations. The game sadly doesn’t do much to separate the different areas in visual style, but there’s still some really interesting corners to discover and I don’t think I’ve seen anywhere near all there is in this rich game, despite it being a fairly small map.

Alongside the arresting visual style is an absolute KILLER soundtrack, I mean I can’t stress enough how great it was and how much it enriched my time. I found myself getting into the spirit of literally just hanging out, taking my time to chill with different characters and enjoy the diegetic music playing out of various devices jotted around. Its lofi, synthwave beats really helped to perfectly meld the visuals and dialogue to bring this surreal world into a realistic and charming clarity. Seriously, this world feels like a real place full of lived experience and all the gross problems and weird people a small town often includes.

It could be over in minutes if you know what you’re doing, but it’s such an interesting game I can’t recommend enough you take your time and discover every item, collectable, hidden corner and NPC for yourself. There are even strange rewards to be found including mini-games and apps for your laptop. It’s truly a ride. The only thing marring my experience was some technical issues, particularly in handheld. The graphical fidelity seemed to dip and there were some real issues with pop-in as well. I can’t say it marred the experience as it’s a slow and dialogue-driven game, but it was noticeable and worth mentioning.

Sludge Life is a weird, slow and often confusing game, but it also has the strongest style in any game I’ve played this year. Between the distinct visuals, outstanding soundtrack and the countless weird characters you can meet, though, I wouldn’t recommend it to everyone, Sludge Life is a one of a kind experience and a world I won’t forget.

Gross, weird, and consistently hilarious, Sludge Life is a satirical lens on very particular types of youth culture, but it’s also an experience I won’t forget anytime soon. Plus, it’s almost worth the price for the soundtrack alone.