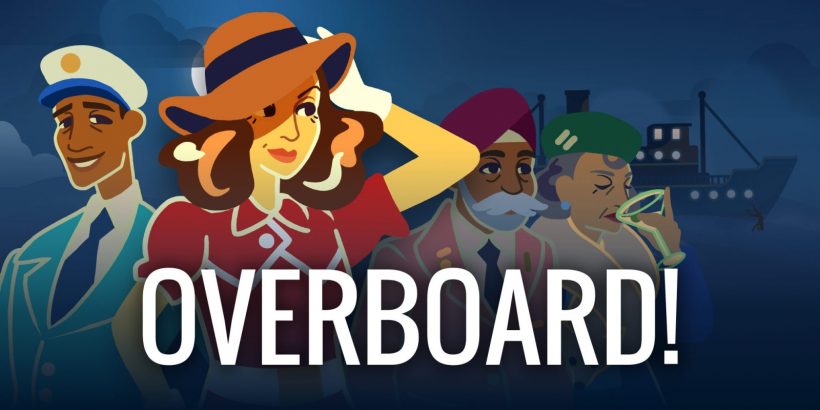 Veronica Villensey, as if her surname wasn’t already suspect enough, has just committed murder. Recently married to a wealthy socialite and about to enjoy her honeymoon, the free world of America had barely come into view before she tipped husband Malcolm over the edge of this luxury cruise liner. The difficulty now is trying to get away with it. Unfortunately for her, the SS Hook is full of snoopy passengers each holding their own secrets close, and privy to poking around in other people’s business. Thus the stage is set for a suave and sophisticated murder mystery adventure, one that feels right at home on Nintendo Switch.

Agatha Christie aficionados are sure to get a kick of this archetypical “whodunnit” visual novel, especially since it’s a period piece that takes full advantage of the 1935 backdrop. Outfits are classy, diamond earrings are a key bit of evidence, and countless other design elements ground you in an overall grandeur of the ship-based setting you’ll soon become awfully familiar with. The art design is cartoonishly simple, yes, but it works well to give Overboard! a pompous feel, and helps prevent the tale from ever becoming too bleak despite the relatively dark subject matter being explored.

Getting away with murder in Overboard! is as simple as communicating with the boat’s other inhabitants the morning after the bloody event, traversing its handful of different areas and, of course, getting accustomed to the tight 8-hour schedule. It’s also important to make decisions and select dialogue options that won’t link you to the scene of the crime. Otherwise it’s only a matter of time until Villensey is sent to the slammer, along with any other accomplices you meet along the way. You quickly learn the patterns and routines of the folk who can aid or hinder you, and much of the fun is learning in what order to approach them.

On my first playthrough I tried playing Mrs. Villensey as dumb, feigning forgetfulness whenever I was questioned about my husband’s whereabouts or what we both got up to last night. I quickly discovered that this tactic only gets you so far when hard-boiled evidence or an eyewitness places you directly at the scene. In these circumstances, unmitigated denial simply won’t work. Runs typically last five minutes but the game knows there is a lot of information to retain at once, so included is a simple checklist which helps direct you towards new, unexplored avenues.

Just when you think you’ve done the impossible, having mastered the daily routine to get away scot-free, Overboard! throws in other curve balls that inspire you to go back in and pull off an even more perfect crime. Turns out faking a suicide isn’t enough, as claiming the insurance money means pinning it on someone else and avoiding any blackmailers. Such extra objectives offer an added layer of challenge, tasking your timings and general knowhow even further.

What Overboard! lacks in length and scope it more than makes up for with a charming sense of wit and style. It doesn’t outright reinvent the visual novel or murder mystery genres, but it does offer up a bite-sized interpretation of both that will get you thinking creatively about how to achieve the perfect crime. Refuse and you’ll end up like your husband: sleeping with the fishes.

Overboard! is a short but sweet murder mystery adventure with lashings of sophisticated style and an addictive gameplay loop. There’s always something new to see when playing the same day over and over again by making different choices and decisions.