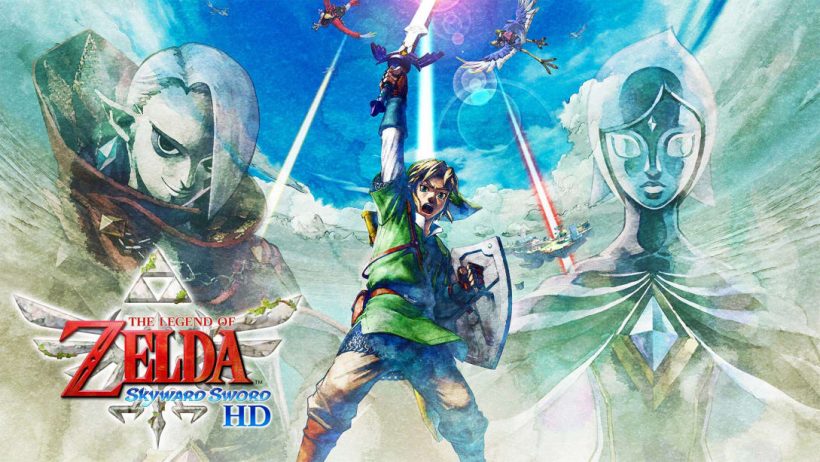 To most people, falling through the air is something to be feared. The wind rushing past your face, having absolutely no knowledge of what awaits you beneath the clouds — it’s not hard to imagine how such a leap of faith could potentially end in disaster. For Link, however, it’s something to look forward to. Because every time he steps off of Skyloft’s floating structure, sure to be caught by his trusty bird buddy, he knows that adventure awaits. Even now, almost a decade later, The Legend of Zelda: Skyward Sword still excellently captures this sense of bravery mixed in with the exciting unknown. Now it shines more so, thanks to an improved frame rate and an HD lick of paint.

If you’re someone whose entry point to The Legend of Zelda was Breath of the Wild, the first thing to mention is that Skyward Sword is, in many ways, the absolute stark opposite of that. Originally released to coincide with the franchise’s 25th anniversary back in 2011, this sky-based adventure is almost slavish to a fault mechanically, playing like a greatest hits album of everything that’s come before as opposed to taking risks. Set piece dungeons? Check. An inventive grab bag of key items to use? You bet. Elements like these do well to pay tribute to the many Zelda games that came before it, sure, but it does mean that players used to gliding anywhere and everywhere in 2017’s epic journey may find themselves a little suffocated. Despite this, Skyward Sword isn’t without its charms.

Rather than surprise from a pure gameplay perspective, Skyward Sword is notable for innovating most on the narrative front. Weaving a tale set at the very beginning of the Zelda timeline, here there’s no Hyrule to explore and no Ganondorf to defeat. Instead you’re thrust into a totally new setting full of colourful sights and characters, most of which won’t fail to charm if Skyward Sword HD is indeed your first visit to Skyloft and the surface world below. Witnessing how hallmark Zelda elements like the tri-force, master sword and others all came to be is part of the fun in this Link and Zelda origin story, and it’s still a great way to commemorate the series — now for its 35th anniversary!

Skyward Sword HD is a remaster in the truest sense, meaning that most of the biggest amendments come in the form of quality-of-life changes and a rather impressive graphical overhaul. The latter, in particular, works wonders in terms of drawing your eye and keeping you immersed. Because while the Nintendo Wii paved the way forward for motion controls, it was easy to see (even back then) that Skyward Sword was a game that could only be fully enjoyed in at least 720p video output rather than standard definition. Now we finally can do so, and the result is locations that appear more vibrant than ever, aiding towards the game’s almost fairytale-like atmosphere.

Of course, being a 10-year-old game means that Skyward Sword HD can never quite fool you into thinking it’s a contemporary release. Yet, even so, the extra sheen works brilliantly to show off the allure of the art style, making this HD-ified version now the definitive way to play Nintendo’s most misunderstood Zelda entry. Also aiding this is the increase in frame rate. Skyward Sword HD is now only the second game in the series to run at a silky 60fps after the Nintendo 3DS’ Link Between Worlds, managing to best even the Wii U remasters for Wind Waker and Twilight Princess. This subtle detail makes for a smoother gameplay experience that better draws your eye in, fully displaying Link’s moves like rolling, swinging and clawshot dashing with the appropriate grace.

Those familiar with the original version of Skyward Sword will no doubt have their gripes with pacing. Well, I’m pleased to report that most of those have been consciously done away with here, with several revised design decisions resulting in much better flow. One of the biggest annoyances previously, for example, was in how the action would halt every time you pick up a rupee or monster piece, no matter how many times you’ve collected one before. In Skyward Sword HD it’s handled much more responsibly, with any item simply appearing above Link’s head to indicate that it’s been picked up.

It is unfortunate, however, that pure fast travel is locked behind the Zelda & Loftwing amiibo. Not just because said amiibo is incredibly scarce and an additional cost on top of the game’s price, but also because having to tap a figure to swiftly move between areas is cumbersome. I’ve never been a fan of entering menus to deploy amiibo abilities at the best of times, but at least in Breath of the Wild those that were compatible weren’t tied to such a key quality-of-life facet. Having said that, finding a bird statue to return to Skyloft isn’t as much of a bothersome as it sounds. Plenty are littered about, just like in the original, and you’ll need to visit them regularly to save anyway.

Despite being shined up and polished for the Nintendo Switch, Skyward Sword HD never fails to remind you that it initially started out life as a Wii game. It is most evident in the controls and how combat is handled, where sword swings were previously tied to directional motion swipes. Here they still are should you choose to play the game using Joy-Con controls. They work just as well as they did before, in which raising your hand high can charge up a powerful Skyward Slash and stabbing and slashing works well as an extension of Link’s arm. But how do the button controls handle?

If you opt to play in handheld mode or use a Pro controller when docked, Nintendo’s workaround to making button inputs feel authentic is actually pretty smart. Swinging your sword in the desired direction is as simple as flicking the right analogue stick. This, when used with the lock-on function tied to ZL, is a clever way to translate the Wii’s motion controls. So much so that getting past enemy shields and performing spin attacks feels as fun as it ever did. Less successful is Skyward Sword HD’s approach to free-aim. You see, rather than bind it to the right analogue stick like most modern day third-person action games, swerving Link’s view requires you to hold down L. I can’t help but feel like doing the reverse and using L when wanting to draw your sword would have been better. But hey, it mostly works and isn’t a deal-breaker.

One of the major ways Skyward Sword HD separates itself from Breath of the Wild is through the inclusion of traditional dungeons. Because, while the three major zones you get to explore aren’t by any means as freeing as the destroyed Hyrule there, you at least get to indulge in some of the franchise’s best ever large-scale puzzle boxes. All riff on a different elemental theme and will test your understanding of a particular item, requiring you to overcome logic and combat obstacles until you reach that fabled “ah-ha” moment.

Early dungeons like the luminous Skyview temple may start off basic, but really from the Ancient Cistern onwards its wall-to-wall bangers. Whether you’re pinging time crystals to constantly shift backwards and forwards in time within the Lanayru Mining Facility or using a boulder to avoid liquid hot magma in the Earth Temple, Skyward Sword HD ensures you hardly ever do the same thing twice within these big set piece machines. The rest of the game may be extremely linear and hand-holdy when out in the main areas, but it’s when indulging in this classic Zelda staple that everything opens up.

The Legend of Zelda: Skyward Sword HD won’t change the minds of naysayers who always had issues with it. However, those yet to play arguably the most traditional of Link’s adventures now have an improved way to do so, benefiting from shinier graphics, an enhanced frame rate, and the option to play with either motion controls or new — but just as effective — button inputs. It serves as a reminder that the classic series structure can work in a modern context, even if contemporary games have now taught us to expect more freedom. Dive off the edge into this storybook adventure, though, and you won’t fail to be charmed.

Motion control-fearing players finally have a way to satisfyingly play one of Link’s most misunderstood adventures. A few design elements can annoy and now feel archaic, sure, but Skyward Sword HD is well worth another stab on Nintendo Switch.