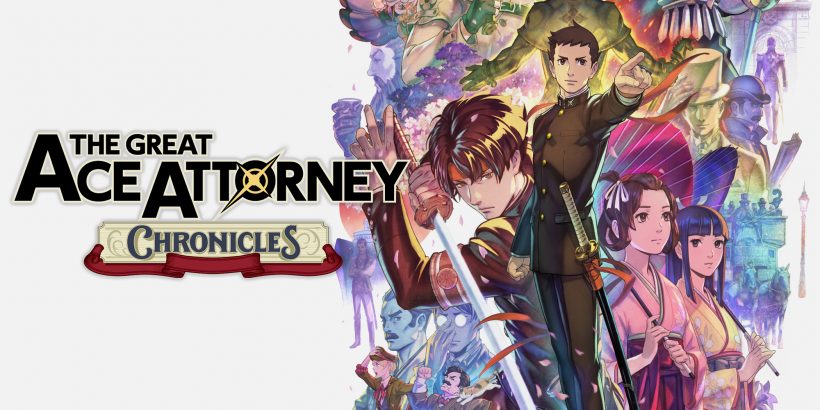 The Ace Attorney series is back with this latest instalment, The Great Ace Attorney Chronicles. This double offering of judicial adventures lets players take control of Phoenix Wright’s ancestor, Ryunosuke Naruhodo. Previously two separate releases, exclusive to Japan for the 3DS, this title combines both games into one massive tale for the Nintendo Switch.

Set in 19th century Japan and Great Britain, The Great Ace Attorney Chronicles plunges us into a time where the culture of each country is changing rapidly. Western influence is starting to take hold in Japan, and this plays a significant part in the game’s narrative. The story is easily the game’s strongest asset, with a particularly memorable cast of characters and plenty of twists and turns, as you’d expect from an Ace Attorney game.

The plot opens with our protagonist on trial for murder. A British professor has been shot, and you’re the one found with the murder weapon. It’s up to you to defend yourself in court, and from there the story unravels into a winding journey. Along the way you’ll be drawn into a web of international conspiracy, delicate relationships between allied nations, and plenty of gruesome crimes.

The bulk of the gameplay involves reading text or examining objects to solve the puzzle of each case. You have a court record with evidence and a list of people involved, and you’ll be prompted to provide evidence or find inconsistencies in witness statements to keep your case moving. You’ll get to investigate outside of court too. Generally these sections require the player to examine an area for clues to use later in the trial, but they’re not quite as compelling as the trials themselves. Another feature is the ability to pit members of the jury against each other to sway them to your side, and this is a great change of pace. Watching their opinions switch as you lay down your argument never gets old.

As someone who hasn’t had much experience with the Ace Attorney franchise before, I was pleased to find that this title really hooked me. The gameplay is simple and, although there are points where a case can drag on a little, it’s never long before another twist pulls you right back into the mystery and intrigue. Not every case is equally strong, but many of them were excellent from start to finish. There are real stakes on the line, and those moments where you uncover crucial evidence never cease to excite. You can really feel the weight behind each case. You’re not just uncovering pieces of a puzzle, you’re fighting for your client’s lives, and each character is so well-realised that you can’t help but feel immersed in their stories. When you finally get to yell “OBJECTION!” at the prosecution, it’s as satisfying as gaming gets.

Being two games in one, The Great Ace Attorney Chronicles provides a lot of value for money. Each case takes at least a few hours if you’re reading all the dialogue, and there are five chapters in each of the two games. There’s plenty to get stuck into, and it’s well worth the asking price if you’re a fan of story-driven titles. There’s a lot of bonus content too, like a collection of soundtracks and concept art which was surprisingly fun to peruse. There are even unused versions of songs to listen to, and it was quite interesting to compare the original and finished versions of each track.

The soundtrack itself is great, and the art design for each character is superb. Every character has their own set of unique quirks and traits that set them apart. From the elegant Englishwoman with a live swan atop her hat to the famous detective, Herlock Sholmes, each character is as memorable as they are eccentric.

Sholmes has a large part in the story and gameplay, and his deductions are the most enjoyable part of the investigations outside of court. Typically, the great detective will swoop in and boldly proclaim he knows the answer to the case, before pointing out a plethora of details. Unlike the detective he’s based on, however, his deductions are usually way off the mark, so it’s up to you to correct him and find the real truth. These moments help provide a bit more excitement to the investigations, which was definitely needed as they feel a bit bland otherwise. That said, the stories as a whole are great, and the investigations are a key part of that.

Even if you’ve never played an Ace Attorney game before, I’d highly recommend this title. It has all the charm and wit fans have come to expect, a story packed with emotion and high stakes, and a colourful cast of characters. The 3D animation is enjoyable and helps the game feel more lively than other visual novels. The gameplay, especially the trials and deductions, is a joy to experience (despite its simplicity). Watching the stories unfold was fantastic, and I found myself eager to learn the truth in each and every one of them. You get a lot of lawyering for your money, and one of the best narratives on the Switch too. No objections here.

The Great Ace Attorney Chronicles is well worth your time, offering one of the most compelling stories on the Switch. It’s refined, charming, and engaging, and a great experience for newcomers and fans of the Ace Attorney franchise alike.