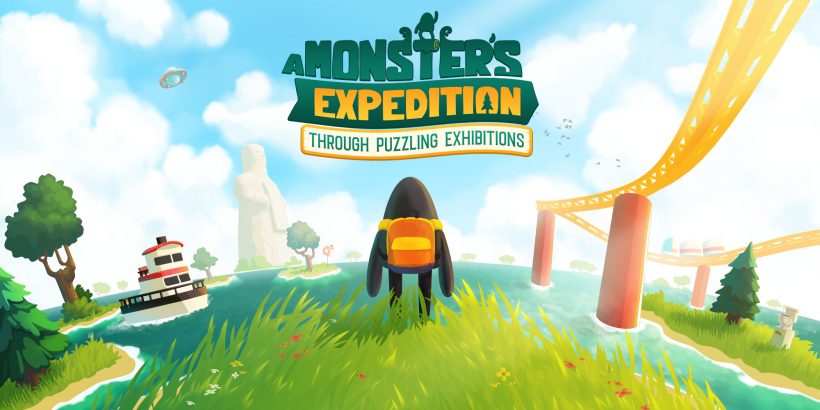 A Monster’s Expedition is a top-down, turn-by-turn, grid-based puzzler. But there’s a twist in this tale: it’s set in an open world.

The game is a Sokoban-like: you’ll be pushing objects around a 2D space, aiming to get them to certain spots without getting them stuck. Those objects are tree trunks, and your play area is one of many connectable islands. Trees can be rolled or flipped over, depending on which direction you push them from. When rolling, they’ll continue until another object stops them or they reach water, hopefully acting as a bridge to the next island. You can also combine them to make rafts which provide limited travel.

You’d expect each level to be designed to fully utilise these few mechanics, and you won’t be disappointed. It’s always impressive when a game creates so much possibility with so few moving parts and, in a puzzler, it helps build a sense of challenge. As soon as you spot patterns emerging, a nuance subverts them.

A Monster’s Expedition makes great use of modern techniques: you can undo moves or reset the current puzzle, save is automatic, and fast-travel points allow you to navigate with ease. Combining these factors helps to make the vast world an enjoyable one to explore.

It also wins big with some excellent writing, delivered via museum exhibits from a pre-monster world. These snippets are full of self-deprecating British humour which may get lost on some, but serves to put a distinct identity on an otherwise barren land. This world can be quite lonely, save from the odd tentacle.

The exact meaning of “open world” is contentious. A Monster’s Expedition describes itself as such, but your own interpretation will affect how you approach the game. In fact, a slight misunderstanding on my part caused a lot of wasted time, back-tracking when I didn’t really need to.

The map is enormous, with a sense that it can be explored in any direction. But there’s still one main path leading you from start to finish. The nature of puzzle games is that it’s easy to get stuck. However, open-world games typically embrace the idea of getting stuck, and succeed most when they clearly indicate to the player what they might need to do in order to progress. There’s a vital ‘footsteps’ symbol on the map indicating the next part of the main path — miss this at your peril!

The way in which the game explains its core mechanics, though, is spot-on, utilising a well-refined technique that genres from platformers to puzzlers have increasingly adopted. There’s nothing resembling a tutorial, the early levels are merely designed to teach through play. It’s an approach that helps to maintain the illusion of the world you’re placed into. Even when later levels introduce new elements, they’re presented in such a way that they’re understood immediately.

A Monster’s Expedition is everything committed puzzle fans are looking for: a series of brain-teasing challenges wrapped up in a beautiful presentation. The open world may not be perfectly realised, but it’s more than just a gimmick.

A Monster’s Expedition shakes up the puzzling genre with an enormous map, combining tiny individual puzzles with an empowering sense of exploration. Gorgeous graphics and witty writing mean it mostly succeeds, let down only slightly when its ambitious scale becomes daunting.