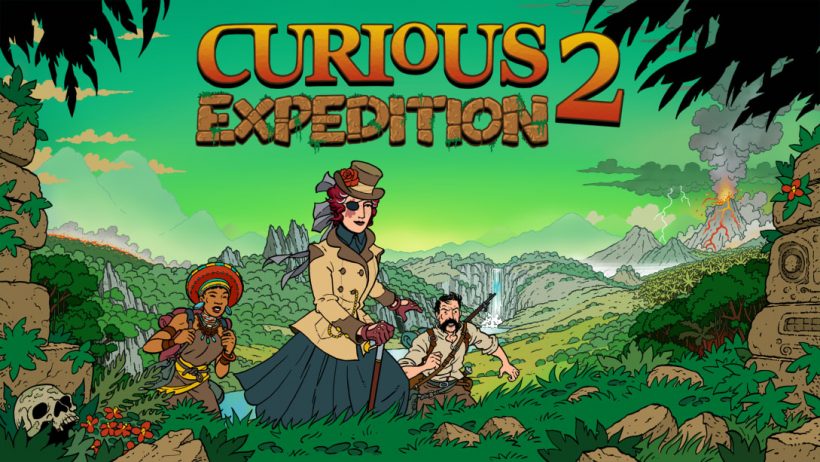 The rogue-like genre is an acquired taste. The best games in the genre take the gameplay loop and ensure each run feels better than the last, naturally strengthening your understanding of the game’s mechanics. Curious Expedition 2 falls short of greatness, with features that quickly become stale despite the genuinely enticing narrative woven through the game.

Set in a reimagined version of the late 19th Century, Curious Expedition 2 takes turn-based rogue-like gameplay and combines it with an exciting story. You explore procedurally generated maps to complete objectives and search for treasure, weighing up risk and reward as you go. A sanity system acts as a constant foil, alongside a myriad of random features and events that make each expedition a measure of tactics and greed as you consider what is worth the risk.

The prologue is a brilliant introduction to its various systems as well as the enticing narrative. Acting as a basic tutorial, it does a great job of guiding you through some of the most important mechanics without being too overbearing. Each new mechanic is well-spaced out, so you don’t have too much information thrown at you at once. It’s all presented in a concise chunk of gameplay that accomplishes its goal quickly, leaving players plenty to experience for themselves. Most importantly, this opening sets up an intriguing narrative, its various mysteries key to keeping you hooked through the rest of the campaign.

The story is where this game really shines, with the hand-drawn art style making it feel as though you’re flicking through the pages of some grand adventure book. The story itself is full of weird and wonderful ideas that make that sense of adventure palpable; however, it isn’t without its drawbacks. The game contains real-life historical figures such as Sacagawea, with one becoming a rival throughout the campaign. This is a fun idea in theory; however, your rivalry soon becomes a bitter one. Unloading attacks on Sacagawea feels wrong and the game can paint these historical figures in a negative light that feels in bad taste. It’s a shame as when they’re on your side it’s certainly a fun little addition.

It’s the gameplay loop that drags things down. The procedurally generated maps are fun to explore at first, full of neat little events that have you going out of your way. After you’ve seen something a couple of times the novelty wears off. Each event has a limited number of outcomes, and the often luck-based dice system that decides whether you fail or succeed in something makes venturing outside your main objective less and less enticing as you progress.

An experience system encourages you to level up your party, however with conditions for said party members to leave being so easy to trigger, and the potential to prevent this near impossible at times during expeditions, you’ll find little point to investing in anyone outside your main character. Even the combat seems inconsequential, with the handful of encounters I had providing little reason to see them through.

Curious Expedition 2 is a fun adventure that will have you eager to see its campaign through to conclusion. That being said, it leaves little reason to return afterward. The gameplay loop soon becomes tiresome as you encounter the same situations over again, with the lack of any real variation making everything feel stale. Fans of challenge may find reward in further runs of the game but for anyone else, this expedition is one best left in the past.

Curious Expedition 2 tells a story full of adventure and intrigue that sustains the game through its short campaign. The repetitive nature of the gameplay soon becomes stale however, offering little reason to extend your expedition beyond the main story.